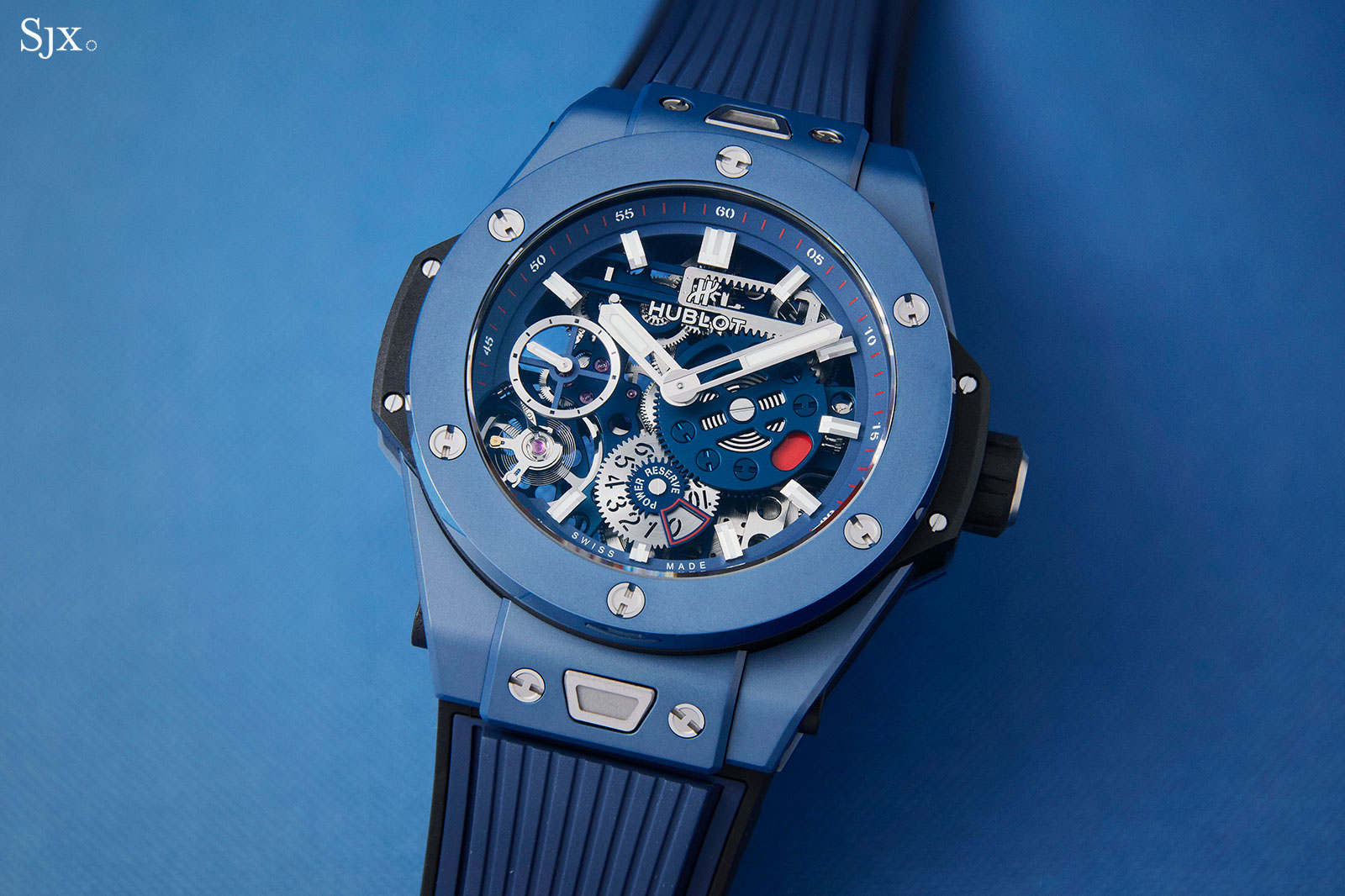 Long power reserve movements started getting more common in the early 2000s, notably at brands owned by Richemont, namely IWC, Jaeger-LeCoultre and Panerai. But now that they are fairly widespread, the long power reserve – a petite complication in watchmaking speak – is insufficient to be of interest in itself. The Big Bang Meca-10 Blue Ceramic solves the problem with an unusually constructed in-house movement that boasts a very visual power reserve indicator.

Despite being best known for its brash watches and celebrity tie-ups, Hublot has a lot of technical knowhow in its manufacture, particularly in the capable movement development department led by Matthias Buttet, the inventive constructor who was the driving force behind the defunct complications specialist BNB Concept. Mr Buttet and his team are the brain trust behind movements like the monster 40-day power reserve calibre inside the MP-07.

Hublot’s technical prowess, fortunately, also manifests itself in more affordable watches like the Big Bang Meca-10 Blue Ceramic. Though the big and blue ceramic case is overwhelming, inside is a hand-wound, in-house movement with a 10-day power reserve. Originally introduced in 2016, the HUB1201 movement is inspired by Meccano, the construction toy for children that’s essentially Lego in pressed metal with screws and bolts. Consequently the calibre has been open-worked in a geometric style, with repeating circular apertures cut into the bridges and wheels, exactly as on the pieces of Meccano.

From the back the movement looks machine-like, with three large linear bridges giving it a symmetrical layout. It’s dominated by two large barrels, open-worked to show off the long mainsprings within, and the wheel train in between. The look of the movement is definitely modern, being exceptionally clean and neat with zero tool or machining marks visible. Even the mainsprings are remarkably clean up close, despite being greased. All of that is no doubt a testament to the impressive manufacture in Nyon that Hublot chief executive Ricardo Guadalupe has put together.

The bridges have an almost smooth frosted surface, pressed bevels and a blue coating, while all the wheels are rhodium-plated and finely circular grained. And the future is visible in the escapement, which has a silicon escape wheel and pallet fork, both of which are visible on the back. On the front is where the elaborate design really kicks in. The watch has no dial save for a narrow chapter ring that carries the hour markers that float above the movement. Most of the landscape in front is occupied by the movement, which is asymmetric and visually complex. It’s a strong, appealing look at suits the style and spirit of the watch to a T, or more properly, an H.

The power reserve mechanism is entirely exposed, making it the visual highlight of the dial. A horizontal rack is driven by one of the barrels meshes with a large, blue-coated wheel that has its spokes in the shape of the Hublot logo, along with six “Hublot” head screws; a spring within the blue wheel keeps tension within the power reserve display. That in turn drives the numerical power reserve indicator, a disc with cut-outs of stencil font numerals that shows the days remaining in a red window. More pertinently, once the power reserve is closing in on zero, a red indicator appears in an aperture on blue wheel, a prompt to wind the watch. Though long power reserve movements like this can run until the very end, and perhaps for even longer than the stated power reserve, the amplitude of the balance wheels tends to fall slightly as the mainspring is almost flat, meaning timekeeping suffers marginally.

Also visible on the front is the balance wheel with its stock Etachron regulator index, which is the only pedestrian bit of the movement. While it is functional and easy to adjust, a custom regulator, “H” shaped no doubt, would have the cherry on top. The case is in classic Hublot style and a large 45mm in diameter. What makes it different from earlier iterations of the Meca-10 is the fact that it’s mostly matte blue ceramic. While other watchmakers have made a specialty of cases in coloured carbon composites, Hublot has gone far with brightly coloured ceramic cases, with the recent, all-red Big Bang Unico Red Magic being a surprisingly compelling watch.

Like the movement, the Meca-10 case is cleanly and sharply finished, with matte top surfaces with contrasting, polished bevels and flanks. Like most Hublot cases, the construction is a sandwich, with ceramic on the front and back with a matte black carbon composite inner case in between. While the sandwich construction combining two materials is Hublot’s trademark, a polished ceramic middle would be incredibly striking. Though the case is large, the watch has short lugs, which means it wears well, but with one caveat: the rubber strap has to be of the correct length in order for the folding clasp to sit on the underside of the wrist, since pin buckles are not an option for Hublot. And as with most Hublot watches, the case incorporates an easy quick-removal mechanism for the strap, with a button on the top of the lugs to remove the strap.

Though the Meca-10 is mechanically simpler than Hublot’s popular chronographs, the movement is arguably more interesting, both visually and mechanically. In the segment of sports watches equipped with modern style movements – think Hublot, Richard Mille, TAG Heuer et al – the Meca-10 is one of the few watches priced below six figures that has complex mechanics to match complex styling. In short, it has both form and substance.