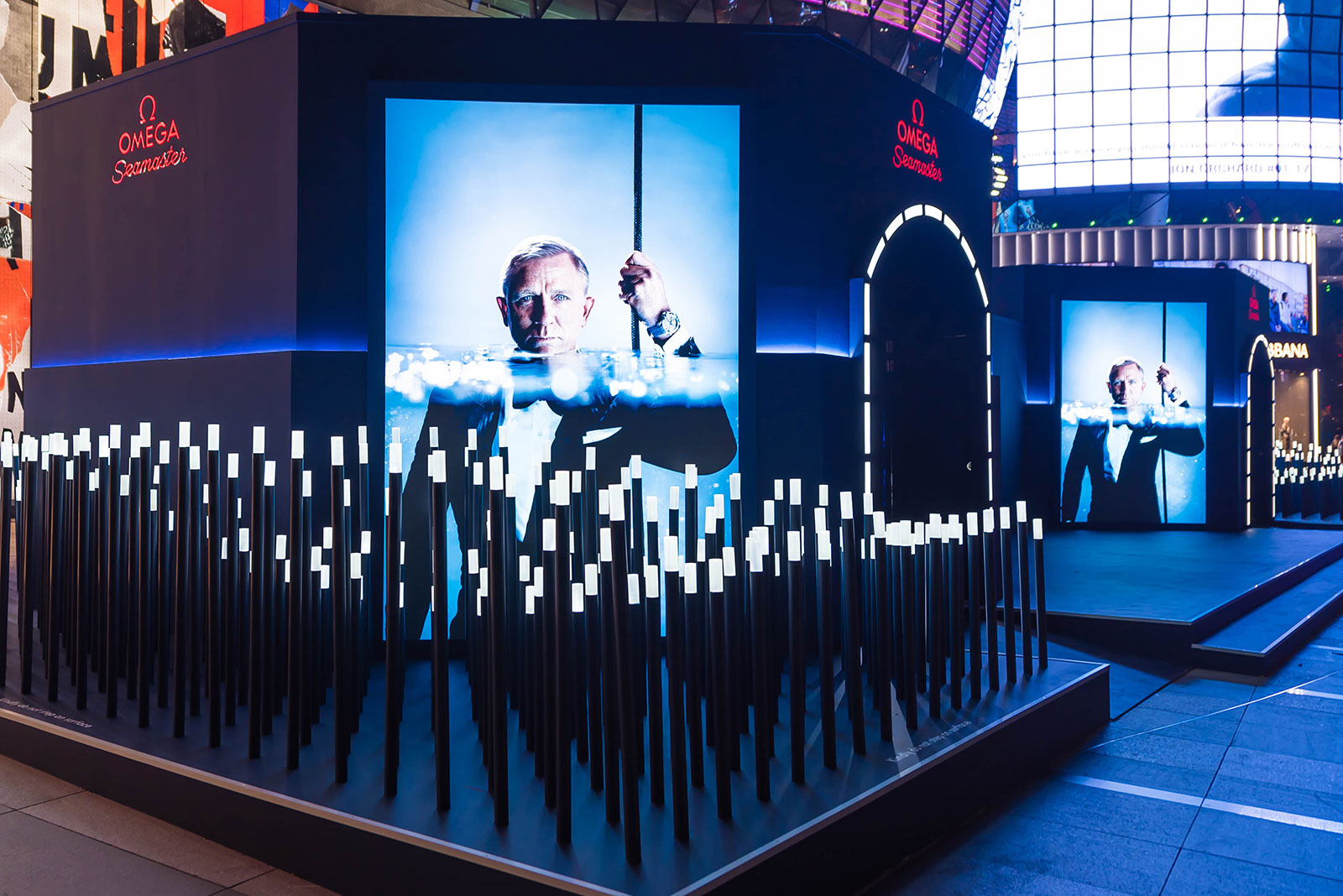 Located at the open atrium of ION Orchard mall, the exhibition includes a “heritage tunnel” that showcases 16 historically significant Seamaster models, including early bumper automatics, the Seamster 300 CK2913 and “Big Triangle”, the massive Ploprof, the less massive Seamaster 120m “Baby Ploprof”, and of course, arguably the most famous Seamaster in pop culture: the all-blue Seamaster worn by Pierce Brosnan when he first played James Bond in GoldenEye.

The exhibition also touches on Omega’s prominence in military timekeeping, including the British military-issue Omega “WWW”, short for “wrist, watch, waterproof”. One of the “Dirty Dozen” – military watches supplied by 12 manufacturers to the British military in the 1940s – the Omega “WWW” found its way to the wrists of 110,000 pilots, naval officers and soldiers. The rest of the space is dedicated to the new Seamaster 300m Diver collection, essentially a heavily upgraded version of the Seamaster Mr Brosnan made famous as James Bond.

The line-up is comprised of 14 models, including six in stainless steel and eight in a mix of stainless steel and gold. Now a larger 42mm in diameter (for the mens’ version), the new Seamasters feature ceramic dials laser-engraved with a wave motif as well as ceramic bezels. More crucially, they are equipped with the Master Co-Axial cal. 8800 movement that boasts the lubrication-free Co-Axial escapement invented by George Daniels, as well as a magnetism resistance of over 15,000 Gauss thanks to the Si14 silicon hairspring and patented alloys for the escapement parts. Open till October 14, 2018, the Seamaster exhibition is open daily to the public from 10am to 10pm, and takes place just in front of ION Orchard, located at: 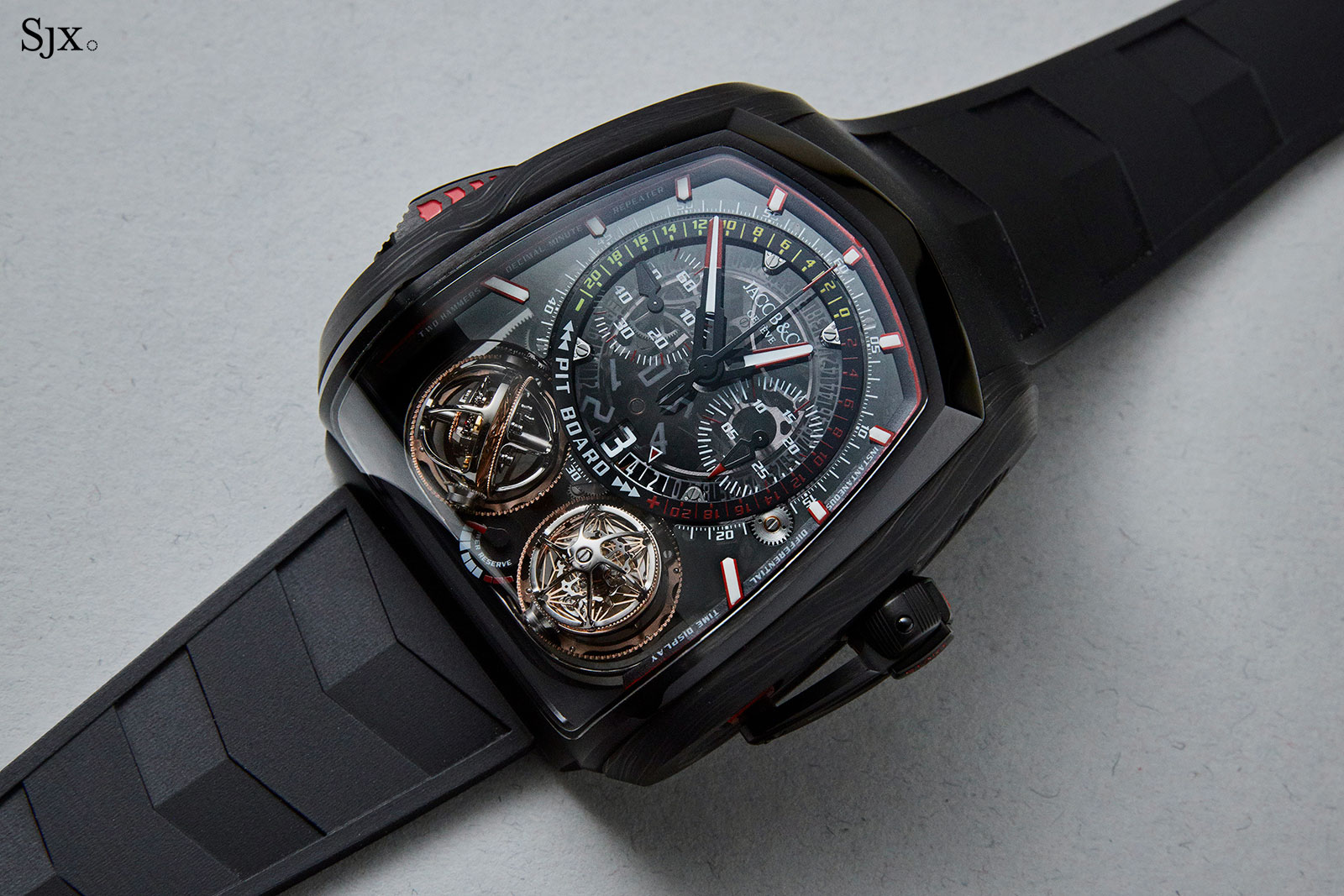 Jeweller to royalty and rappers, Jacob & Co. is behind some of the most audacious timepieces in watchmaking. While its gem-set watches keep the brand in the public eye, Jacob & Co. has applied its sense of style to complicated wristwatches that aren’t for the faint of heart.

An extreme example of its maximalist taste was unveiled earlier this year, the Twin Turbo Furious, which not only stacks up the complications – minute repeater, chronograph and twin tourbillons – but also does them in an exotic manner. The minute repeater is of the decimal variety, while the tourbillon regulators are flying, triple-axis and high-speed.

This powerhouse watch is actually a followup to the original model of 2016, which was merely a Twin Turbo; the “Furious” suffix refers to the added mono-pusher chronograph, with reference time differential indication, which is the third unusual complication inside. In short, it is a timepiece a person inclined towards modesty might describe as quite a lot of watch. In fact, it is arguably a watch that lives up to its looks and name; the complications live as large as the case.

Unusually, the Twin Turbo Furious movement was conceived by Le Cercle des Horlogers, a specialist located in Neuchatel, instead of Ateliers 7h38, the outfit responsible for most of Jacob & Co.’s complicated watches. The bulbous trapezoid case alone is made up of a staggering 88 components, measuring an enormous 57mm wide, 52mm lug to lug and 17mm in height. Pictured here is the all-black prototype in diamond-like carbon (DLC) coated titanium with carbon composite flanks, but the production watch is actually a combination of red gold and carbon fibre, which makes the watch even more noticeable. However, the titanium and carbon composite case is available as a custom order.

On the right side of the case is an unusual crank-handle to wind the movement, while the opposite end features the slide to activate the minute repeater. The case is topped by an expansive smoked sapphire glass that curves downwards at the front edge of the case, following its curvature, while the dial itself is also made of sapphire crystal. The most arresting feature of the watch is the pair of triple-axis flying tourbillon regulators, which sit at the bottom of the dial (with a small power reserve display in between them). As opposed to a traditional tourbillon that rotates about a single axis, the triple-axis tourbillon rotates simultaneously about three different axes. In an improvement on the earlier Twin Turbo, the tourbillons have been accelerated. Both rotate furiously – taking 24 seconds for one revolution on the first axis, eight seconds on the second, and 30 seconds on the third.

The multi-axis rotation means each balance wheel is never in the same position and is therefore theoretically immune to any effects of gravity. And both tourbillons are linked by a differential to produce a single, averaged rate, making the movement’s timekeeping more stable than that with a single regulator. But above all else, the tourbillons offering the extremely compelling visual spectacle expected of a very large watch. The Twin Turbo Furious also features a decimal minute repeater, which is perhaps apt for such an overtly progressive watch. The decimal system is a modern invention that is more intuitive as the time is struck just like how an analogue watch is read.

Instead of sounding the hours, quarters and minutes as a traditional minute repeater does, a decimal minute repeater strikes the hours, minutes in 10-minute segments, and the single minutes, making it straightforward to interpret. And like many modern day repeaters, it has a built in safety mechanism that disengages the time-setting mechanism when chiming is in progress, and vice versa. The third complication is the single-button chronograph that is fairly traditional in construction, relying on a column wheel and horizontal clutch. But linked to the chronograph is the most novel complication in the watch: a reference time differential indication. It was inspired by the timekeeping panels used in motor racing to show drivers the difference between their reference lap time and actual lap time.

The reference time is set via the crown and displayed in two adjacent apertures at six o’clock (just about “Board” in the photo below). The larger digit shows the minutes, and the aperture to its right indicates the seconds, displaying up to 5:59.

Once the chronograph is started and stopped, the “pit board” wheel that circles the dial then indicates the time difference between the recorded time and the reference time. A positive difference is shown with red numerals on the wheel, while the negative difference times are in yellow. The spectacular movement is the hand-wound calibre JCFM05, running at 3Hz with a 50-hour power reserve. It is made up of a staggering 832 parts.

Seen from the back the movement is constructed to look as complicated as it actually is. The style is reminiscent of Richard Mille and Audemars Piguet’s Concept watches, but intriguing nevertheless. It is constructed fairly symmetrically, with the hammers for the decimal minute repeater at top centre. Just below sits chronograph mechanism, including the column wheel on the left, with the regulator for the repeater directly opposite. At the bottom sit the pair of gilded, skeletonised wheels that drive the tourbillons.

Care has also been put into the movement decoration, with hand-bevelled bridges that have black polished surfaces, circular graining on the wheels, and polished countersinks for the jewels. The Jacob & Co. Twin Turbo Furious is a limited edition of 18 pieces in red gold and carbon composite (ref. TT200.40.NS.NK.A), priced at SFr525,000. And it’s delivered in a enormous box that resembles a supercar.

Update October 8, 2018: Text amended to include the fact that the movement is the work of Le Cercle des Horlogers .