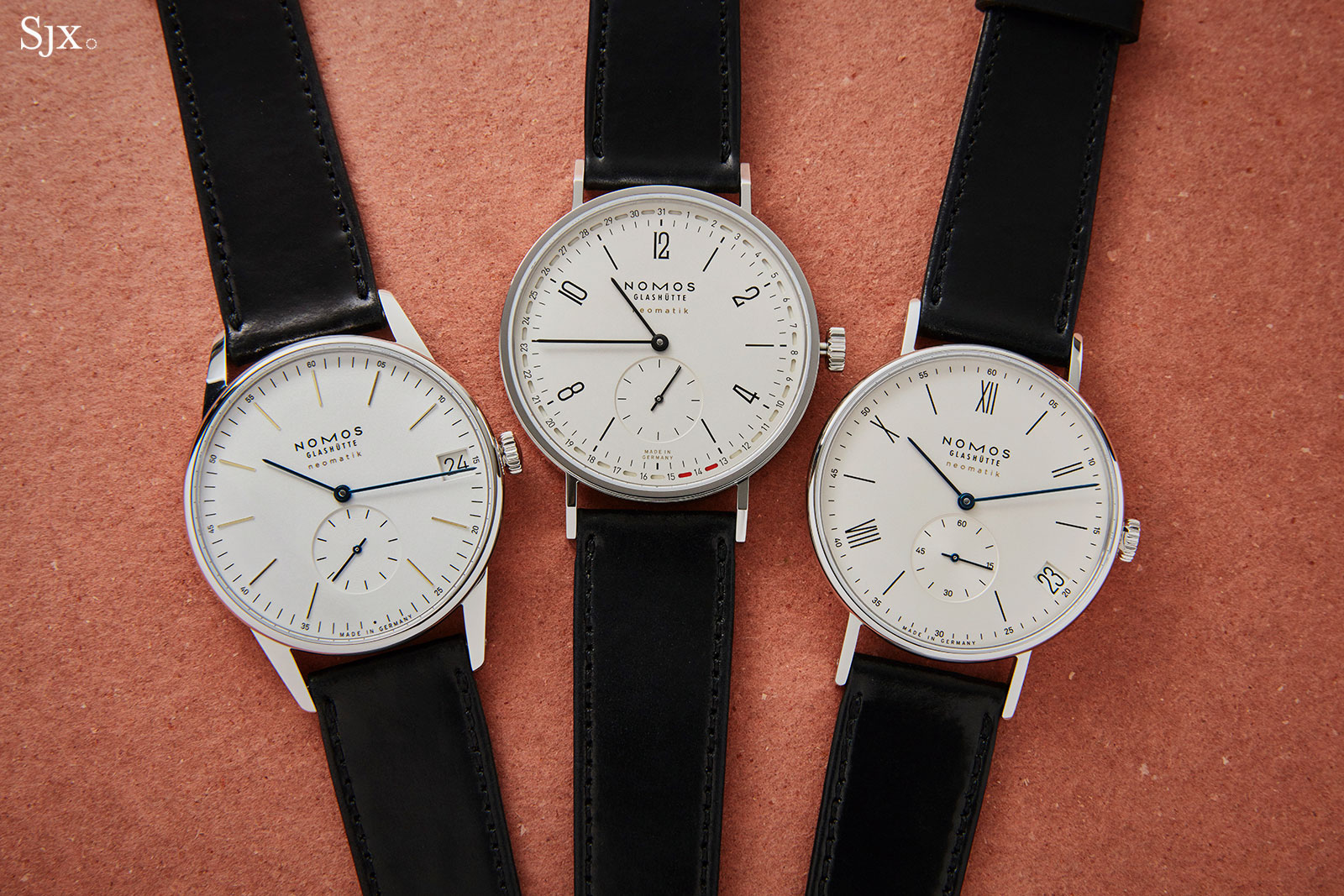 Nomos’ philosophy of incremental, but substantial, improvement in its watches is exemplified with the Neomatik Update collection. It’s made up of a trio of classic Nomos models – Tangente, Ludwig and Orion – each equipped with the newly developed DUW 6101 that is not only quite slim, but also features a bidirectional, quick-set date function.

This is not the first instance of a date function on a Nomos movement; several of its earlier generation in-house movements (like the Zeta for instance) were equipped with the same date mechanism that was relatively flat and sat around the movement, rather than on it. The date was slim and smart, but inconvenient because it lacked a quick-set function, meaning that the hands had to be toggled back and forth to advance the date.

The new DUW 6101 is based on the DUW 3001 of 2015, essentially a larger version of the earlier calibre. The additional date mechanism on the DUW 6101 (which is also found in the new Autobahn line) is also slim and smart, but is now quick-set via the crown, both backwards and forwards no less. In fact, the bidirectional quick-set date is a rare feat; there is probably no other watch at this price point with the function.

As before, the date mechanism is thin – the whole movement is just 3.6mm high – and also larger than the footprint of the movement, which allows the date display to be larger than usual. The downside of that construction, however, is that the subsidiary seconds sits fairly close to the centre of the dial. Despite being a straightforward function, the date mechanism is fairly elaborately constructed under the dial, a testament to Nomos’ attention to engineering detail. Beyond the date function, the DUW 6101 is accomplished in other areas. The power reserve is 42 hours, in line with the industry norm, but it has the in-house Nomos Swing System escapement, as well as regulation in six positions.

Like all Nomos movements, the DUW 6101 looks good through the display back. Effort has been made to dress up the movement, with all parts given an appealing, even if simple, finish. All of the finishing is likely done by machine, but it is well done. The embossed bevelling on the bridges is attractive, as are the stripes on the rhodium-plated bridges. A bonus decorative detail found on the DUW 6101, and not on other Nomos calibres, is the lettering embossed in relief on the rotor. Despite having the “41” suffix in their model names, each of the Neomatik Update watches is actually 40.5mm. It’s a good size by modern standards, though putting them amongst the largest watches Nomos ever made; the Nomos catalogue still has a large number of 35mm watches for men. And because all three have relatively long lugs, they feel larger on the wrist than most watches of the same size.

Notably, the date function has been implemented differently across the line. Arguably the signature Nomos watch, the Tangente gets the most unusual date display. In the words of its designer, Michael Paul, “I could almost leave the original Tangente design untouched, and the date [was] placed around Tangente’s dial as an addition”.

The date takes the form of a track sited on the edge of the dial, along with tiny apertures. A ring below the dial highlights the current date by filling the two adjacent apertures in red. Though novel, the date display is highly legibly and intuitive. As a whole, the Tangente is the most striking, thanks to the creative date display. The clean, cylindrical case and narrow, angular lugs also give it an unusual presence on the wrist, despite its simplicity. One upside of the date display is that it helps camouflage the distance between the sub-seconds and the edge of the dial, something that is much more prominent on the other two models. The Orion and Ludwig are slightly more conventional looking. Of the three watches the Orion feels like the largest, because it has the longest and widest lugs. The gilded baton hour markers on the Orion also lend it a slightly more traditionally upscale design, in the sense that someone with zero knowledge of watches will see it as being pricier.

And the Ludwig, with its Roman numerals and rounded lugs, feels the most classical, or even staid. All the watches, however, share the same muted colour scheme. The dials are a grained, silvery-white, with either blued steel or black hands, with “Neomatik” printed in gold. Hands-On with the Nomos Tetra neomatik

Upgraded with an in-house movement and a larger case, the Tetra is the latest addition to the neomatik line, complete with funky coloured dial accents.