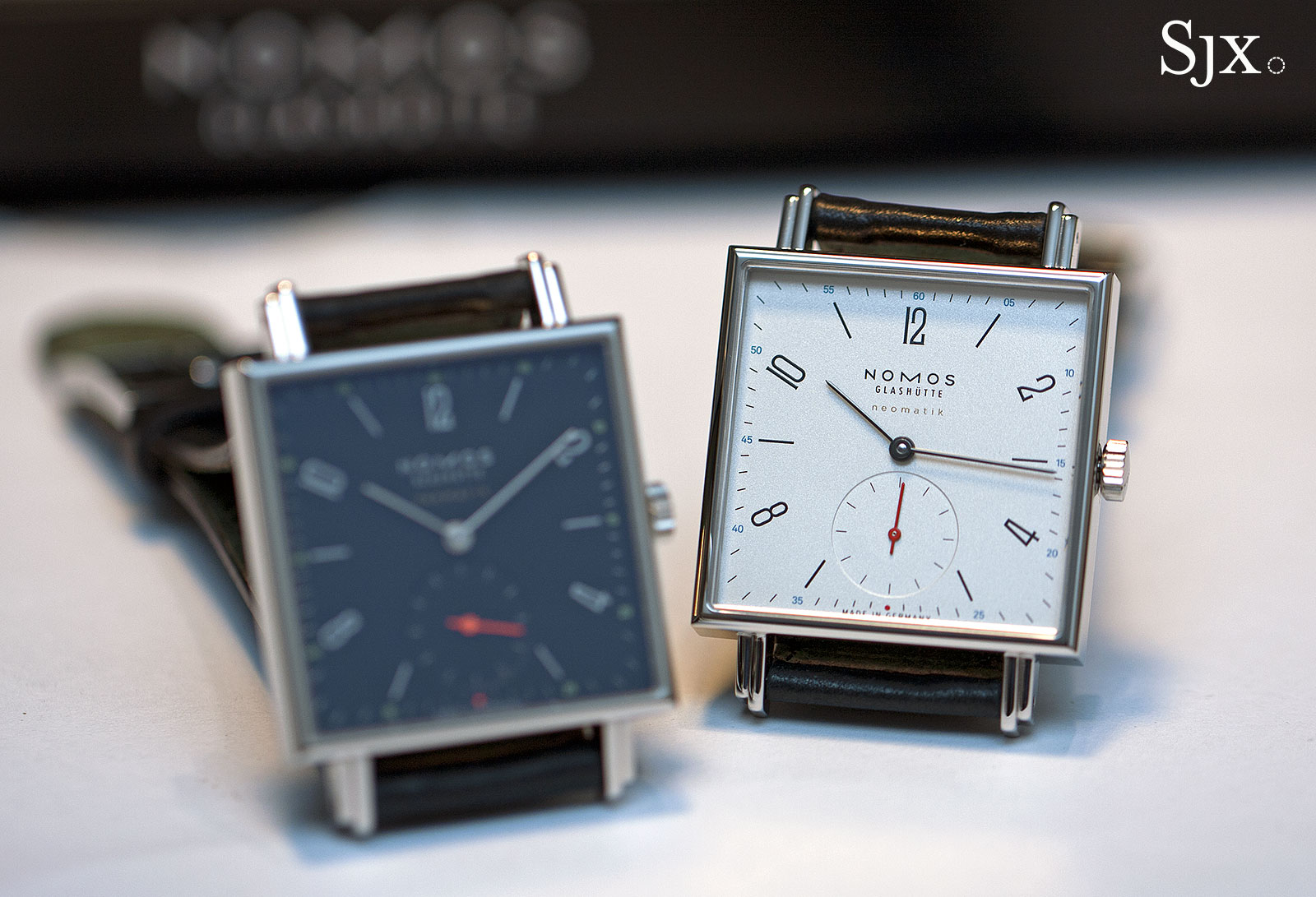 Originally available only in smaller sizes with a distinctly unisex look, Nomos’ square watch is now in a larger size catered for men. Measuring 33 mm by 33 mm (previously it was only 29.5 mm), the Tetra neomatik is not just a fresh face. Inside is the DUW 3001, the new flagship Nomos automatic movement, hence the neomatik moniker, applied to all watches equipped with the calibre. 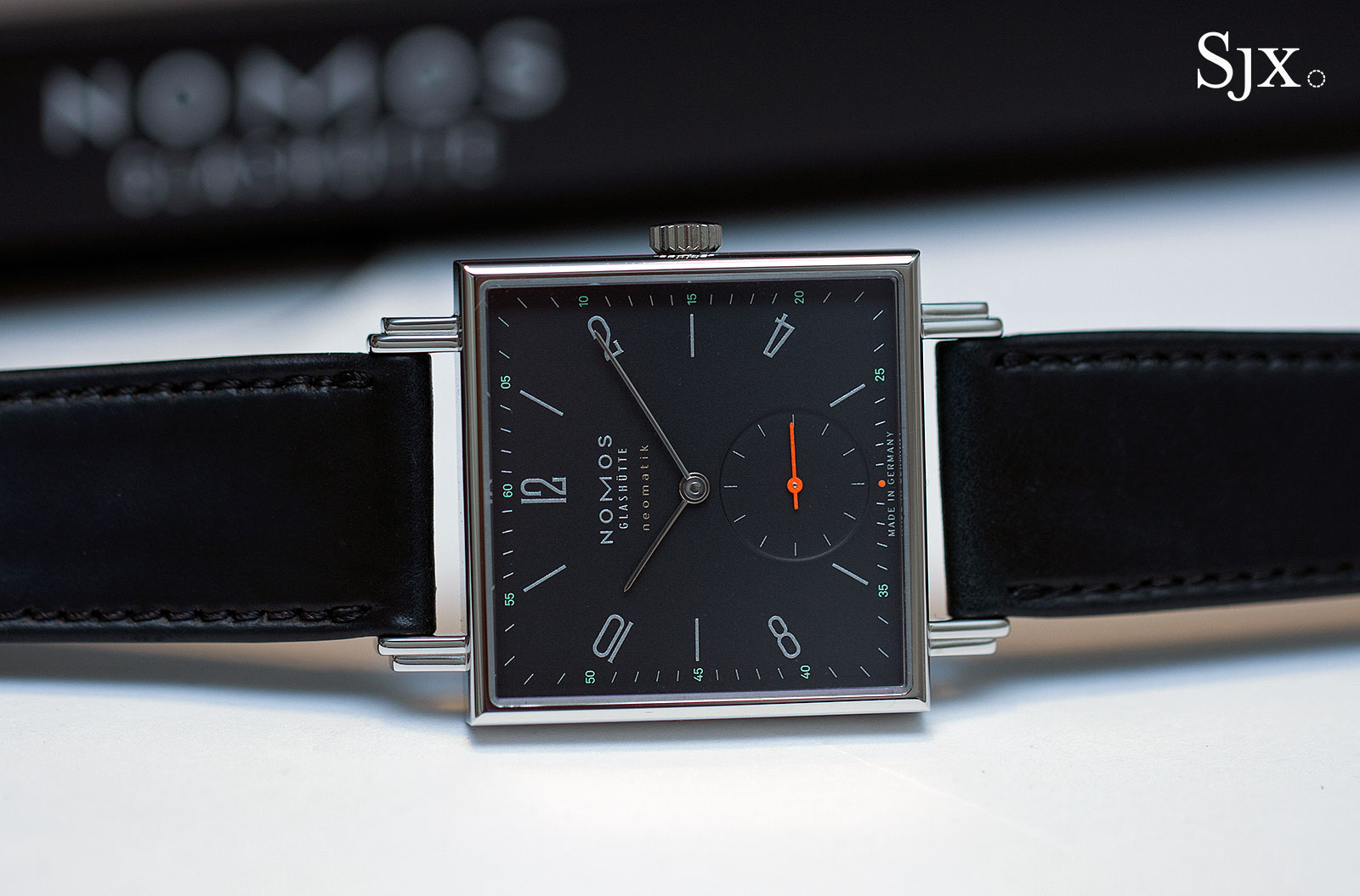 Though the increase in size each way is only 3.5 mm, the result is a larger watch with a significantly larger footprint on the wrist. Nomos cleverly kept the proportions and details of the case the same, so despite looking more masculine the Tetra neomatik still retains its Art Deco feel, particularly with the stepped lugs. Like all other Nomos watches the case is simply made and finished (most of the effort is put into the movement), polished on all surfaces. 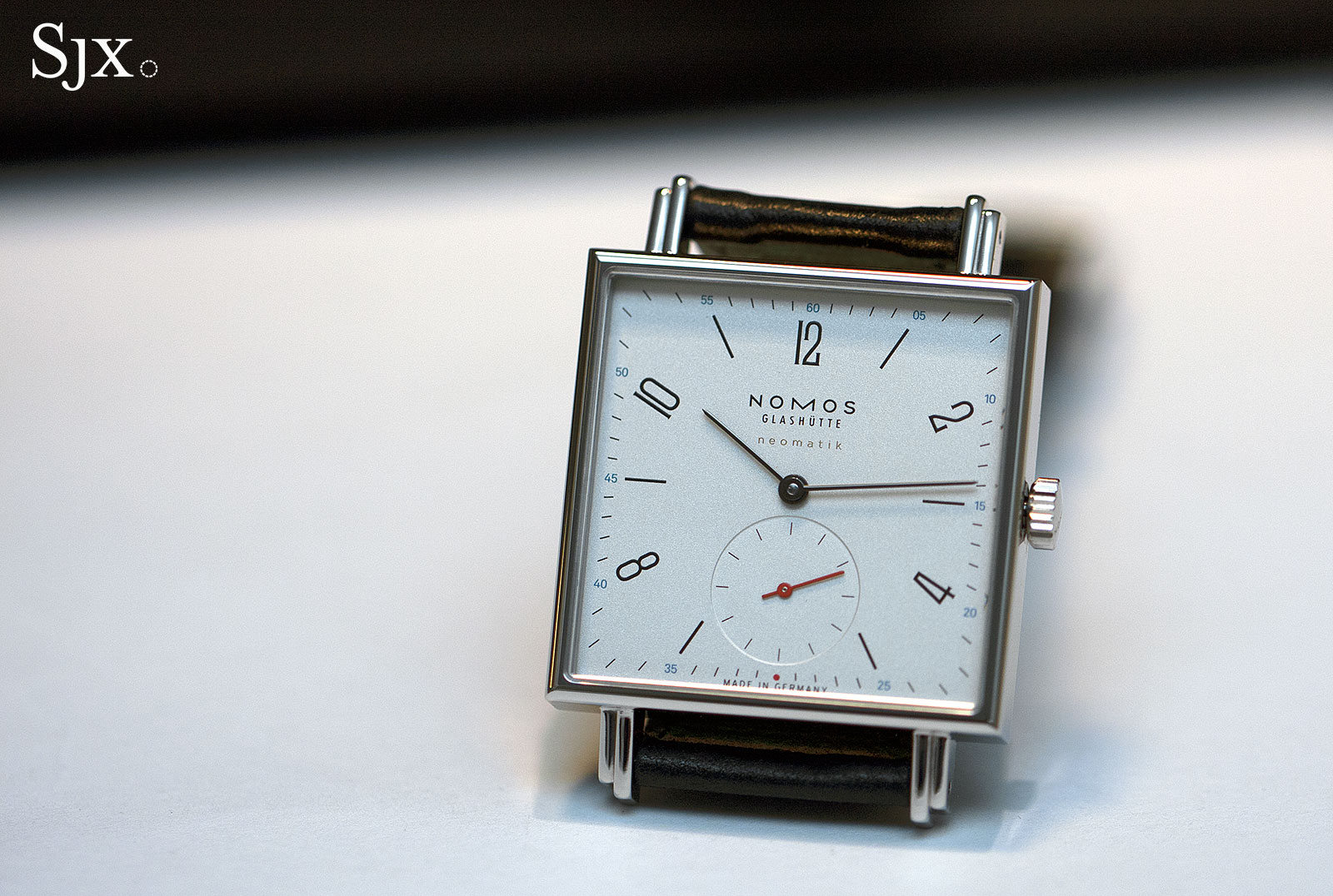 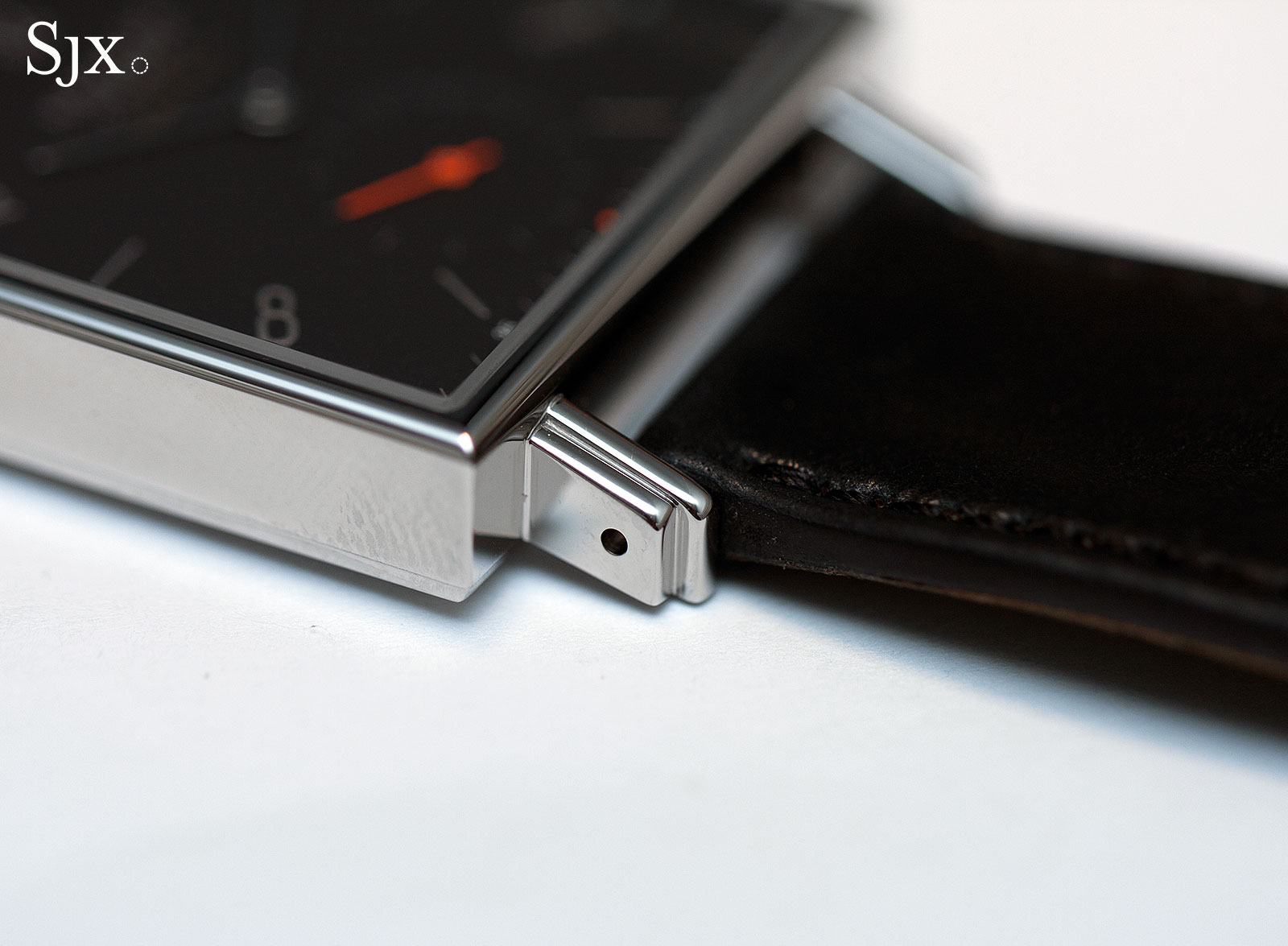 Slim at just 3.2 mm high, the DUW 3001 is the thinnest movement made by Nomos, a third slimmer than Nomos’ other automatic movement, the Peseux- 3001-based Epsilon. Developed from the ground up to be a thin but robust calibre, its height makes the DUW 3001 comparable to other extra-thin movements, like the 3.3 mm high Jaeger-LeCoultre calibre 899 in the Master Ultra Thin Date.

Despite being relatively simple, the DUW 3001 is attractively decorated, something Nomos excels at. The bridges and rotor are striped and finished with gilded engraving, while screws are blued. And the DUW 3001 in the Tetra is the first to feature the in-house DUW regulator for the balance, replacing the Trivois regulator that was purchased from movement maker ETA (though both function identically so there’s no tangible different). 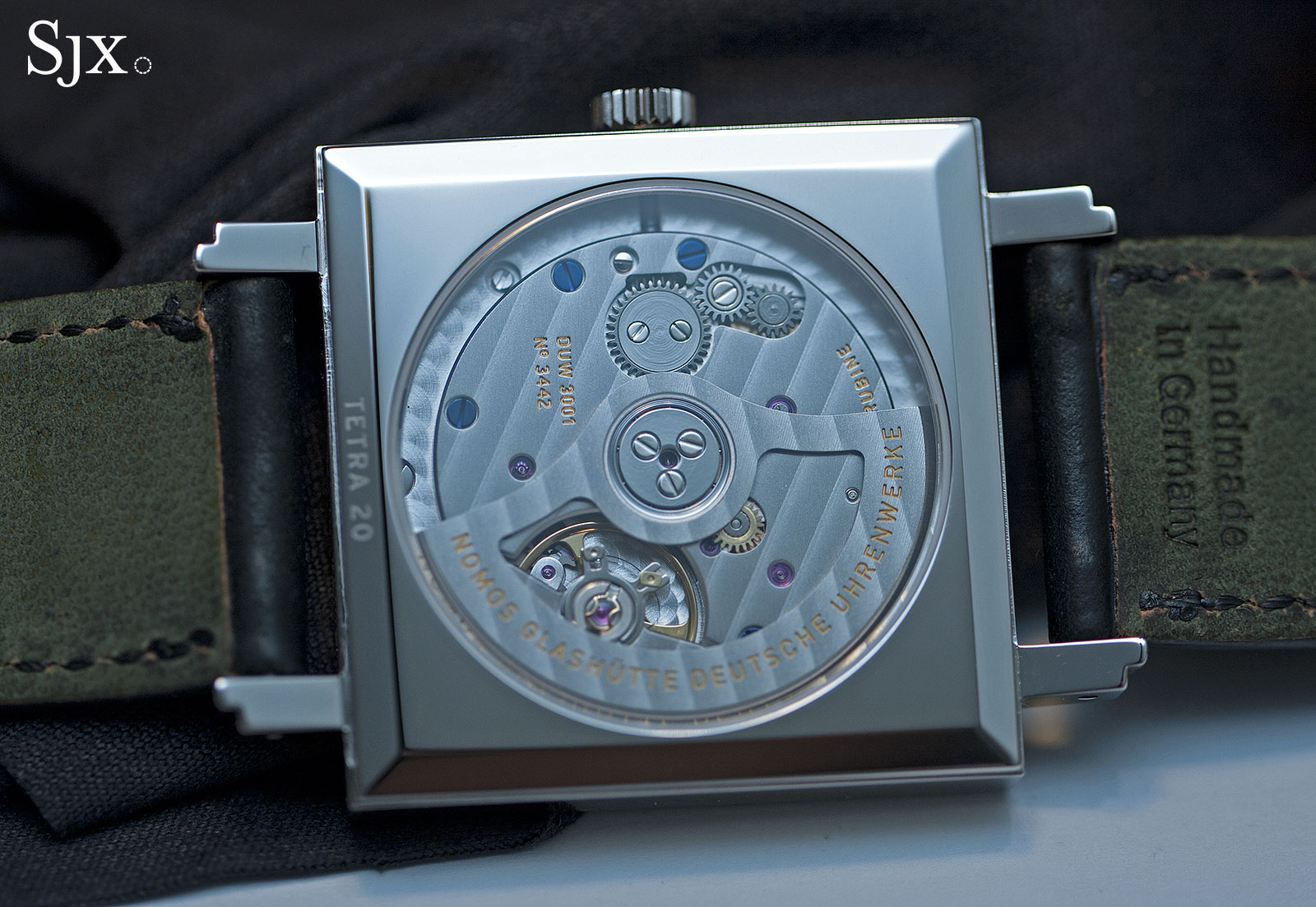 A dash of colour

Two dial colours are available: tiefblau, dark blue that looks charcoal, and a more predictable silver. The dial is laid out with typical Nomos style, for which the brand credits Deutscher Werkbund, rather than Bauhaus as commonly assumed. The look is clean, recognisable and appealing. While the look is identifiably Nomos, minor but brightly coloured accents on the dial – characteristic of the neomatik watches – give the it a more recent look than the traditional monochromatic Nomos palette. And while the limited run neomatik 1st editions have “neomatik” in red or orange, the regular production models have the word in gold. 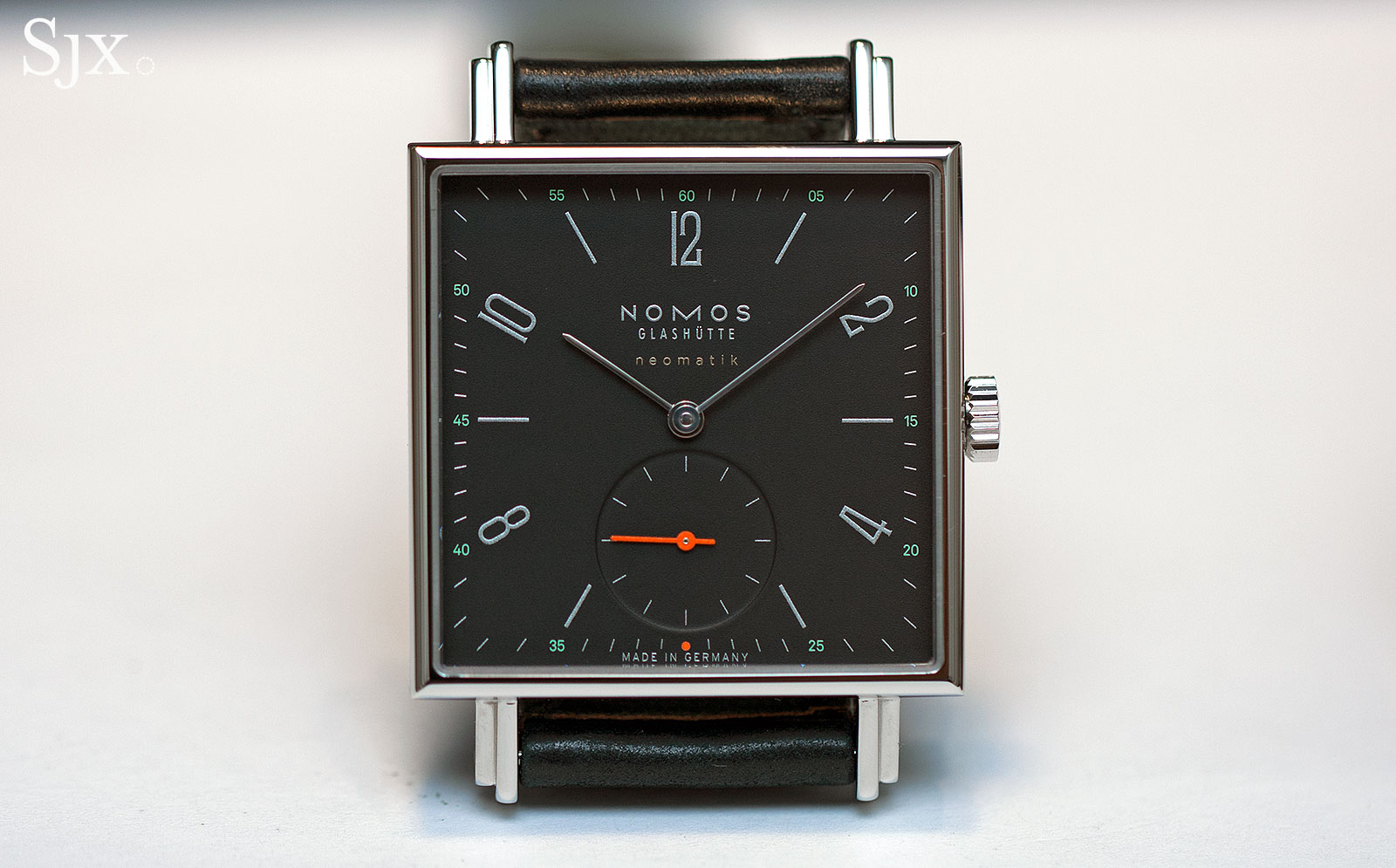 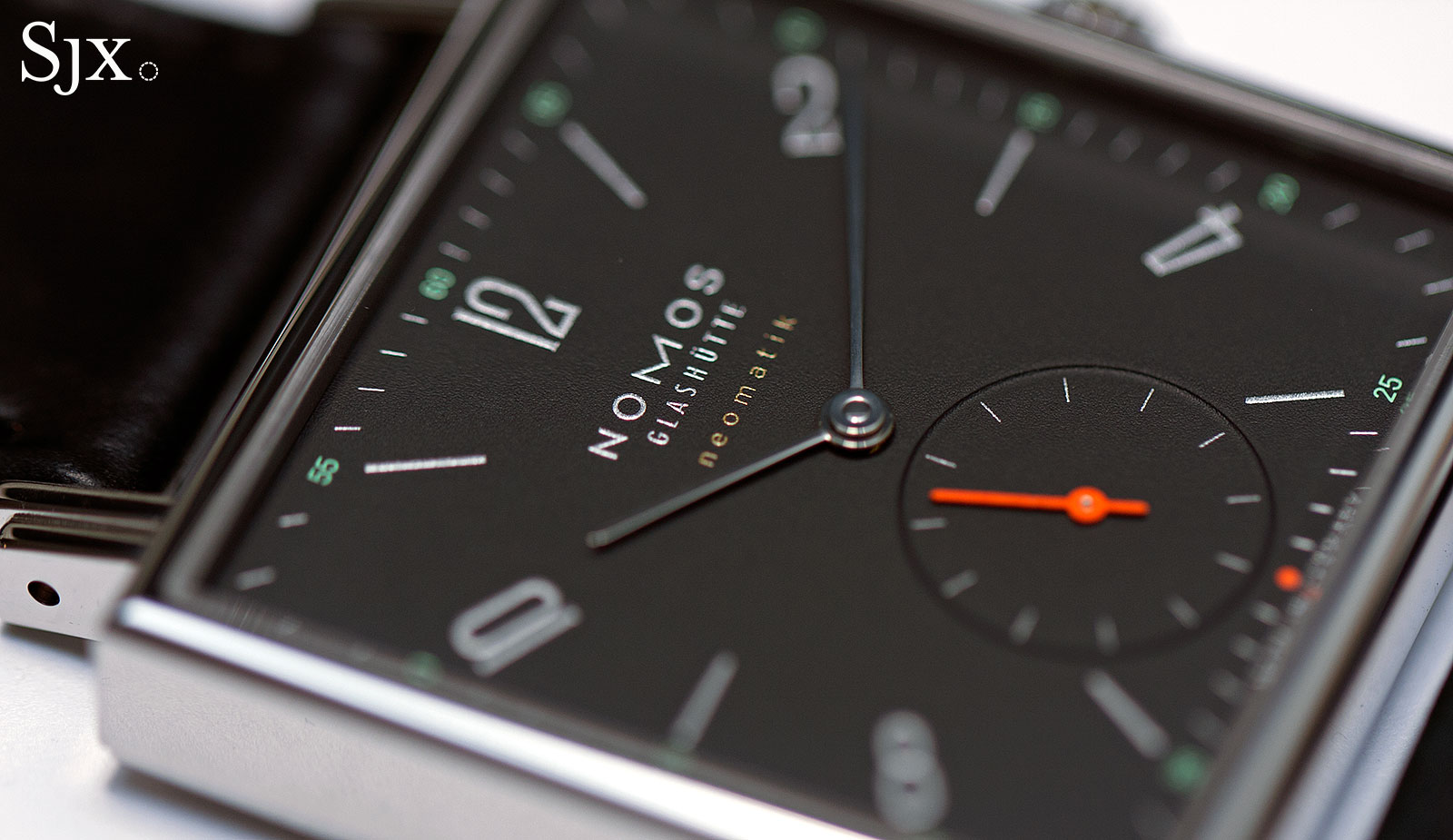 Like all Nomos watches, the Tetra neomatik is reasonably and accessibly priced, though significantly more expensive than the smaller, basic hand-wound model that costs half as much. The premium is justified given how much better the new movement is, and also the more wearable size of the larger model. Available starting the third quarter of 2016, the Tetra neomatik in silver costs €2900, US$3860 or S$4920, while the tiefblau Tetra is €2980, US$3980 or S$5060. Prices include local taxes.