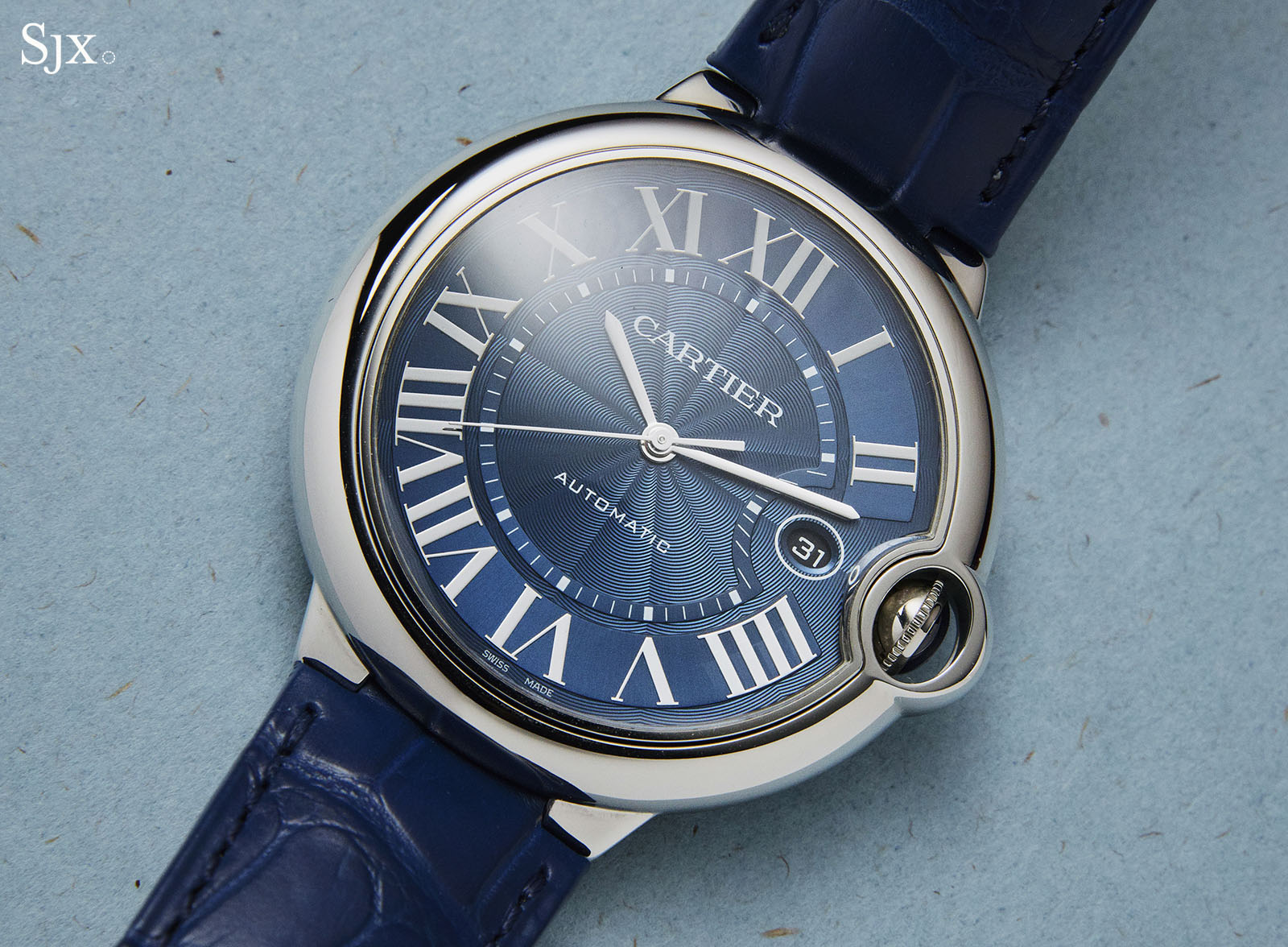 A brand is lucky if it has one bestselling form watch – meaning a watch case that isn’t round – but Cartier’s mastery of the shaped watch has spawned numerous iconic designs, from the Santos to Tank to Crash to Tortue.

Ironically, those designs were so successful, and enjoyed such incredible longevity, that Cartier’s round watches (like the Ronde or Diabolo) historically took a back seat. So when the brand decided to try its hand at a round watch once again, back in 2007, the case was no ordinary circle.

While it had a familiar and an apparently simple circular shape, the Ballon Bleu de Cartier had a distinctive compound curve profile, leaving it looking like a perfectly rounded pebble composed of numerous curves on several planes. Its smooth tactility in the hand – and versatility on the wrist as a casual or formal watch – made it the most popular Cartier wristwatch of the last decade. At its peak the Ballon Bleu model accounted for roughly a quarter of Cartier’s watch sales, according to a senior executive at the Parisian jeweller. The Ballon Bleu got its name from the blue synthetic spinel set into the winding crown, which appears to be floating within the round crown guard. It’s worth pointing out that the blue cabochon on the crown was not a new idea; these were already a Cartier signature on its earliest wristwatches, and even some pocket watches, albeit in natural blue sapphire.

Since its introduction, the Ballon Bleu has embraced new complications, sizes, materials and decorative techniques, priced from affordable to stratospheric, all while retaining the signature case style. This year, amidst the massive revamp of the Santos, the brand has quietly launched a new, entry-level Ballon Bleu in stainless steel with a deep blue dial. The new Ballon Bleu democratises a colour hitherto available only on far pricier models, like the Ballon Bleu Extra-Flat in platinum or the Ballon Bleu Flying Tourbillon, and never before an entry-level steel model, which retails for slightly over US$6000. While the watch is entry-level, the dial retains all the classic Cartier elements – guilloche, sword-shaped hands and printed Roman numerals (though the dial lacks the “secret signature”). The white print and numbers stand in striking contrast to the blue surface, which has a stamped flinqué guilloche, a finish typical of Cartier that’s made up of radiating scallops. The hour numbers and minute track sit on raised chapter rings that have a radial brushed finish, which makes the dial fairly elaborate for a watch of this price class. The case is identical to that of the other 42mm Ballon Bleu watches, a largish 42mm but easy on the wrist due to the short lugs. The front and side surfaces are identically finished with a simple mirrored polish, while the back is brushed; a sensible decision given that watches are usually placed on their backs and a matte finish hides scratches better. Its generously convex bezel and domed sapphire crystal form a seamless curve that is mirrored on the caseback. While ergonomic watch design usually calls for a slightly concave back to hug the wrist, the gently domed back of the Ballon Bleu sits well between the wrist bones, making it surprisingly comfortable. The fact that the watch is large but fairly lightweight adds to its wearability. The watch is powered by the cal. 1847 MC, which is Cartier’s entry-level in-house movement. It’s a functional movement that runs at 4Hz, with a 48-hour power reserve and simple aesthetic that’s artfully hidden behind the solid case back. Notably, the Ballon Bleu automatic with the in-house1847 MC costs only US$250, or S$300, over the same model with an ETA movement.