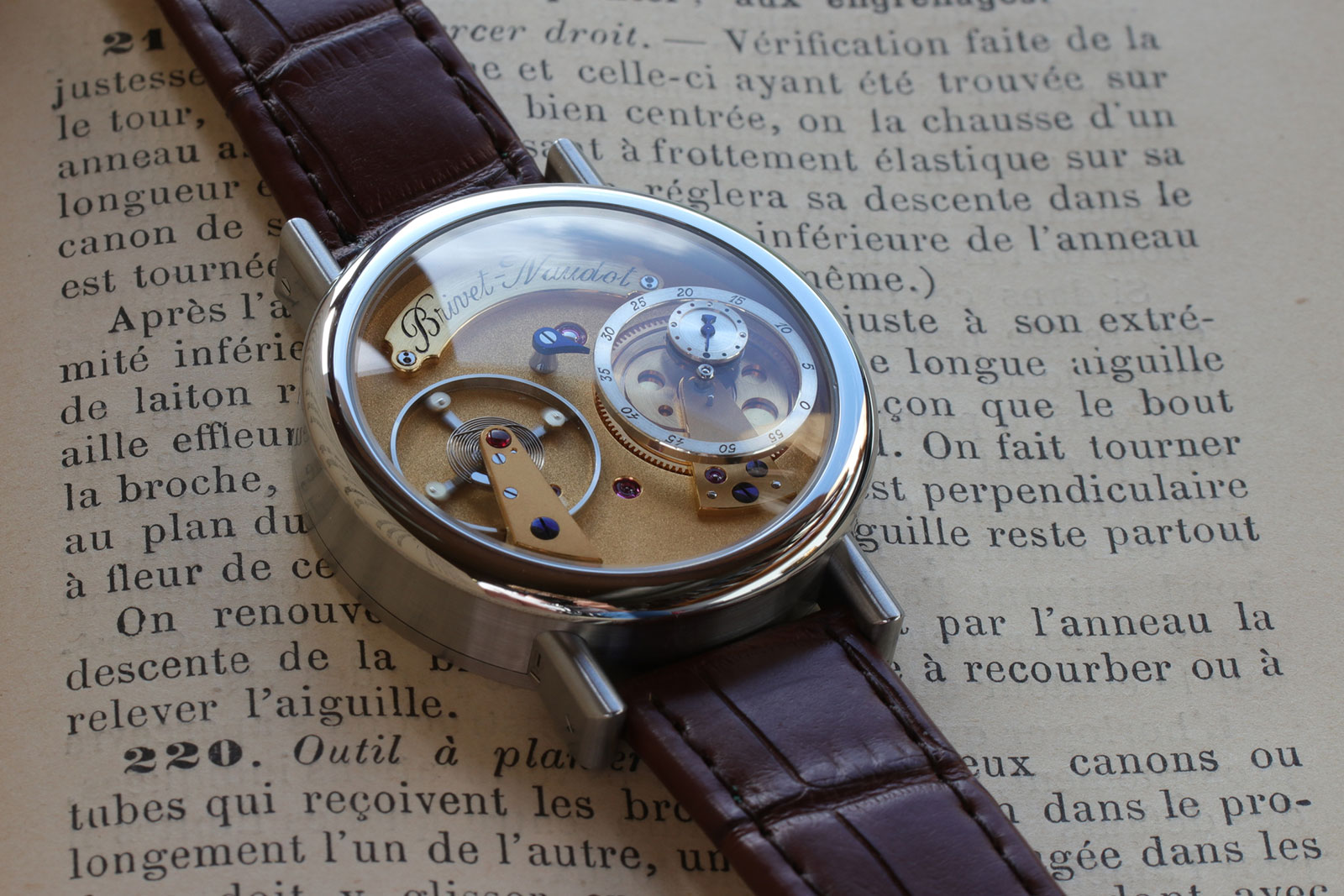 Now 27 years old, Cyril Brivet-Naudot has just completed his first wristwatch, which he produced almost entirely on his own, without the aid of electronic equipment. More intriguingly, the movement is equipped with a proprietary escapement conceived by Mr Brivet-Naudot and a fellow watchmaker.

Mr Brivet-Naudot created the watch over the last three years, alongside his full-time work doing restoration of vintage timepieces as well as fabricating components and prototypes for watch brands.

The wristwatch is inspired by 19th century timepieces, something that’s evident in both its form and function. The case is steel and 39mm in diameter, but the movement is heavily reminiscent of a pocket watch, starting with the fact that it is key-wound with a 40-hour power reserve; time-setting is also done via a key. But despite the classical leaning of the watch, it abounds with unusual and inventive ideas. It’s been constructed in an unusual manner, with the balance wheel and escapement split between the front and back. The adjustable mass, free-sprung balance that runs at 18,000bph sits on the dial, while the escapement is on the back. Inspired by an escapement attributed to 19th century Swiss watchmaker Louis Richard, Mr Brivet-Naudot named the escapement libre excentrique, or “free eccentric”. Intriguing in function, the escapement is reminiscent of spring detent escapement and the most notable technical feature of the watch. The pallet fork and spring Most of the watch, including the steel watch case, is produced by Mr Brivet-Naudot. Most of the work is accomplished with files and lathe; Mr Brivet-Naudot did not utilise computer-numerical control (CNC) milling machines. He buys the mainspring, hairspring, jewels and crystals from suppliers. Notice the ratchet wheel and click for the barrel

Because Mr Brivet-Naudot produced most of the components himself, he was able to incorporate the motif of large and small circles repeatedly throughout the watch, from the sub-dials on the front to the spokes of the wheels, and right down to the screw heads. Though he completed his education at the polytechnic in the Swiss city of Lausanne, Mr Brivet-Naudot first studied watchmaking at the local technical school in Morteau. It’s a small French town near the border with Switzerland that is not extraordinary in respect save one: a surprising number of talented young watchmakers graduating from its Lycée Polyvalent Edgar Faure.

The majority of winners at this year’s separate watchmaking awards awarded by both F.P. Journe and A. Lange & Söhne went to graduates of the school. According to Mr Journe, a crucial reason behind the school’s prolific output is an especially inspirational watchmaking teacher.

Mr Brivet-Naudot makes his watches to order, with a high degree of customisation possible. Prices start at about €60,000 and they are available direct from the watchmaker.