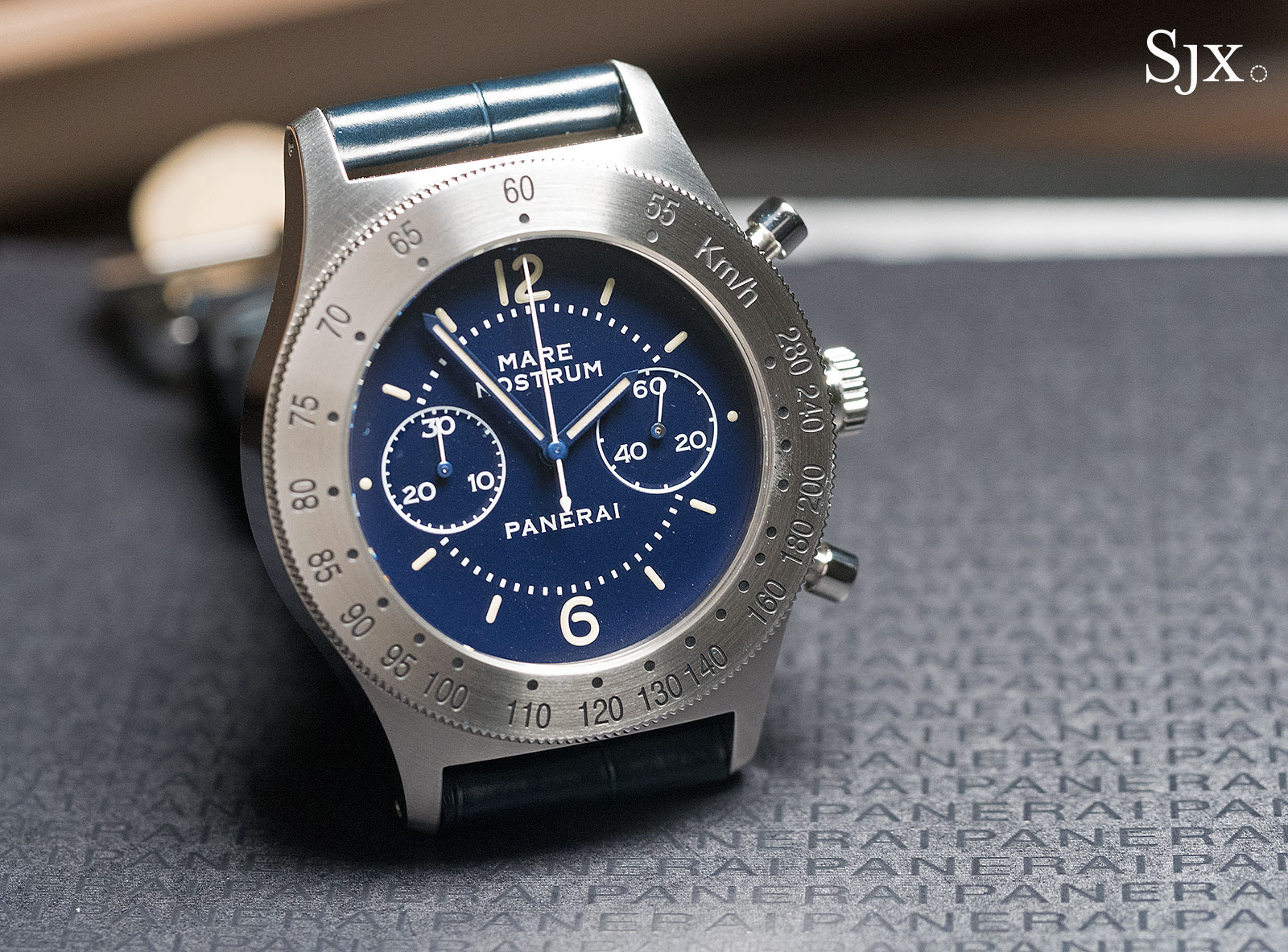 Few brands are as adept as resurrecting past designs as Panerai. The entire brand is defined by a pair of military dive watches that emerged during World War II. So it is not surprise that the latest from Panerai is a remake; in fact it is a remake of a remake.

The recently announced Mare Nostrum PAM00716 is a replica of the 1990s watch of the same name, which was itself a scaled down version of a prototype officer’s chronograph produced in the 1940s that was named after mare nostrum, Latin for “our sea”, the Roman Empire’s name for the Mediterranean. So while the Mare Nostrum scores low on creativity, it is in itself an appealing timepiece.

The new Mare Nostrum PAM 716 is almost a like-for-like remake of the “Pre-Vendôme” ref. 5218-301/A that was introduced in 1993 and produced until 1997 or so, in a production run of 990 watches including several dozen for Sylvester Stallone, according to fan-site Paneristi. Introduced before Richemont acquired Panerai in 1997 – the Swiss luxury group was known as Vendôme back then – the ref. 5218-301/A was notable for being the first Panerai without a black dial. Based on the oversized, 52mm Mare Nostrum prototypes of 1943, the ref. 5218-301/A had a 42mm steel case and a basic modular movement. It was a handsome, fuss-free watch – which is exactly what the new Mare Nostrum is. The steel case is 42mm with a circular brushed top and polished sides. Though it feels smallish compared to the typical Panerai, which now averages 47mm, the Mare Nostrum is a sizeable. Both the bezel and the straight ends of the case where it meets the lugs gives it a bigger footprint than comparably sized watches. Necessarily it is almost identical to the 1993 original, a good thing since the remake retains the uncomplicated feel of the original. Differences between this and the original are minuscule, but they included the added lettering on crown and the depth of the screw bars for the lugs (the screw heads appear deeper on the originals). A dark blue with a fine grained surface, the dial is appealingly functional. Like the original it has slightly recessed sub-dials, and appears identical at first glance, though minor differences reveal themselves up close. Those include the serif font currently used, as well as the the thinner rings on the chronograph sub-dials. Notably, the new Mare Nostrum is a remake of how the 1990s watch looks today, and not how it appeared when it was first launched. That explains the ivory-tone Super-Luminova on the dial and hands, which approximates the tritium paint on the originals that has darkened over time. Panerai also stuck to the same movement as found in the original, which is a basic and economical ETA 2801 topped by a Dubois-Depraz chronograph module. Christened the cal. OP XXXIII, it is hand-wound with a 42-hour power reserve. While it may be concealed underneath the solid back, the ETA 2801 is not much to behold. What the movement lacks in beauty it makes up for in reliability and cost. Priced at just over US$10,000, the Mare Nostrum PAM 716 is well-priced for a Panerai chronograph and roughly on par with the competition, like the entry-level Jaeger-LeCoultre Master Chronograph for instance (which admittedly has a finer movement).

Notably, the new Mare Nostrum is priced at slightly less than what the originals of the 1990s cost today, which is US$13,000 to US$15,000. Notably, that’s not far from what they went for during the mid-2000s Panerai craze because the Mare Nostrum was always something of a sleeper. Collected less fanatically than the signature Luminor, the Mare Nostrum was often a Panerai for those in the know.

The uncanny irony lies in the fact that the Panerai craze was deflated in large part by Panerai itself reusing its own ideas once too often, which is exactly what the new Mare Nostrum is. But that does not detract from it being an appealing, well conceived watch.