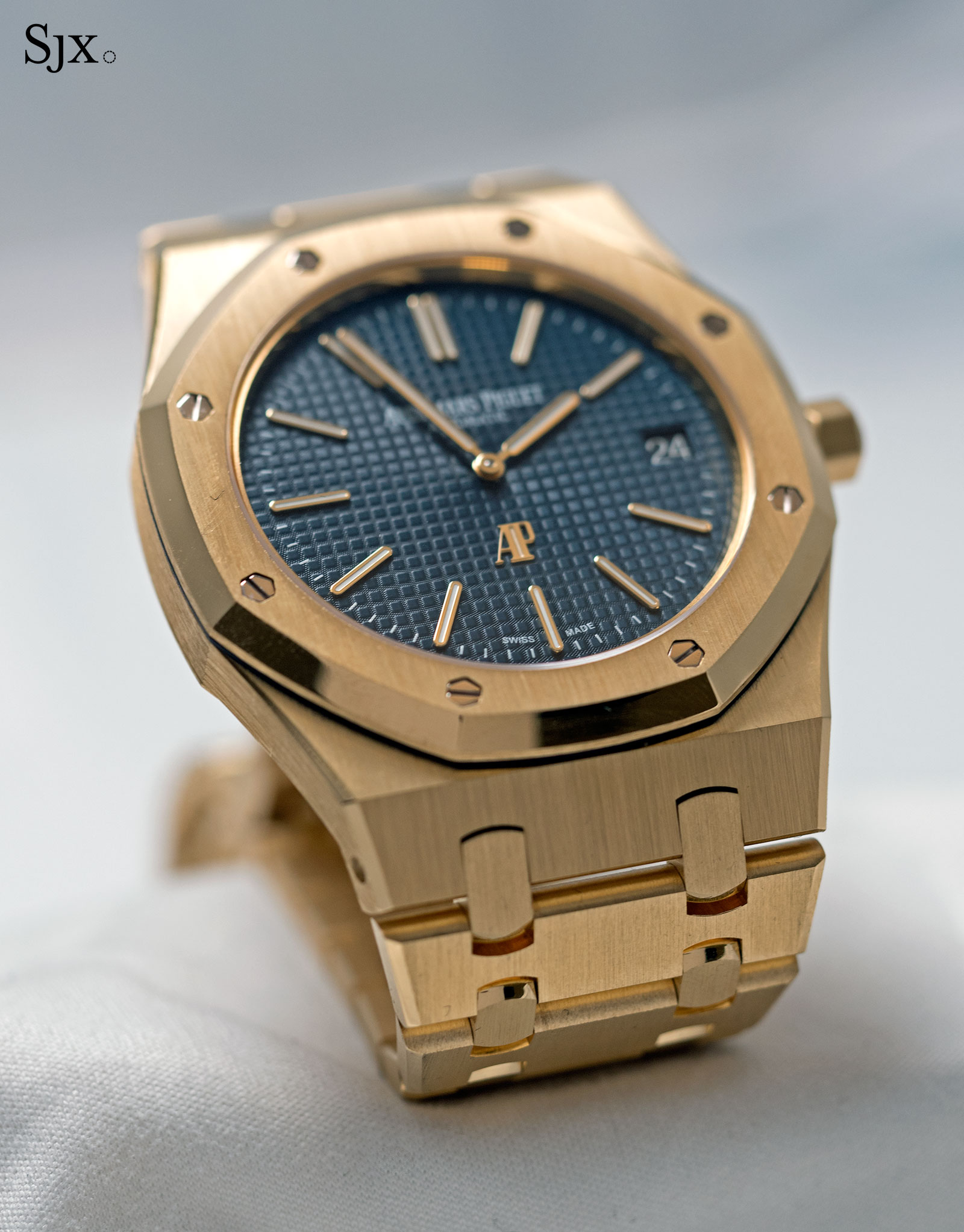 First introduced as a 50-piece, green dial limited edition for Singapore retailer The Hour Glass, the Audemars Piguet Royal Oak Extra-Thin in yellow gold was added to the regular line-up at SIHH 2017. And it is as good looking and expensive as it ever was.

A modern remake of the original Royal Oak “Jumbo” ref. 5402 of 1972, the Royal Oak Extra-Thin is a classic in steel and impressive in gold. It was originally available only in pink gold, which made it loud, but the yellow gold rendition comes across as slightly more classic. Yellow gold is after all one of the metals the Royal Oak was available in, back in the 1970s. Available in either the classic dark blue or a newly introduced yellow gold finish, the Royal Oak Extra-Thin in yellow gold is physically identical to its siblings in steel and pink gold. The case is 39mm wide, thin at 8.1mm high. It cuts an elegant profile on the wrist, and is weighty despite being slim. Because the case is essentially an agglomeration of flat surfaces, it feels somewhat angular on the wrist unlike its only peer, the Patek Philippe Nautilus, which is comprised more rounded shapes.

Yellow gold is not common in high-end men’s watches, especially from haute horlogerie names, but it’s an appeal look for someone who leans towards a lavish, slightly vintage feel. But like all other gold alloys, yellow gold is soft (marginally softer than white gold in fact), leaving the lovingly finished surfaces of the watch vulnerable to marring. There is perhaps no other watch that looks as good as the Royal Oak when factory fresh and pristine – the alternating polished and brushed surfaces on the case are gorgeous. Both the blue and gilded dials have the same quintessential chequerboard tapisserie guilloche that’s a trademark of the Royal Oak. Done by hand on a rose engine – creating the telltale motif below the chequerboard – the dials are brass but fitted with solid gold hands and hour markers. Both colours are equally handsome, but the yellow gold finish has an edge in that it’s a less common colour that’s unashamedly loud while maintaining a modicum of style. Mechanically the Royal Oak Extra-Thin is almost identical to the 1972 original, with the same calibre 2121 that was originally developed by Jaeger-LeCoultre as the calibre 920. A sophisticated and slim movement that’s withstood the test of time, the calibre 2121 has been slightly upgraded over the years, improving its robustness and reliability, but still lacks a quickset date – probably the singular weakness of the Royal Oak Extra-Thin.

Notably Audemars Piguet now owns the intellectual property for the calibre 2121 and produces the movement in-house. Because its slimness makes the 2121 more challenging than a run of the mill calibre, the movement is produced at Renaud & Papi, the complications specialist owned by Audemars Piguet better known for the tourbillon movements it produces for Richard Mille. Like the calibre 2121 found in other Audemars Piguet watches, the movement inside the Extra-Thin can be customised with a personalised rotor that can be open-worked to form a variety of motifs.