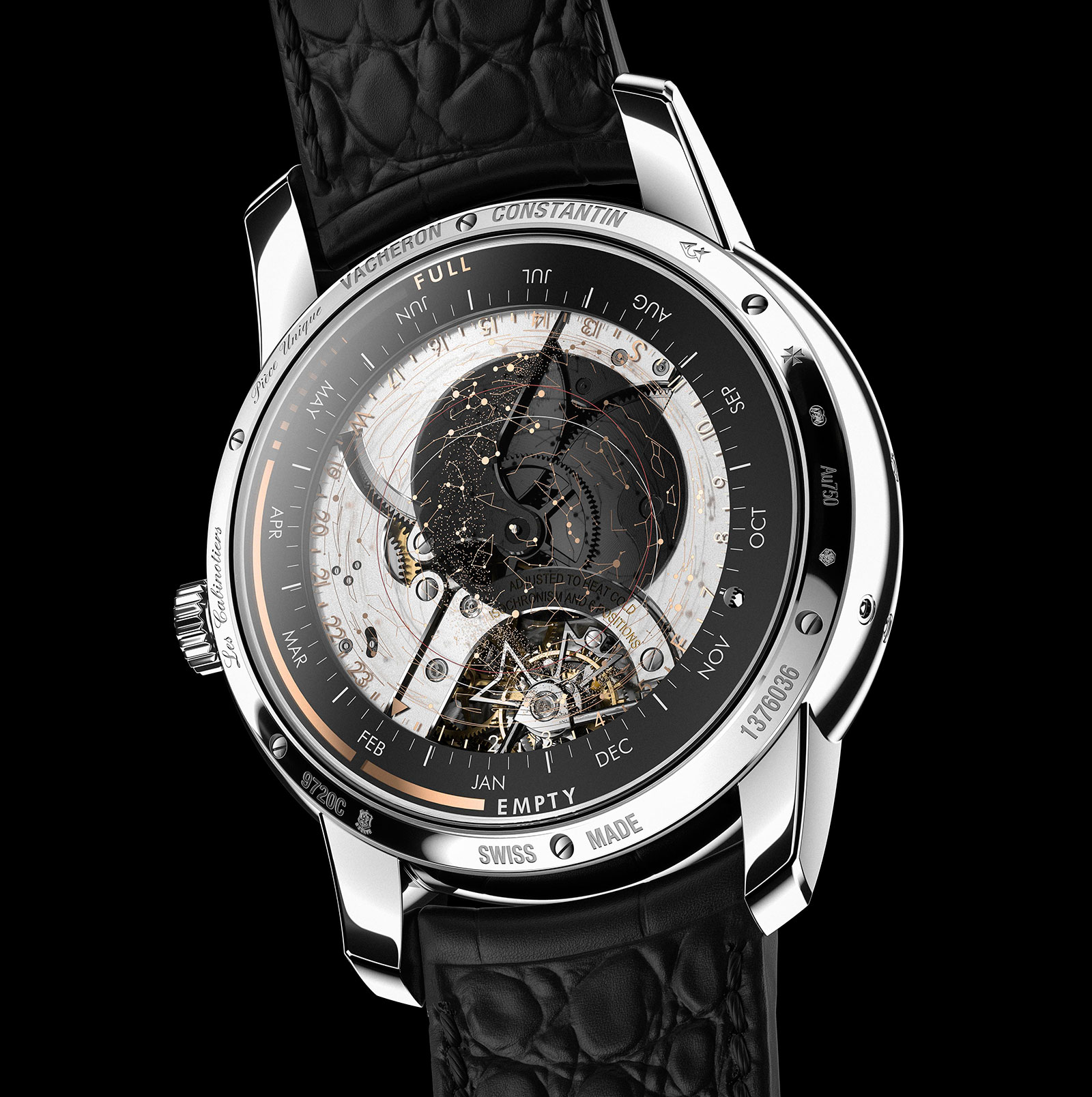 Vacheron Constantin hits the ground running on the very first day of SIHH 2017, taking the covers off one of the most complicated watches of the fair. The Les Cabinotiers Celestia Astronomical Grand Complication 3600 boasts 23 astronomical complications – ranging from a sky chart to the tide levels – packed into a two-sided, 45mm watch case. And it also has six barrels for a three week, or 504-hour, power reserve.

Conceived by Vacheron Constantin’s elite watchmakers in Les Cabinotiers, the department dedicated to custom timepieces, the Celestia was five years in the making. It follows in the footsteps of other one of a kind creations from the department – les cabinotiers is a 19th century term referring to a watchmaking workshop in Geneva – like the Double Axis Armillary Tourbillon and the Ref. 57260, the most complicated timepiece ever. The Celestia is powered by the calibre 3600, a 514-part movement that’s a modest 8.7mm high, though it’s a very large 36mm in diameter. It has 23 astronomical complications, most of which were already found on the Ref. 57260 grand complication pocket watch.

The complications start with three types of time – civil, solar and sidereal. The first two are shown on the front of the watch, and the last on the rear.

Each time indication is distinct and powered by its own gear train. Civil time is shown by the white gold Breguet-style hands on the front, being the usual time based on 24-hours shown on ordinary watches. A pink gold hand with a sun-shaped tip indicated solar time, also known as the equation of time, which is based on the motion of the Sun. This can range from -16 to +14 minutes throughout the year, because the Earth’s orbit around the Sun is elliptical. Notably, this is a running equation of time, showing solar time in real time, rather than being the more commonly found indicator that displays the deviation between solar and civil time. Besides the time displays, there are a dozen more complications on the front. They include a perpetual calendar, a mareoscope that shows the tide levels in the aperture at 11 o’clock, sunrise and sunset times located at five and seven o’clock, and an indicator for the zodiac signs, seasons, solstices and equinoxes at four o’clock. Over on the rear, the display centres on two sapphire discs. The key feature is the star chart that shows the night sky when seen from the Northern Hemisphere. The outer edge of the back display shows the months of the year as well as a power reserve indicator (that goes from “Full” to “Empty”). And the discs also indicate sidereal time – based on the Earth’s rotation relative to the stars. The calibre 3600 is hand-wound, with half a dozen barrels, arranged in threes, for a 21 day power reserve. Partially visible through the back, the movement has a frosted rhodium-plated finish, as well as clear instead of the usual red rubies, to maximise legibility of the display on the rear.