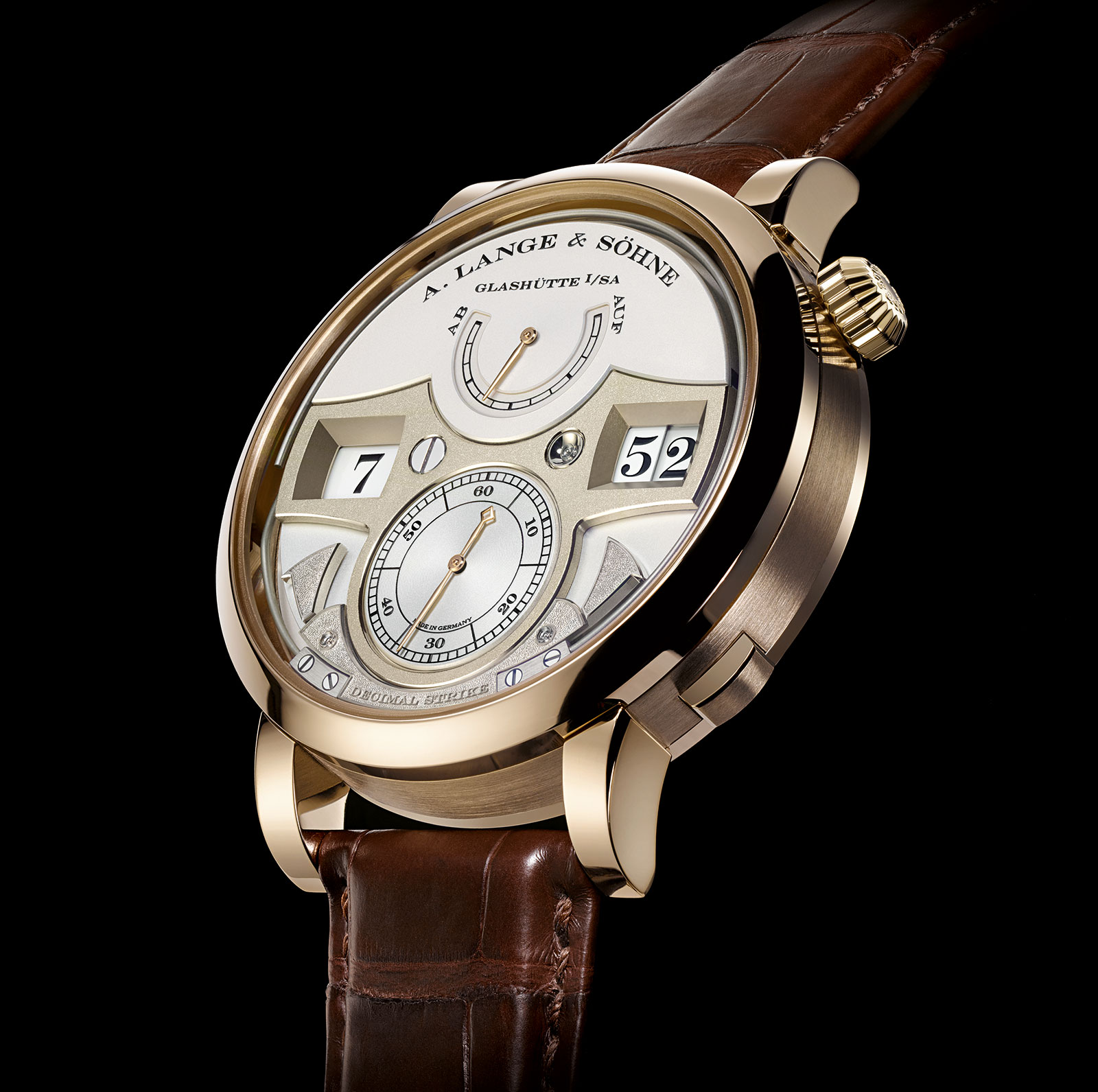 The opening day of SIHH 2017 saw A. Lange & Söhne take the covers off a varied offering of watches, ranging from the top of the line Tourbograph Perpetual “Pour le Mérite”, one of the most complicated watches ever introduced by the German watchmaker, to the crisply functional 1815 Annual Calendar. Here’s a rundown of the rest of the new launches, including prices in Euros (that include 19% German tax).

The other significant complication of the year is the Zeitwerk Decimal Strike. Like the new Tourbograph, the Decimal Strike is derived from existing Zeitwerk models, with a bit of Handwerkskunst decor thrown in. Visible at six o’clock on the dial, the hammers and striking bridge are finished with tremblage, a finely grained surface engraving that Lange previously used only on its Handwerkskunst limited editions. With a case in honey gold, the frequently encountered pinkish-yellow gold alloy exclusive to Lange (for now), the Decimal Strike is 44.2mm in diameter. The hand-wound L043.7 movement has a 36 hours power reserve.

Next up is the monumental Lange 31, now in white gold with a grey dial in a 100-piece limited edition. Previously it was available in platinum and pink gold, both as part of the regular collection.

While the grey dial is a new addition, it has been in the works for several years. Your correspondent once spotted the former chief executive of Lange, Fabian Krone, wearing a prototype in the same livery. Offering a remarkable 31 day power reserve thanks to two mainsprings each almost 2m long, the Lange 31 is 45.9mm in diameter and almost half a pound. Its size, weight and price made meant the Lange 31 only sold really modestly, so perhaps this limited edition is its swan song. The Little Lange 1 Moon Phase (ref. 182.030) has only a moon display, without the day and night indicator of the men’s model. But the ladies’ version makes up for that with a silver-plated, solid gold dial decorated with fine guilloche – a feature that was historically only found on limited edition models like the Lange 1 20th Anniversary. Available only in pink gold, the case is 36.8mm in diameter. It’s priced at €38,500 and will be available starting summer 2017.

Saxonia with mother of pearl dial

The ladies Saxonia features a mother of pearl dial and a 35mm case. Available in white or pink gold, it has inside the L941.1 movement. That’s one of the earliest movements developed by Lange and now predominantly used in more affordably priced models, like the Saxonia 37mm for men. This is hand-wound with a 45-hour power reserve and a price of €16,500, with deliveries starting summer 2017. A. Lange & Söhne just introduced seven new models at SIHH 2016, including the flagship Datograph Perpetual Tourbillon. Here's an overview of all seven, including specs and prices.