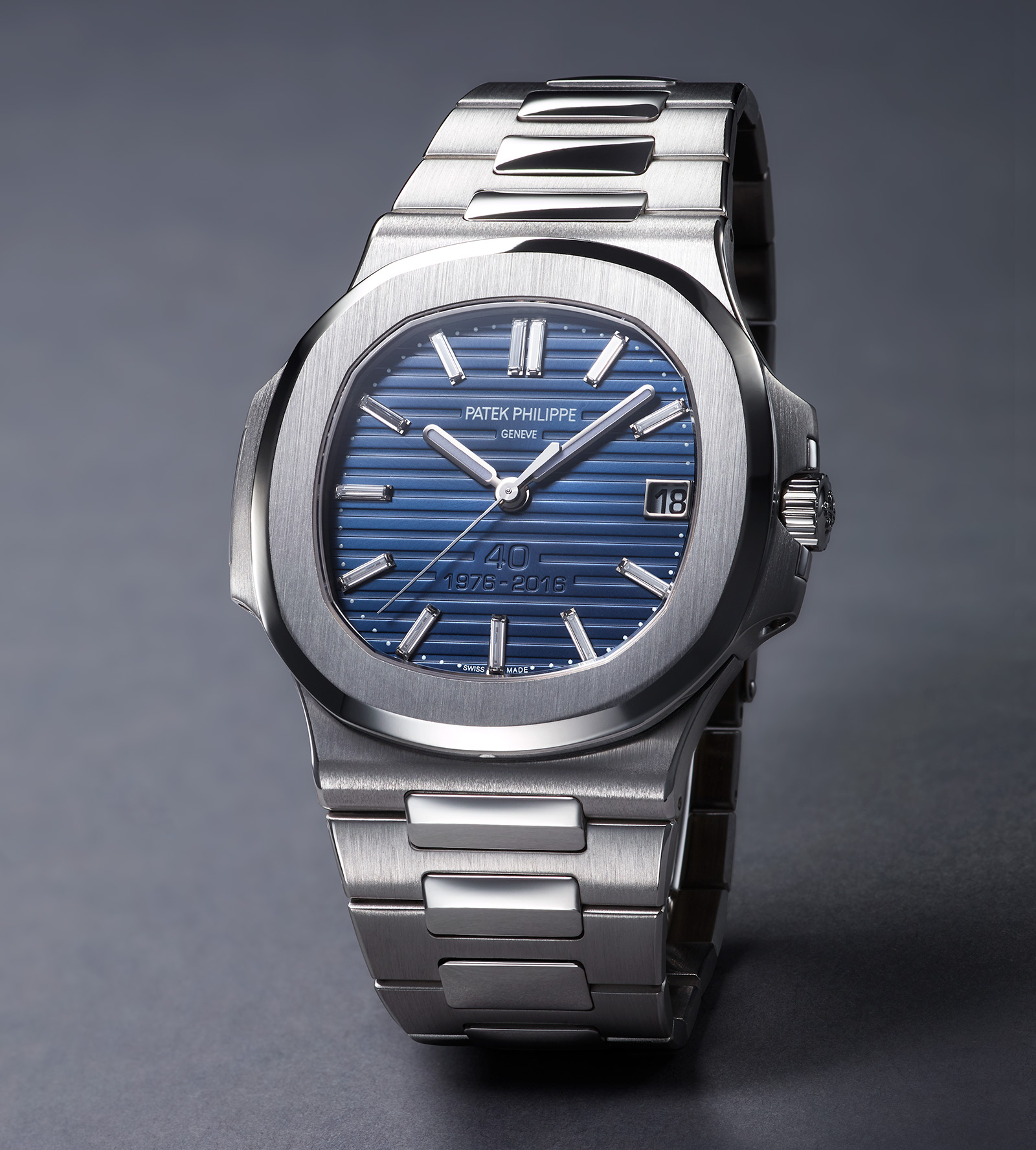 An iconic luxury sports watch by any measure, the Nautilus is 40 years old this year. Famously designed by Gerald Genta on a napkin, the Nautilus first came to market in 1976 as the “Jumbo” ref. 3700/1A. For the occasion Patek Philippe has created a pair of Nautilus wristwatches in precious metal that stick closely to the original style, but with some tweaks. These adaptations, including an enlarged case for the chronograph and prominent commemorative lettering on the dial, may prove controversial with traditionalists. Here’s a quick rundown on the anniversary editions, including specs and prices.

Size-wise it is identical to the ordinary ref. 5711 Nautilus: sans crown, from one corner of the bezel to another, the watch is 40mm in diameter. Like all other platinum Patek Philippe watches, the ref. 5711/1P has a small diamond set into the bezel at six o’clock. A disc of solid 18k yellow gold, the dial is finished in dark blue with a striped, horizontal stamped guilloche that’s typical of the Nautilus. The baton hour markers are also 18k gold and set with baguette-cut diamonds; the total weight of all 12 diamonds is about 0.34 carats. At six o’clock two lines of embossed text announce the occasion with “40” followed by “1976-2016” below. The ref. 5711/1P is powered by the automatic calibre 324 SC that’s equipped with an adjustable mass Gyromax balance wheel and silicon Spiromax hairspring. Regulated to -3 to +2 seconds a day, the movement exceeds the usual COSC chronometer standards.

The second commemorative model is the Nautilus Chronograph Ref. 5976/1G 40th Anniversary Limited Edition, a chronograph in white gold that’s the largest serially produced Patek Philippe wristwatch ever made, likely Patek Philippe’s response to the popularity of large sports watches from the likes of Richard Mille and Audemars Piguet. Measuring 49.25mm in diameter including the crown, or 44mm from corner to corner of the bezel, the ref. 5976/1G is essentially an enlarged version of the original Nautilus chronograph ref. 5980. The ref. 5980 and its successor, the Nautilus Travel Time ref. 5990, are both only 40.5mm from one corner of the bezel to the other. To accompany the larger case, the chronograph register at six o’clock has been proportionately enlarged, making the three elapsed time tracks easier to read. The outermost track counts the hours, then the minutes in the inner two tracks. The Nautilus chronograph in white gold has a dial made of brass and coated dark blue, and finished with the model’s trademark horizontal stamping.

The hour marks and hands are 18k gold, while each hour index is set with baguette- or princess-cut diamonds totalling 0.29 carats. Just under the 12 o’clock marker is a single line of anniversary text reading “1976 – 40 – 2016”. Inside is the calibre CH 28-520 C, a self-winding chronograph movement with a vertical clutch and column wheel, as well as a silicon Spiromax hairspring, regulated to -3 and +2 seconds a day.

Both the ref. 5711/1P and ref. 5976/1G are delivered in a special anniversary box made of natural cork with steel frames, the same material used for the box on the 1976 original. The historical reference continues with the steel plaque set on the front of each box, being a replica of the plaque on the original Nautilus box. Hands-On with the Patek Philippe Nautilus Ref. 5711/1P in Platinum

One of the rarest contemporary Patek Philippe watches, the Nautilus ref. 5711/1P is entirely in platinum, with only a handful sold each year. We go hands-on with one of these rare beasts.