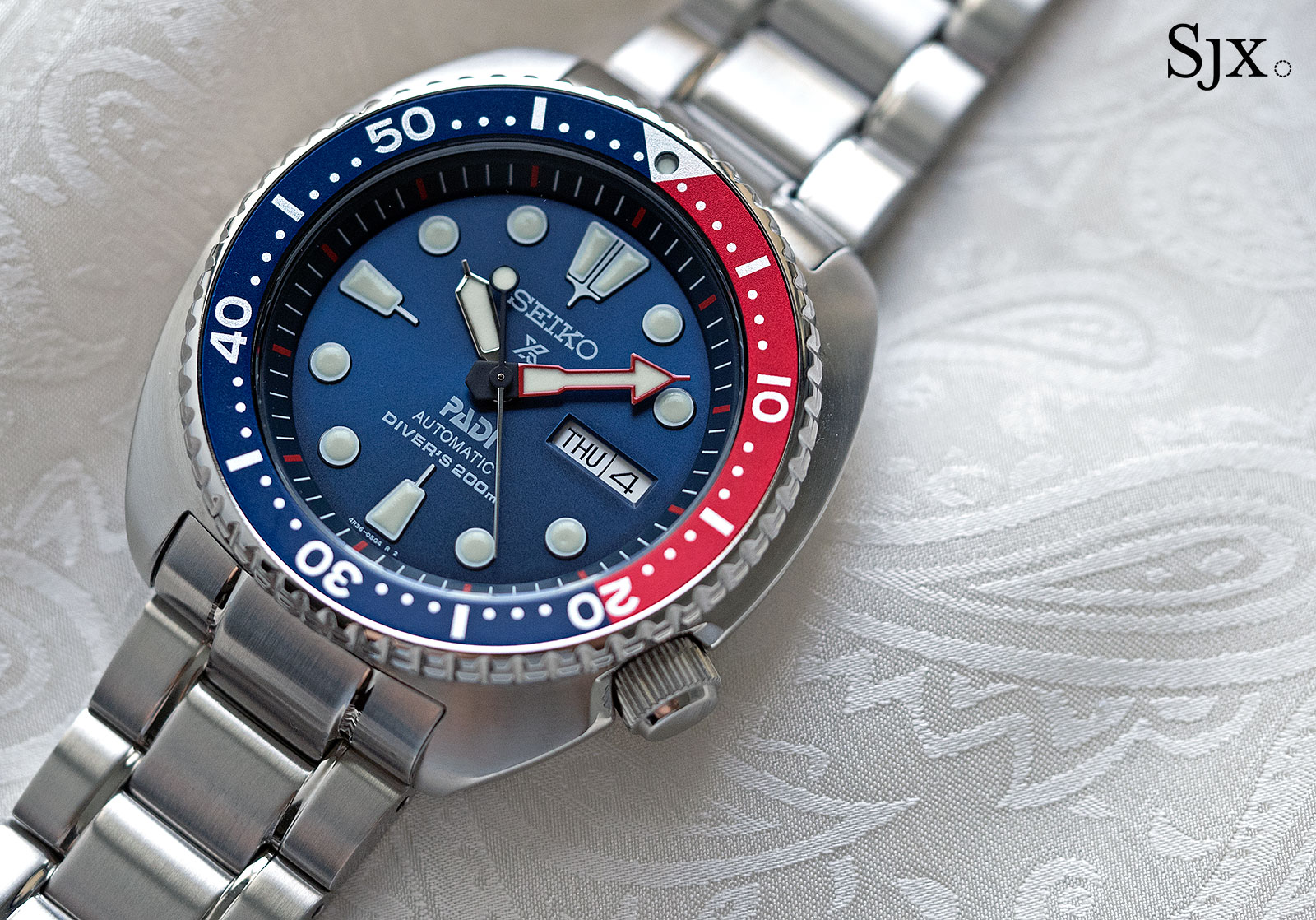 Last year, in a rare instance of a real world test of a dive watch, Seiko strapped four of its Marinemaster “Tuna” dive watches to the outside of a submersible operated by Japan’s national marine research agency, which then plunged into the Pacific Ocean. The Marinemaster 1000m automatic kept good time until it reached 4299m, or 2.67 miles, beneath the surface, proving Seiko’s expertise in dive watches.

Seiko recently agreed to support PADI’s efforts to promote diving and marine conservation, creating a pair of special edition dive watches to mark the partnership. Both are clad in PADI’s blue and red livery, but the one that got everyone all excited is the Automatic Diver’s ref. SRPA21-K1, the best looking “Turtle” remake yet. The modern Turtle is actually a remake that’s modelled on the Seiko 6309 (and 6306 for the Japanese market) divers of the mid 1970s to late 1980s, characterised by an ovoid case shaped like a turtle’s shell. Though faithfully shaped like the original, the Turtle remake is larger at 45mm in diameter (versus 44mm on the original). Despite its large size, the Turtle wears like a smaller watch because of its short lugs.

While the Turtle reissue is ordinarily available in a range of muted, arguably boring colours, including the classic black model (SRP777K1), the PADI edition is vibrant. Unlike most Seiko dive watches that have a flat or semi-glossy dial finish, the PADI turtle has a sun ray-brushed, metallic blue dial that varies in colour as it catches the light.

Red accents are smartly distributed around the dial: namely the five-minute hashmarks and minute hand. Together with the metallic finish they give the watch a lively feel. The dial, however, is crowded with five lines of lettering. The designers shoehorned the PADI logo onto the dial, displacing the X-shaped Prospex logo to 12 o’clock. Fortunately, the hands are relatively broad, so much of the time the logos are concealed.

While there is too much of it, the printing on the dial is neat and crisp, even up close. The serif font of “Seiko” is particularly sharp, surprisingly given the price of the watch, which means the dial cost very little to make. The movement calibre printed at six o’clock, as is customary for Seiko watches.

The large and heavy case has a reassuring solidity. While the brushed and polished surfaces are neatly done, the edges between the two are soft, lacking the precise definition found on the cases of higher-end Seiko dive watches. Similarly, the bracelet is chunky and hefty, but simply constructed. The clasp is stamped metal while the links are held together with friction fit pins and tubes. Nonetheless it does the job well, and feels good on the wrist. Inside is the calibre 4R36, the workhorse automatic found in many of Seiko’s mid-range automatic watches. It can be manually wound and features hack seconds. While extremely robust, the 4R36 has a relatively short 41-hour power reserve, which means the watch will stop if left unworn for two days. But these are minor niggles for a watch that is priced at just US$525. It’s an exceptionally good buy, especially since the PADI edition only slightly more expensive compared to the ordinary Turtle that retails for US$495.

Already available in stores, the PADI diver is a special, rather than limited, edition, meaning it will be made for a limited period of time, but there certainly will be no shortage.

To mark its newly minted partnership with PADI, Seiko has unveiled a pair of special edition dive watches, a Kinetic GMT Diver and Prospex Automatic Dive "Pepsi". Specs and pricing below.