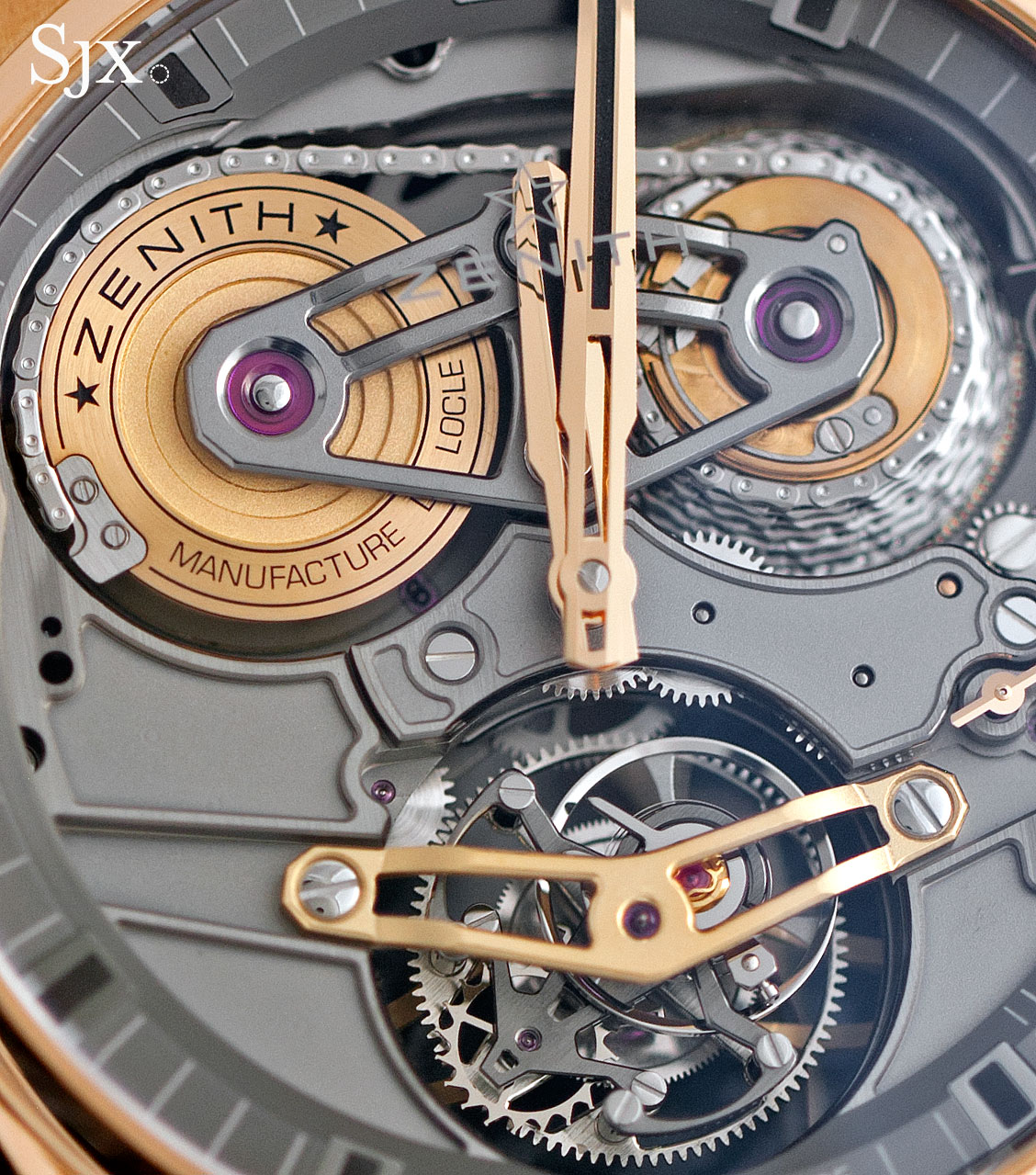 The most complicated wristwatch Zenith ever made is the Academy Christophe Colomb Hurricane that features a chain and fusee constant force mechanism as well as a gyroscope to keep the balance wheel always level (and it was also available as the curious neo-colonial Grand Voyage II). But it was cost almost US$300,000. More affordable at less than half the price (it’s all relative), and slightly less complex, is the new Academy Georges Favre-Jacot Tourbillon, Zenith’s first watch combining the chain and fusee with a tourbillon regulator.

Zenith’s modular approach of combining or iterating complications and movements is reflected in the calibre 4805, which combines the chain and fusee mechanism with the brand’s existing tourbillon. This strategy has been popular amongst watchmakers, as it is an effective route to make a watch more affordable, since it costs significantly less than developing a movement from scratch. Being the key visual component of the calibre 4805 movement, the chain and fusee is prominent, occupying the top half of the dial, with the barrel on the left and the fusee (a cone shaped pulley) on the left. A mechanism that using the principle of leverage to even out the energy delivered by the mainspring as it winds down, the chain and fusee is centuries old, having been found in pocket watches. It first appeared in a wristwatch in 1994 (when Lange unveiled the Tourbillon Pour le Merite), and is now offered by several watchmakers, but the look remains novel and appealing.

Like with all other chain and fusee watches, winding up the chain is the best part, since the chain unwinds too slowly to make it visually compelling. Though finished in a basic manner with a tumble polished surface, the links of the chain are impressively small. Notable for its high-frequency – the balance oscillates at 36,000 beats per hour – the tourbillon sits at six o’clock, being the same one found in Zenith’s diverse offering of El Primero Tourbillons. It’s different from most standard tourbillons as the balance wheel is on a separate axis from the tourbillon cage, a construction that allows the tourbillon to be smaller and slimmer. This was necessary since the tourbillon was retrofitted to the El Primero only in the mid-2000s, some three decades after the movement was conceived in 1969. And the smaller balance wheel is also necessary for the 36,000bph frequency that requires significant energy to maintain; a larger balance requires more energy to move and is not feasible with a high-beat movement.

The view from the back matches that on the front, with the main plate and bridge both open-worked to give them a modern look. The finishing of the movement is simple but suited to the design and price. Because the base plate and bridges have been partially open-worked, parts of the watch are see-through, a feature that highlights key mechanisms, particularly the tourbillon. There is no dial, instead the hands sit on the main plate of the movement, which has been facelifted for a look in the same genre as Hublot and Richard Mille. This likely reflects the influence of Jean-Claude Biver, the former chief executive of Hublot who is now running TAG Heuer and Zenith. To go with the modern styling the case is large, 45mm in diameter and slightly under 15mm high. It’s a big watch, though in the black ceramic guise it looks slightly smaller than the same in rose gold.

The Academy Georges Favre-Jacot Tourbillon is a limited edition of 150 pieces each in black ceramic or rose gold.

On the topic of value, it’s worthwhile comparing the Academy Georges Favre-Jacot Tourbillon with the Ferdinand Berthoud FB1, which has exactly the same features (a tourbillon plus chain and fusee). The FB1 costs more than twice as much, but is constructed and finished in a more sophisticated and expensive manner.