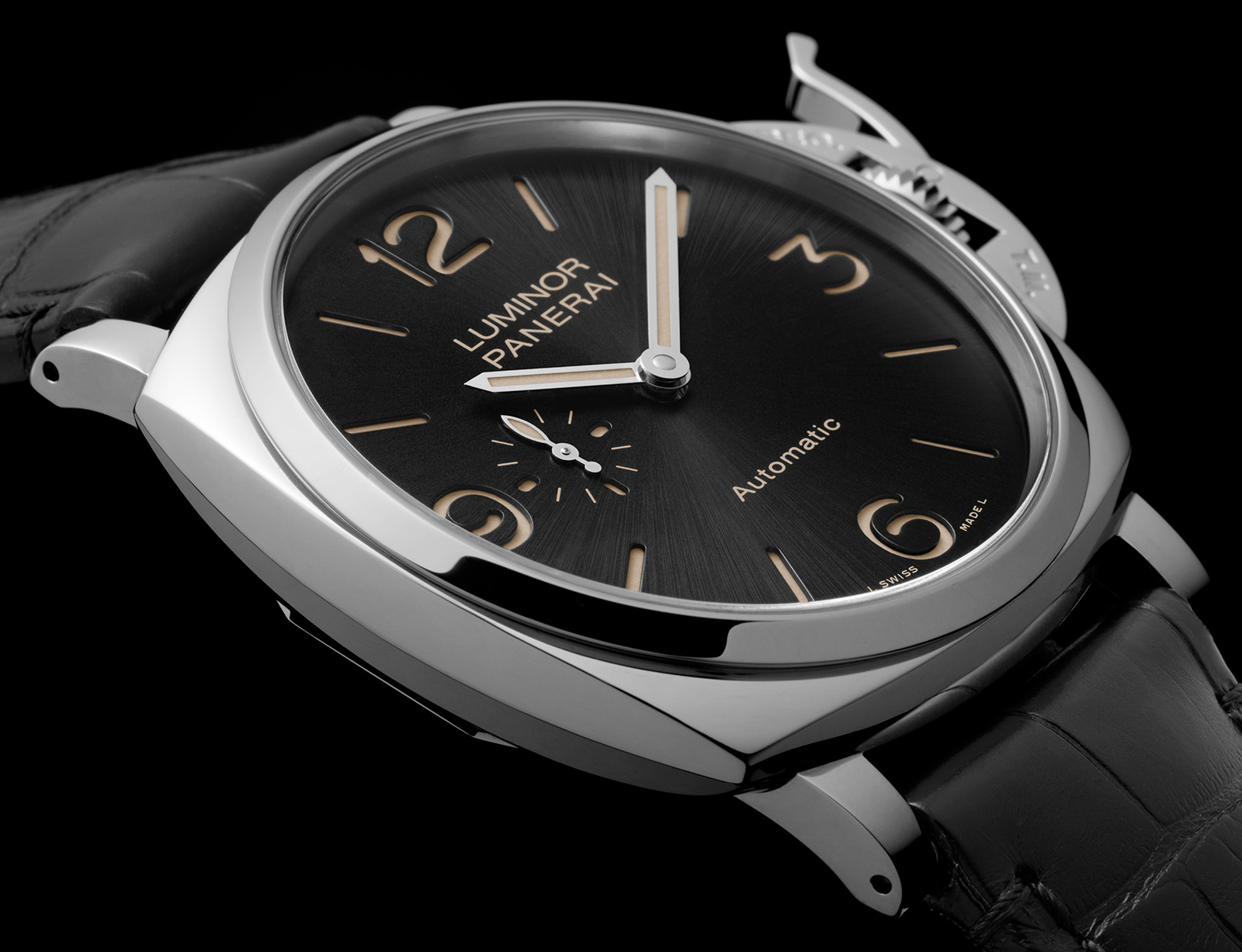 Two weeks after Panerai unveiled its first ever minute repeater (a decimal, second time zone repeater no less), the watchmaker will open Dive Into Time, a comprehensive exhibition of the brand’s historical timepieces, in its spiritual home of Florence (taking place 18 to 21 May; more details at bottom).

And alongside the exhibition inauguration Panerai has just unveiled a surprising line-up of new watches. The diverse new models, numbering 11 in total, to the collection make their debut just months after Panerai showed off its latest wares at SIHH 2016.

All the new releases will reach stores between September and October 2016. Prices are in Euros and include taxes.

A quartet of extra-thin models

Standing in stark and slim contrast to the typical chunky Panerai, the Luminor Due is Panerai’s first extra-thin wristwatch, standing just just 10.5mm high as a hand-wind or 10.7mm for the automatic. That’s not record-setting territory, but it’s drastic for Panerai, being almost half the thickness of the average Panerai wristwatch.

According to Panerai chief executive Angelo Bonati, the Luminor Due – due translates as “two” – is the second generation Luminor of sorts, conceived to appeal beyond the traditional Panerai buyer. The entry-level model is the hand-wound Luminor Due 3 Days that’s 42mm wide and 10.5mm high. It’s available in steel (PAM676) or red gold (PAM677). Both are powered by the P.1000 movement that has a three-day power reserve and hacking, zero-reset seconds. Larger than its hand-wound counterpart, the 45mm Luminor Due automatic is only marginally thicker at 10.7mm, and similarly rated to 30m. Inside is the P.4000, a self-winding movement with a micro-rotor, a common feature of slimmer movements.

The differentiation between the steel and red gold versions is the same as with the hand-wound Luminor Due. The stainless steel PAM674 has a black sandwich dial and the basic P.4000 movement, with a price of €10,400 (about US$11,800). Five new Luminor 1950 watches make their debut today, a pair in 42mm and three in 44mm, plus one Carbotech model. They have the familiar 1950 look but actually share a redesigned Luminor 1950 case, with slightly different proportions – most notably thinner lugs – and reduced thickness with a flat case back.

All five new Luminor 1950s are equipped with the P.9010. Essentially an upgraded version of the existing P.9000 – key improvements are a thinner profile and a balance bridge secured on two sides – the new calibre is automatic with a three-day power reserve, date and an independently adjustable hour hand. And rounding up the group is the Luminor Marina 1950 Carbotech 3 Days Automatic (PAM661). This has a case made from the carbon composite Panerai debuted on the Luminor Submersible Carbotech last year. The case gets its distinctive striped pattern from the layered carbon fibre sheets that comprise the material. The black dial has ecru Super-Luminova on the hands and markers; the round hour markers are appropriated from Panerai’s Submersible diver watches. The last of the new additions is a successor to the Radiomir Firenze of last year. This year’s edition (PAM672) is similar decorated on the case, but also features an engraved movement. Hand-engraved depicting Florentine motifs covers the front and flanks of the 47mm steel case, while the black, sun ray brushed dial has another emblem of Florence, the fleur-de-lis, at six o’clock. More unusually the movement inside is the P.3000/F. All of its bridges are covered with a relief engraving that repeats the Florentine motifs from the front (including an oversized fleur-de-lis). Unlike the hand-engraving on the case, the movement decoration is done by laser. All the new launches, as well as over 100 of Panerai’s historical timepieces, are on show at Dive Into Time. Exhibition details: