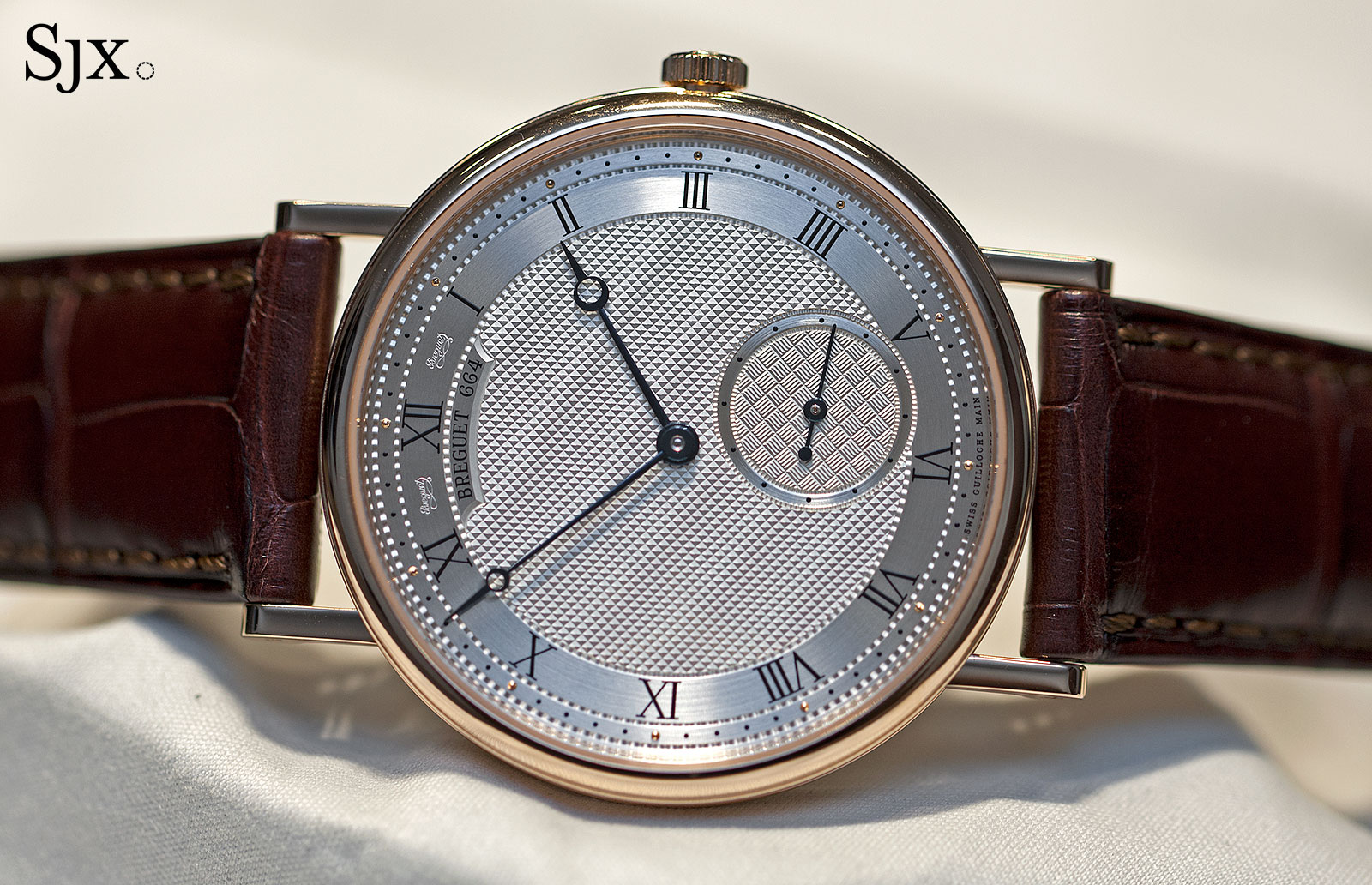 The Breguet 7147 is a handsome dress watch with elegant proportions, as well as a hint of quirkiness thanks to the off-centre sub-seconds, a detail that makes an eminently traditional watch a little bit more interesting. Though largish for a dress watch at 40 mm in diameter, the 7147 is appreciably thin, standing just 6.1 mm high thanks to the highly regarded extra-slim movement inside. And the 7147 may look familiar because it is not an entirely new watch, rather a facelifted version of the Classique 5140. One of the more accessibly priced Breguet dress watches, the Classique 7147 is almost identical to its predecessor from a distance, but recognisably different up close. To start with the Classique 7147 is significantly slimmer, just 6.1 mm – compared to the 10.8 mm of the 5140. This gives the 7147 an elegant profile and a cultivated persona. The other tweaks to the design are largely aesthetic, with the 7147 having a wider chapter ring for the hour numerals, wider-grain hobnail engine-turning on the centre of the dial, as well as a 45 degree tilt to the crosshatch guilloche on the seconds sub-dial. All the changes are minor in themselves, but together they give the 7147 a marginally more modern look than the 5140; the style remains vintage Breguet. As is tradition, the dial is a disc of solid 18k gold that is engine-turned, silver-plated and then coated with a clear varnish to prevent tarnishing. The individual number of the watch is printed on the dial at 12 o’clock, just beside the Breguet logo, a tradition that started with the original Breguet pocket watches. And on either side of the 12 o’clock marker is the Breguet “secret signature”, a tiny engraved “Breguet” in italics that was originally used on Breguet pocket watches to distinguish the real deal from fakes. The hands – Breguet hands naturally – are made of blued steel.

Despite being an entry-level model, the Classique 7147 is equipped with an extra-thin movement that has its origins in the Frederic Piguet calibre 70 introduced in 1970 (and later known as the calibre 71). Elegantly thin and refined, if slightly delicate, the calibre 71 is now known as the Breguet calibre 502.3SD and found only in Breguet, or sister company Blancpain’s, watches. Despite being 46 years old, the calibre 502 is comparable in height to more recent ultra-thin movements, being just 2.4 mm high. Over the years the calibre 502 has been heavily upgraded, most notably with a free-sprung, adjustable mass balance, as well as a hairspring in silicon, a material valued for its immunity to magnetism and temperature changes. Such tweaks are substantive improvements that improve the timekeeping and reliability of the calibre. That being said, the movement still retains its distinctive construction that makes it instantly recognisable, namely the off-centre rotor, open barrel that reveals the mainspring as well as the sub-seconds at five o’clock. And it is the unusual movement construction that places the seconds at five o’clock.