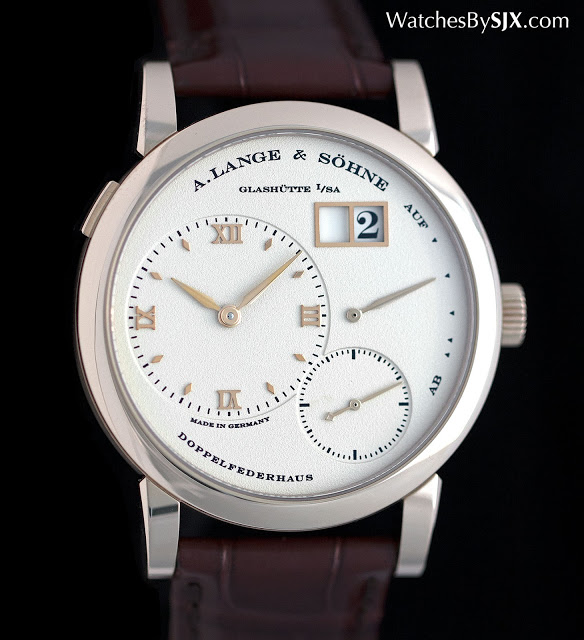 Introduced in December last year but never announced publicly, the Lange 1 Honey Gold is a limited edition of just 20 watches proffered to key clients of A. Lange & Söhne. This exceptionally rare watch is a first generation Lange 1, with a case made of honey gold, as well as a unusually decorated movement reminiscent of the Handwerkskunst timepieces.

Honey gold is an alloy of 18k gold Lange has used on couple of limited editions, most recently on the 1815 “200th Anniversary F.A. Lange”. With just 20 made, the Lange 1 Honey Gold, however, is the smallest run of any of the honey gold watches. While Lange did made Lange 1 limited editions on a regular basis in the past, that practice has since stopped. This makes the honey gold edition even more unusual. With a hardness of just over 300 HV (Hardness Vickers), honey gold is significantly harder than the usual gold alloys used for watches which are typically between 150 to 290 HV. This useful quality renders it more resistant to scratches.

Beyond the science, the metal is also unusual in colour, an pinkish shade somewhere in between rose and yellow gold. The Lange 1 Honey Gold pairs the metal with a pale yellow grained dial, making it perhaps the only Lange 1 ever with such a dial finish; most Lange 1 watches have a smooth, satin-finished dial. Though the dial texture is attractive and different, its finish means there is slight bleeding on the edges of the printed text. Interestingly, none of the gold elements on the dial, like the hands, hour markers and date frame, appear to be made of honey gold. Instead they are likely rose gold. The dressed up movement

Though the movement inside is the L901.0, the calibre found inside the original Lange 1, it is finished in a significantly different manner. The three-quarter plate is German silver but finely frosted, giving it a more muted tone than the damaskeened plates found in most Lange watches. A pair of inset bridges (the smaller one for the keyless works and the other for the seconds train) are hand-engraved with curlicues like those found on the balance and escape wheel cocks. Both the frosted plate and extra engraving are similar to the decoration found on the pricey but beautiful Handwerkskunst watches – handwerkskunst translates as “craftsmanship” – the newest being the 1815 Tourbillon Handwerkskunst. But unlike the Handwerkskunst watches, the Lange 1 Honey Gold does not have hand-engraved text on the movement, instead the lettering is engraved by machine, as on a standard Lange 1.