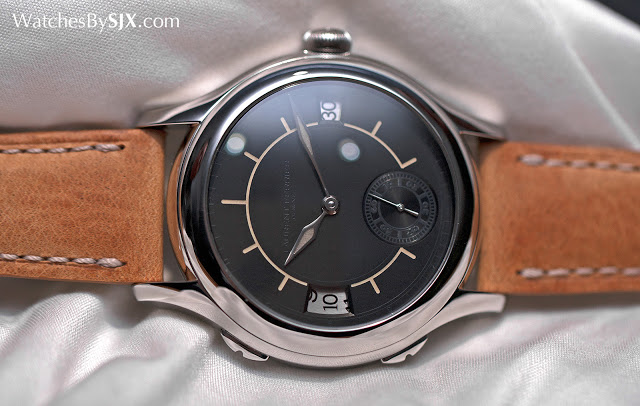 A functional travel watch with a top class movement, the Laurent Ferrier Galet Traveller is now available in stainless steel with a vintage-style “sector” dial. Here’s a look, complete with original photos and price. Impeccably finished and eminently functional, the calibre 230.01 displays twin time zones. The disc at nine o’clock shows home time (back where the traveller came from), while the central hands indicate local time (at where the traveller is). Inspired by a system originally found in 1950s Patek Philippe travel watches, a pair of pushers in the case set the hour hand in one hour intervals; the date disc moves forwards and backwards in sync with the local time. The Galet Traveller Boreal is fitted with a vintage-inspired, but obviously contemporary dial. The hour markers are highlighted in Super-Luminova, either ivory or pale green, and sit on a circular track, a style that is usually referred to as a sector dial. Finished with a faint vertical brushing, the dial itself is dark grey, with the Laurent Ferrier logo and markings on the seconds sub-dial in a similar colour, rendering them almost invisible – a tasteful and appealing detail. Though vaguely similar in shape to the traditional Laurent Ferrier hands – known as assegai after the tribal spear that inspired them – the hands on the Galet Traveller Boreal are larger and filled with Super-Luminova, improving their legibility.