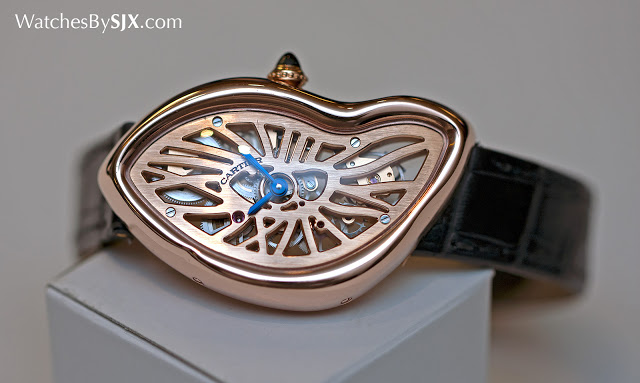 Cartier introduces its iconic Crash wristwatch with a skeletonised form movement in pink gold, a limited edition that is the final run of the open-worked Crash. We bring you a first look with original photos, specs and pricing. Cartier unveiled the first ever skeleton Crash wristwatch in 2015, and the 67-piece limited edition was a runaway success. At SIHH 2016 the Crash Skeleton will return in pink gold, also in a tiny run of just 67 pieces. And that will be it, the end of the skeletonised Crash wristwatch. Born in Swinging Sixties London The origin of the Cartier Crash is anecdotal and slightly macabre, but remains an integral part of the company’s lore. Legend has it that an executive at Cartier London (the London, Paris and New York offices of Cartier were separate entities at the time) was involved in a car crash, producing a completely mangled watch. Originally an elongated oval-shaped Maxi Ovale wristwatch, the destroyed wristwatch was the inspiration for the Crash, first introduced in 1967.

Regardless of the the veracity of the tale, the resulting wristwatch has become one of the iconic Cartier designs. In fact, an original Crash made by Cartier London (shown above) recently sold for over US$140,000 at Phillips’ Hong Kong sale. The final run of the Crash Skeleton The sensuous, asymmetric form of the Crash looks richer in pink gold, with the blued steel hands providing a striking contrast with the warm tone of the case. Not only is the case Dali-esque in form, the contours of the bezel are sculpted, with its profile varying round the watch. While the original Crash was entirely about its aesthetics, the Crash Skeleton is made doubly interesting with its novel form movement. With the exception of the material, the case dimensions are identical to the platinum model, meaning it is about 10% larger than the original Crash wristwatch. It measures 28.15 mm wide and 45.32 mm long, compared with the 23 mm by 38 mm of the regular Crash. The larger size means it could pass for a men’s watch, though its narrow strap gives it a feminine bent. Mechanically the Crash Skeleton in pink gold is identical to its platinum counterpart, equipped with the 9618 MC movement. Though simple, equipped with only two hands for the hours and minutes, the 9618 MC is one of the more unusual movements of recent years. It’s a form movement that’s shaped exactly like the case, with a shape that approximates a kidney. That required some technical contortions, to fit the mechanics into the peculiar shape. Two barrels sit beneath the skeletonised bridges, giving this a respectable three day power reserve. The bridges and base plate are made of German silver, like the movement in the platinum model, but here they are plated in pink gold to match the colour of the case. The base plate of the movement, which has been skeletonised to form Roman numerals, is actually curved, echoing the curvature of the case. Likewise the mineral crystal in front is curved on two planes, vertically and laterally, requiring heating and pressing by hand to form the unusual shape. Pricing The pink gold Crash Skeleton is a limited edition of 67 pieces. The price will be approximately €55,000, with the exact retail price divulged at SIHH 2016 in January 2016.