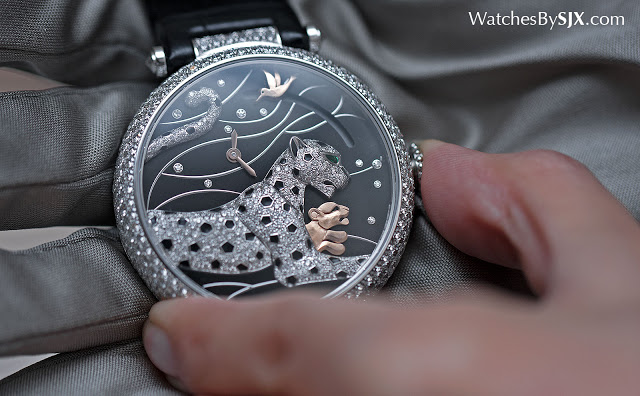 Cartier will introduce a trio of complicated watches for ladies at SIHH 2016, each bejewelled and bearing the familiar Cartier aesthetic but equipped with an in-house mechanical movement. Cartier demonstrates its historical prowess as a jeweller, and more recent accomplishments as a watchmaker, with the trio of ladies’ watches that will make their debut at SIHH 2016. All three watches are entirely new – one even has a newly developed movement – but classically Cartier in style; they combine design, gem-setting and creative mechanical watchmaking. Panthère Mystérieuse Invented in the 19th century by a clockmaker turned magician, the mystery clock became a Cartier signature in the early 20th century when the firm presented the first of its lavish mystery timepieces made of gold, crystal and gemstones. In 2013 the mystery time display was miniaturised into wristwatch form, and also put into the new Clé de Cartier case recently. The mystery wristwatch remained something for the gentleman, until now. The Panthère Mystérieuse combines the jeweller’s signature feline with a transparent, mystery time display. A motif first used by Cartier in 1914, the panther is found here languid and perched on top of the case, gazing at the transparent dial. Made of six parts to create the three-dimensional cat, the 39.5 mm case is white gold and covered in black lacquer. The watch is set with a total of 621 diamonds, with some sprinkled across the lacquered surfaces, and the rest covering the entire panther. As is tradition at Cartier, the panther’s eyes are made of two green emeralds.

While elegant jewelled watches such as this are typically quartz, this is mechanical, equipped with the same calibre 9981 MC movement found in the men’s mystery watches. It’s hand-wound movement cleverly constructed so that most of its footprint is occupied by the twin sapphire discs that carry the hands, leaving them floating in midair.

The Panthère Mystérieuse will cost €155,000 on an alligator strap, and €335,000 with a white gold bracelet entirely set with diamonds (bringing the total to over 15 carats). Panthères & Colibri The Panthères & Colibri is named after the dial motif that features a large, reclining panther, a smaller hidden panther cub, and a hummingbird (which translates as colibri in French). Made of a white gold disc, the dial is lacquered black, while the large panther is also white gold and set with diamonds. Both the baby panther and hummingbird are made of pink gold. And the case is also set with diamonds, bringing the total weight of diamonds to 5.7 carats. But it’s not just fancy decoration, the three elements of the dial are not static. In fact, the hummingbird is an on-demand power reserve indicator, while the panther cub is an automaton that emerges when the power reserve display is activated. Pressing and holding the the crown of the watch puts the movement into action. The hummingbird at two o’clock will fly upwards along the semicircular track, stopping to indicate the power reserve. Twelve o’clock indicates a fully wound movement, and one o’clock half empty. Simultaneously, the panther cub emerges from under the mother panther, staying out as long as the crown is depressed. Once the crown is released, everything goes back to their original positions. The 9915 MC movement inside is an entirely new calibre, comprising a hand-wound movement with an complication mechanism on top for the power reserve functions. While an ordinary movement that indicates the time and date has about 100 components, this is made up of 367 components, illustrating its complexity. A set of planetary gears lie behind the power reserve indicating hummingbird, and the baby panther requires a Maltese cross gear. Both are linked by a large, toothed ring that spans the entire dial and is connected to the crown, ensuring both the hummingbird and baby panther spring into action at the same time. The Panthères & Colibri will cost €170,000 on an alligator strap, and €350,000 with a matching white gold bracelet covered in diamonds for a total of 24.5 carats. Rotonde de Cartier Day and Night First introduced as a men’s watch in 2014, the Rotonde de Cartier Day and Night has now evolved into a ladies’ wristwatch, powered by the same movement but featuring an elaborately decorated dial. Heavily inspired by vintage Cartier comet clocks, the Rotonde de Cartier Day and Night shows the hours on the top half of the dial, while the minutes are shown by a conventional central hand. The lower half of the dial is a moon phase display, indicated by a large, ring-tipped hand.

The day and night disc with a stylised Sun and Moon point to the hours, which are Roman numerals printed in silver powder lacquer that reveal their texture up close. The moon phase is set with diamonds, with the new moons on each end also set with blue sapphires. The movement inside is the 9912 MC, a self-winding movement that’s the same calibre found in the men’s Day and Night wristwatch. Elegant as the dial is, the watch is slightly large for a ladies’ timepiece, measuring over 43 mm in diameter.