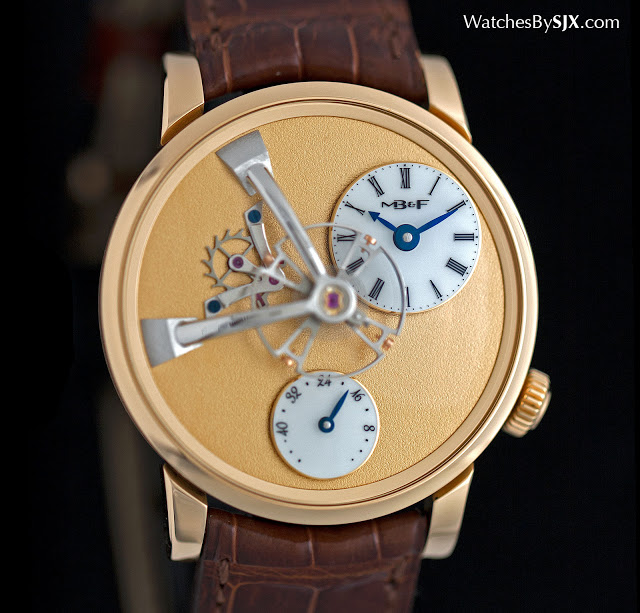 Arguably the most classical wristwatch from MB&F, best known for its timepieces that resemble spacecraft, the LM101 Frost takes its cues from vintage pocket watches. It is decorated, front and back, with a fine frosted finish, the only MB&F watch to date finished in this manner.

While all other Legacy Machines, namely the LM1 and LM2, are carefully finished, they are decorated in a more conventional manner, with rhodium-plated bridges covered in Côtes de Genève, parallel lines ground into the metal. The LM101, on the other hand, is entirely frosted, front and back. An old school look A gilded surface treated to give it a fine, grained texture, frosted finishes were typical in 18th century pocket watches; the original Breguet pocket watches, for instance, were mostly finished in this manner. Today a frosted finish is often employed by independent watchmakers who want to emulate that classic, 18th century look. Greubel Forsey and Roger W. Smith are two watchmakers that use a frosted finish exclusively, while F.P. Journe did it for his Historical Anniversary Tourbillon T30. Given that the Legacy Machine series was conceived as a homage to classical watchmaking, the finish on the LM101 is conceptually congruent. The watch is essentially a more elaborately finished variant of the original LM101, introduced in 2014 as the entry-level MB&F wristwatch. The frosted finish gives this watch a smooth and refined feel, and one that is tangibly more traditional than the other Legacy Machines. And the fact that this is yellow gold, the same metal most high-end pocket watches are made of, adds to its appeal. Notably this is the only serially produced MB&F wristwatch in yellow gold; the only one MB&F in this alloy was a one-off HM4. Mechanically the LM101 Frost is identical: it shows the hours, minutes and power reserve on two sub-dials, with an enormous balance wheel suspended over them. The dial is entirely frosted, with the finish accomplished by hand using a wire brush. That’s in contrast to mass produced frosted finishing that is done by bead blasting. Though the sub-dials resemble enamel, they are actually lacquered, comprised of a white base with a clear and glossy layer of lacquer above. The markings on the sub-dials are printed on the clear lacquer, so up close they float slightly above the white base. The movement has been similarly finished, with all the surfaces of the bridges frosted. Each bridge has its shape highlighted by the polished bevels. Similarly bevelling is found on the countersinks of each screw and jewel.  Designed by MB&F itself but with the help of Kari Voutilainen, the movement was also conceived to resemble a pocket watch calibre. Take for example the bridges, which are widely spaced, leaving channels between them where the base plate is visible. In contrast, modern movements tend to have the bridges close together. The only element of the movement that is distinctly modern are the wheels for winding and the barrel. Pricing The case is 40mm in diameter, making this the smallest MB&F ever, and available in yellow or red gold. The yellow gold version pictured here is limited to 18 pieces, while the red gold model is limited to 33 pieces. Both cost SFr58,000 before taxes, equivalent to US$57,000.