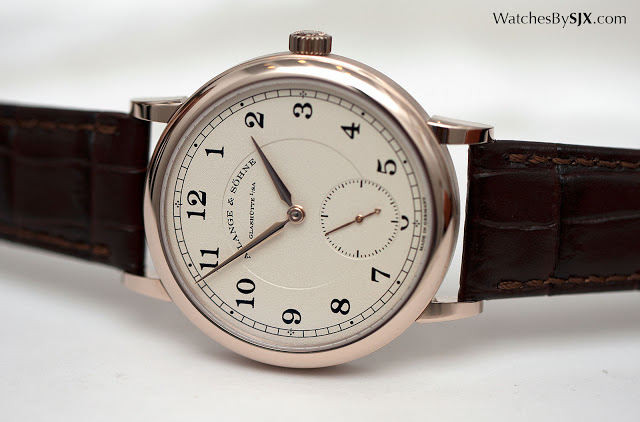 Honey gold was introduced by A. Lange & Söhne in 2010 and used only once before, on the 165th Anniversary “Homage to F.A. Lange” three-piece set. On yet another anniversary, this time the 200th birthday of F.A. Lange, honey gold makes a return with the 1815 “200th Anniversary F. A. Lange” limited edition.’

A gold alloy exclusive to Lange

Lange introduced a good number of watches 1815 timepieces this year, including the recent boutique edition chronograph, because Ferdinand Adolph Lange was born in 1815, a year best known for Napoleon’s final defeat. While the German watchmaker promises something more complicated at the end of the year, the 1815 “200th Anniversary F. A. Lange” in honey gold is the most unusual edition so far.

Visually honey gold is a cross between yellow and rose gold, being a pale but warm tone. It’s an unfamiliar look, but one that quickly grows on you. Honey gold has a tiny bit of silicon inside, making it slightly shinier and also harder. But like conventional gold alloys, it is still an 18 karat gold alloy, being 75 percent pure gold. Exclusive to Lange in watchmaking, honey gold costs more than ordinary yellow gold as a raw material, and is also more difficult to cast and machine. That’s why the honey gold 1815 costs as much as the platinum version of the anniversary 1815 introduced earlier in the year, which makes it rather pricey for a time-only gold wristwatch.

Though the case material differs, the case dimensions are exactly the same as the platinum edition. It’s 40mm in diameter, with a small step at the base of the bezel, a feature that’s slowly becoming standard on the 1815. Though a minor detail, the step serves to give the watch more visual depth, and also make the bezel seem smaller. Beyond the case material, another unusual feature is the dial. Most 1815 watches, including the new boutique edition chronograph, have smooth dial finishes. The honey gold 1815 is more interesting, with a granular surface finish that’s meant to evoke the texture of the silver dials on vintage marine chronometers. While the effect is appealing, setting it apart from other 1815 watches that look similar, the historical inspiration is confused since the 1815 is modelled on vintage pocket watches rather than marine chronometers. Though the movement is simple, it does not look plain. The decoration is lavish and typical of Lange movements. In familiar Lange style, most of the movement is covered by a three-quarter plate, a feature Ferdinand Adolph Lange adopted from English watchmaking, then the pre-eminent. The three-quarter plate is made of German silver, an alloy sometimes known as nickel silver that is actually mostly copper, with a bit of nickel and zinc. It’s soft and oxidises over time, which is why Lange movements develop a patina with age. Another signature is the hand-engraved balance cock, also inspired by the same feature in antique Lange pocket watches. As is expected of a Lange the movement is strikingly decorated. Even up close the finishing is excellent.