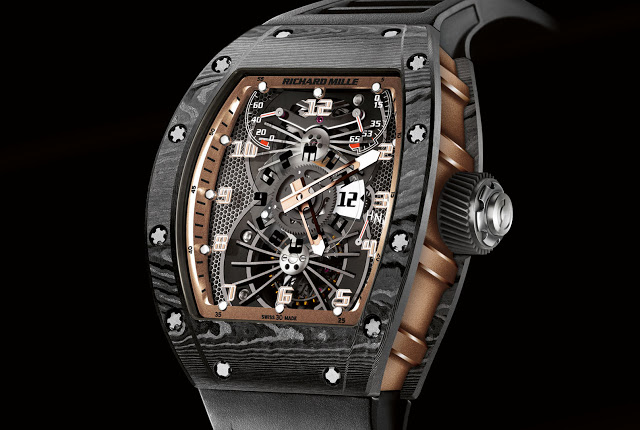 A limited edition of just eight watches for Richard Mille‘s boutiques in Asia, the RM 022 Aerodyne Asia Edition is a tourbillon with a second time zone display that’s the highlight of the brand’s line-up for Watches&Wonders 2015 in Hong Kong. The bezel and back of the case are made of North Thin Ply Technology (NTPT) composite, a lightweight carbon fibre reinforced polymer with a distinctive woodgrain pattern. Sandwiched in between the NTPT Carbon plates is a red gold case band, echoed in the red gold hands and chapter ring.

Now a favourite material of Richard Mille, NTPT Carbon gets its unusual look from the manner in which it’s made. Layers of woven carbon fibre impregnated with resin are set in an autoclave, a special oven that cooks the material at high heat and pressure. The same material is used for different case components in both the RM 011 Asia Edition and RM 27-02 Rafael Nadal. Power reserve is indicated on the scale at 11 o’clock, while the torque indicator sits at one o’clock. While the former shows how much energy is left in the mainspring, the latter displays the tension inside the mainspring, which should be kept within the optimal range (not fully wound or nearing exhaustion). A small hand at four o’clock is the function selector, a trademark feature of movement developer Renaud & Papi’s creations. Pressing the button on the top of the crown allows the crown to be used for winding, setting or remaining in the neutral position The second time zone is indicated at three o’clock, with a sapphire disc in the centre of the dial. A button at nine o’clock advances the second time zone by one hour intervals.

Because the dial is clear sapphire, the baseplate forms the face of the watch. The Aerodyne gets its name from the aerospace-inspired baseplate, made of orthorhombic titanium aluminide with a honeycomb pattern. The same alloy with a similar structure designed for strength and lightness is used in aircraft wings.  The case measures 48mm long and 39.7mm wide.

The price has not been announced but expect it to be in the region of US$500,000. It’ll be available only at Richard Mille boutiques in Shanghai, Hong Kong, Macau, Jakarta , Kuala Lumpur and Singapore.