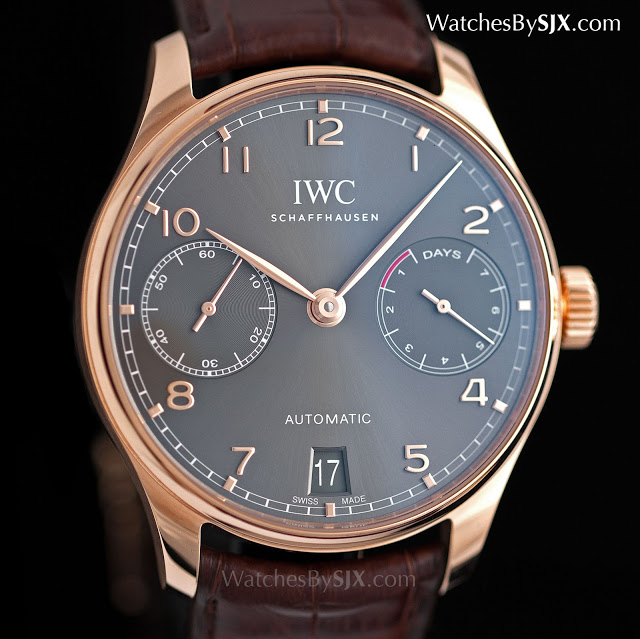 Self-winding with a week long power reserve, the IWC Portugieser Automatic has a date and power reserve display, making it an eminently practical timepiece. The second generation introduced at SIHH 2015 is visually unchanged from its predecessor, but is equipped with the newly developed calibre 52010. Functionally the movement is identical to the outgoing calibre 5000, but boasts significant improvements, including the winding pawls and wheel in black ceramic.

Because the latest generation looks and feels exactly like the previous one, it could be criticised as lacking in creativity. But it’s hard to better the symmetrical, functional and distinctive design of the Portugieser Automatic, so the new generation remains reassuringly familiar. In many respects the new Portugieser Automatic is similar to the revamped Lange 1, visually identical but powered by a new movement that’s definitely more modern, arguably superior, but perhaps like charming.  One of the key improvements in the calibre 52000 movements is the ceramic Pellaton winding mechanism. Named after its inventor Albert Pellaton, the technical director of IWC for 22 years, the winding mechanism is a simple and efficient system uses a rocker and cam with pawls for bidirectional winding. While operating on the same principles as Pellaton’s 1950 design, the winding system now has the pawls and winding wheel in black ceramic, a durable material that’s hard and nearly friction free. And the seven day power reserve is now contained in two smaller mainsprings, instead of one gigantic mainspring. That provides more linear torque over seven days (promising better timekeeping over the entire period), as well as avoiding the problems of managing the extreme forces generated by such a large mainspring, especially when fully wound, a critical problem during the early days of the calibre 5000. The calibre 52000 has also been designed with aesthetics in mind, with most of the bridges being partially skeletonised to reveal the mechanics below. The barrel bridge for instance has two large apertures revealing the twin barrels below, while the rotor is slimmed down to obstruct less of the movement.

For the same reason the finishing of the movement is more decorative than in the calibre 5000, with more prominent bevelled edges. The luxe version of the movement (below) found inside the perpetual calendar even have a solid gold rotor as well as blued screws. Traditionalists will bemoan the smaller balance in the new calibre, compared to the impressively large balance wheel in the calibre 5000. Though large balance wheels were valued in the past for their high inertia and stability, they are not functional imperatives in modern watchmaking. Small balance wheels on the other hand allow for longer power reserves as well as greater shock resistance. The new movement inside means the Portugieser Automatic is marginally thicker, standing 14.5mm high, compared to its 13.9mm predecessor. That’s nearly imperceptible, especially since the case diameter remains exactly the same at 42.3mm. Big enough to have presence on the wrist but not overly so, that’s probably as large as a gentleman’s watch can go without being chunky. In many respects the new Portugieser Automatic is similar to the revamped Lange 1, visually identical but powered by a new movement that’s definitely more modern, arguably superior, but perhaps less charming because it’s much more polished. Commendably IWC has kept the prices almost identical to those for the previous generation. Available in red gold or steel, the new Portugieser Automatic is priced as follows:

US prices for the red gold model went up by US$200 while the steel is US$600 cheaper. And in Singapore the price increase is S$900 and S$2900 for the steel and red gold respectively.