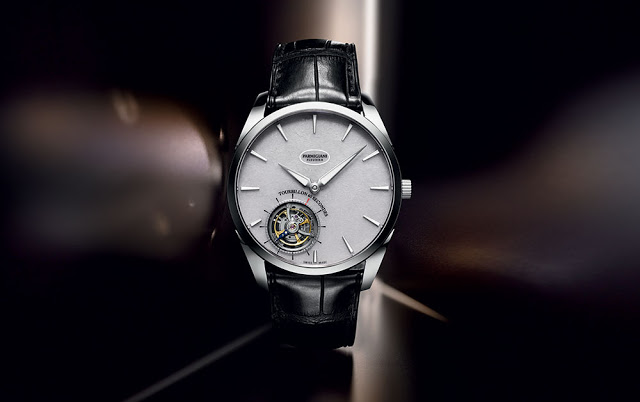 The world’s thinnest automatic flying tourbillon, the Parmigiani Tonda 1950 Tourbillon also boasts the lightest tourbillon cage ever, and is offered with a variety of dial finishes, including white or black jade. Just 3.4mm high, the calibre PF517 inside the Tonda 1950 Tourbillon is the slimmest automatic flying tourbillon on the market. Developed and made by Parmigiani, the PF517 movement has several features typical of extra-thin calibres, including a micro-rotor and a flying, instead of a standard, tourbillon. Having no bridge to secure the tourbillon on the dial side – hence the “flying” moniker – renders the movement slimmer and also leaves the view of the tourbillon unobstructed. The tourbillon has a titanium cage that weights just 0.255g, meaning it requires less energy to rotate. That leaves more energy to maintain precision timekeeping.

The tourbillon is at the unconventional position of 7:08 on the dial, a reference to the time at which Michel Parmigiani was born (in the year 1950 naturally) according to Parmigiani. But another reason for its unusual placement is the fact that it’s based on the PF700 (found in the Tonda 1950 Skeleton). That has the balance wheel in the same position, and comparing the two shows that the basic construction of both movements are the same.

The case measures 40.2mm in diameter and is available in rose or white gold. It’s just 8.65mm high, putting it amongst the thinnest tourbillon watches of any kind. Five dial variants are available for the Tonda 1950 Tourbillon: grey mother of pearl, white or black jade, grained white, and deep blue with Geneva stripes.