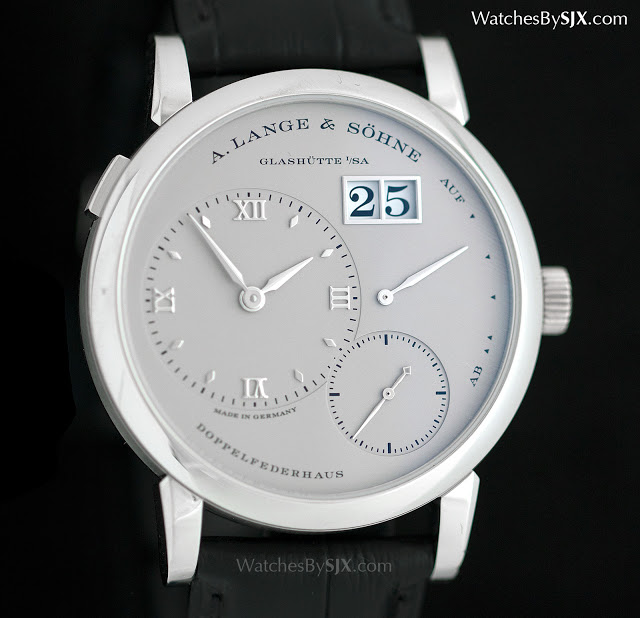 Since its introduction in 1994, the Lange 1 has become the public face of A. Lange & Söhne. The asymmetric yet perfectly proportioned dial is pleasing and distinctive. The second generation Lange 1 retains that original dial design, but throws in some major technical upgrades, particularly in terms of chronometric performance.

To understand why the Lange 1 is appealing is to understand the order in the seemingly randomly placed indications on the dial. Everything on the dial feels correct, despite the unconventional position, because everything fits nearly on a grid. In the original Lange 1, that look was cobbled together with a movement designed around the aesthetic – all the early Lange movements had to be realised swiftly. Remember that from the company’s resurrection in 1990, it took only four years to conceive and execute four new calibres.

Using the gear train from the reliable Jaeger-LeCoultre calibre 822 (just as with many other early Lange movements), the L901.0 movement in the first Lange 1 had an unusual internal layout. Much of the functional parts were squeezed to the left of the dial, leaving space for the big date mechanism on the right.

The new Lange 1 introduced at SIHH 2015 has a movement built from the ground up to accommodate the familiar Lange 1 look, but also offer significantly superior technical function. Visually the new Lange 1 looks exactly the same. The aesthetic differences are there, but they are minor. The case is still 38.5mm in diameter, though the bezel is ever so slightly narrower, with a barely discernible step at its peak where it meets the crystal. While the dial layout is identical, minor changes do exist.

The text on the dial remains the same, but the font is different, barely discernibly so. And the dial texture has changed as well: the sub-dials – for the hours, minutes and seconds – have a fine concentric guilloche finish known as azurage most commonly found on chronograph registers. The first generation dials were mostly smooth. With a new heart

The L121.1 movement is entirely new. To start with it has an in-house, free-sprung balance wheel, a feature that promises more stable timekeeping and one often found in higher-end movements. It’s larger than the balance in the original, giving it more inertia. And typical of a free sprung balance it has adjustable weights on its rim (a la the Patek Philippe Gyromax).

This set up promises better timekeeping than the ordinary, smaller Glucydur balance wheel in the first generation which had screws on the rim merely to approximate the look of a pocket watch movement. The position of the balance wheel in the new L121.1 indicates the unusual movement construction. Sitting right next to the crown (try finding another movement with this layout), the balance wheel is positioned above the keyless works (for winding and setting), to maximise the volume inside the case. That is how the movement constructors have managed to squeeze in more features into a movement that is slimmer than the original. Despite being 0.2mm slimmer than the first generation at 9.8mm high (in the case), the new Lange 1 has an improved instantaneously jumping date mechanism. The twin date discs in the first generation slowly changed over nearly an hour, here they jump instantly and simultaneously at 12 o’clock (just like in the Lange 1 Tourbillon Perpetual Calendar).

To do that the date mechanism gradually gathers power in the hours before midnight (essentially winding up a small spring lever), that releases to trigger both discs at 12. Like the first generation, the new Lange 1 has double barrels, which give it a power reserve of over three days (the original ran for just three days).

Once it runs out of power, the L121.1 stops beating with the seconds hand exactly at 12. While unquestionably superior technically, the new movement lacks some of the charm of the old calibre that was designed to look good, dial and back.

The new L121.1 is simplified visually, with a three quarter plate that has no plates set into it. And it has fewer gold chatons for jewels, which admitted serve no function but look good. Even the polished steel cap on the escape wheel cock looks less elaborate, lacking the inward angle of the first generation.

The movement is still exceptionally attractive and well finished – the decoration on the hardly visible pallet fork bridge below the balance wheel illustrates that.