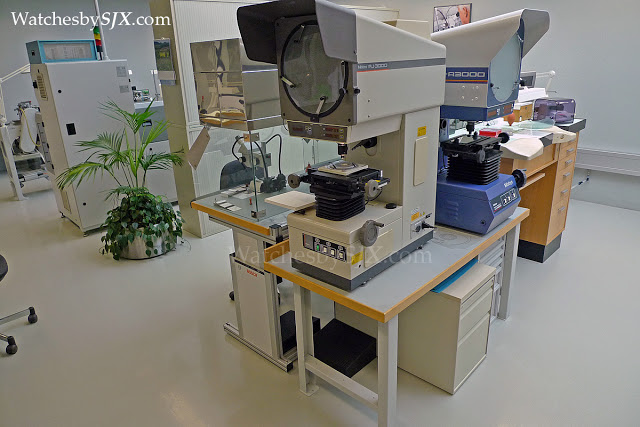 Since 2003, starting with the Double Split, Lange has been making hairsprings in its manufacture in Glashütte. Production is only sufficient to for portion of its production, so the in-house hairsprings mainly end up in high-end, complicated models like the Tourbograph, Datograph Perpetual and Zeitwerk.

During the GDR days, hairsprings could not be imported so the state-owned watch enterprise, Glashütter Uhrenbetriebe (GUB), had to make its own hairsprings. Reiner Kocarek, the resident hairspring specialist, used to work for GUB and it was there he acquired the requisite know-how.

The hairspring begins with the raw Nivarox alloy which Lange buys from a supplier (below). This wire is 0.5 mm in diameter. It is then draw through a series of dies, stretching it out and reducing its diameter. This is done repeatedly until the wire is a mere 0.046 mm in diameter.

At this stage, however, the cross-section of the wire remains round, while the profile of a hairspring is rectangular. So the wire is then passed through a pair of rollers to flatten it. As the wire emerges from the rollers it is measured by a laser micrometer.

The resulting hairspring must be excruciatingly precise. If it is off by a mere 0.1 microns, the resulting escapement can deviate by up to three minutes a day.

After the hairsprings have been stretched and flattened, they are cut and several are manually coiled, several at a time. They are then tempered in an oven. Afterwards the hairsprings have to be separated, via a process that is definitely the most low-tech in the whole manufactory. The coiled hairsprings are placed inside an empty plastic chocolate box (I suspect it’s Ferrero Rocher) and shaken vigorously. They magically pop apart and separate. In-house hairspring production has increased in volume since it began, with more and more Lange movements now featuring the proprietary balance spring. Though the long-term goal is to fit the majority of production with in-house hairsprings, that is still a long way away.

Though a small part of the watch, the hairspring is a key component. Manufacturing this in-house demonstrates Lange’s ability and dedication as a maker of top quality watches.