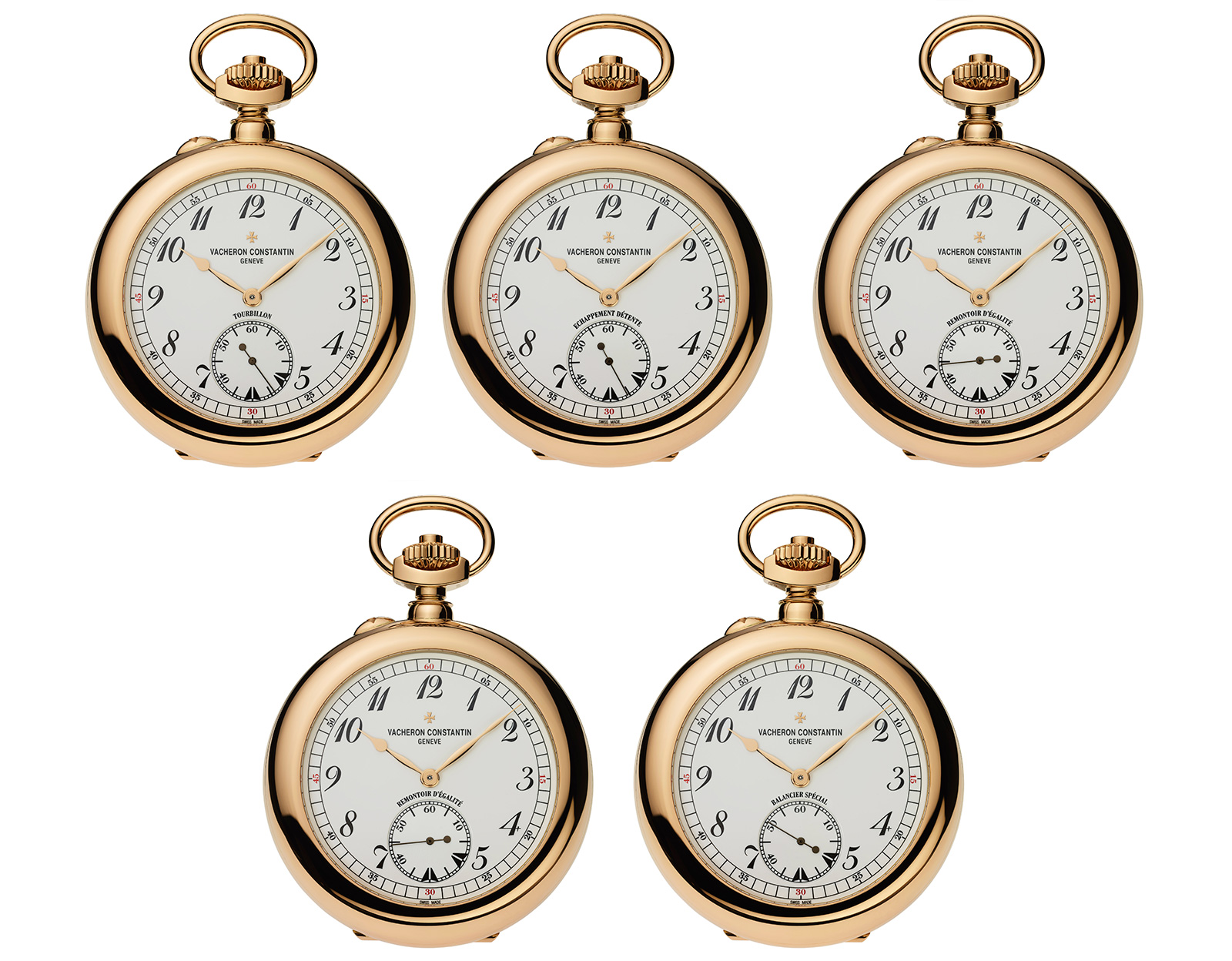 The Coffret Observatoire (“observatory case”) is Vacheron Constantin‘s most significant recent Atelier Cabinotiers project. Dedicated to making custom and bespoke watches, the Atelier Cabinotiers was tasked by a lucky collector to create a set of watches modelled on the finest observatory chronometer timepieces (a tradition that ended in the late sixties).

The result is a set of five pocket watches, all equipped with tourbillon ebauches (movement blanks) from the thirties. Each of the movements have been completed, decorated and fitted with a different precision escapements, ranging from a spring detent to a remontoir d’egalité constant force mechanism. Fans of hardcore traditional watchmaking will quickly recognise the movements as real chronometers from a long gone era of watchmaking.

Each of the five pocket watches appears identical from the front, with legible enamel dials with unusual arrow-shaped markings at the 20 and 30 second mark on the seconds sub-dial. These are inspired by similar markings found on the dials fitted to movements sent for observatory timekeeping tests and contests, meant to aid measurement of timekeeping. Discreet lettering over the sub-seconds reveals what is inside each watch. The simplest of the five is fitted with sixty second tourbillon. Vacheron Constantin has not revealed the origin of the ebauches used in this set of watches, but there are enough clues for an educated guess. With the twin bridges and a three-armed tourbillon carriage, this movement is characteristic of Albert Pellaton-Favre and his son James Pellaton, in a style that is distinctive enough that such movements are known as Pellaton tourbillons.

Their work is one of the inspirations for the Laurent Ferrier Galet Tourbillon. The Pellatons were famed tourbillon constructors who made movements for an honour roll of brands including Patek Philippe, Breguet and Girard-Perregaux (a nephew of Albert was the famed Albert Pellaton of IWC). Vacheron Constantin also had Pellaton tourbillons of its own, and this is likely an movement entered into a chronometer trial in the past and never sold. Equipped with a similar movement is the second watch of the set, featuring a spring detent escapement. Commonly found in marine chronometers, the detent escapement is a direct impulse escapement with a tension spring for the escape wheel, meaning it needs no lubrication and boasts superior accuracy. However such escapements are fragile and tend to stop when shocked, which is why they are almost never found in wristwatches. Again with a Pellaton style movement is what Vacheron Constantin terms a tourbillon with a marine chronometer balance, also known as a split, bimetallic balance. Common in pocket watches and marine chronometers, the split balance self-compensates for changes in temperature, due to the balance wheel being made of two different metals with open ends. The two metals, usually brass and steel, react to temperature differently, thus averaging out the error.  Four gold weights plus 12 screws on the rim of the balance allow for fine regulation by subtly changing the orientation of the weights and screws to ensure the balance is evenly weighted all along the rim. Next is a tourbillon with constant force escapement. This features a spring above the escape wheel that stores and releases constant amounts of energy each time, so that the impulse to the escapement is consistent, even as the mainsprings of the watch winds down. That means that the watch should keep good time even towards the end of the power reserve. Here the movement has twin barrels, arranged in a style typical of movements found in grand sonnerie. The origin of this movement is likely one of the great movement makers of the period like Victorin Piguet. Vacheron Constantin did not reveal the price for the Coffret Observatoire, but with similar vintage pocket watches selling for the mid six figures at auction, this set of five certainly would have cost millions.

Addendum 27 March 2015: According to a discussion on The Hour Lounge, the official Vacheron Constantin forum, the Coffret Observatoire set cost a whopping 135,950,000 Taiwan dollars, equivalent to about US$4.34 million.