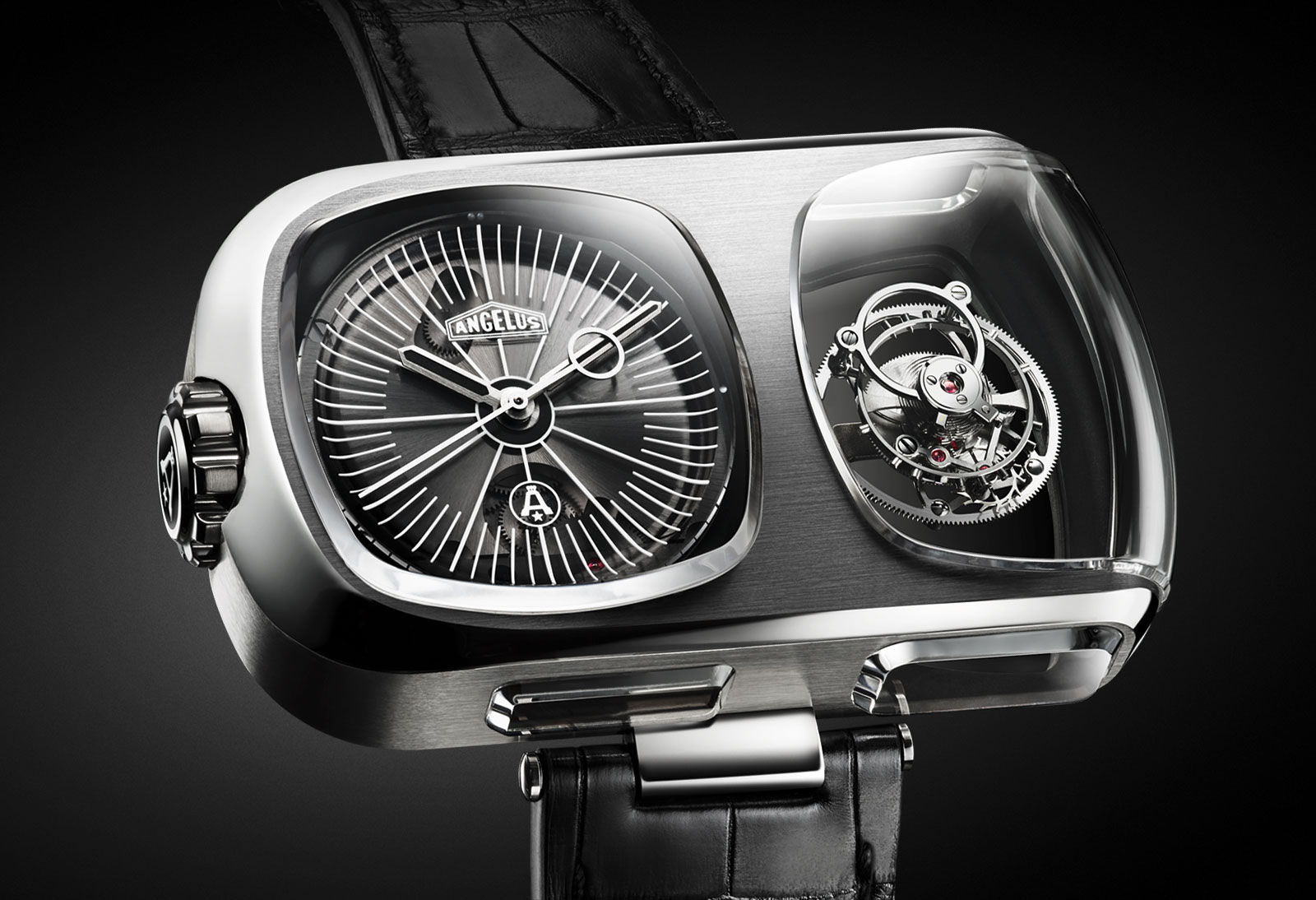 An old name recently resurrected by La Joux-Perret, Angelus presents the U10 Tourbillon Lumière, a tourbillon with dead-beat seconds. It’s a well conceived medley of seventies industrial design – and also a subtle and witty inside joke about the triumph of mechanical watchmaking. To understand why the Angelus U10 Tourbillon Lumière is one of the drolly entertaining statements of Baselworld 2015, you have to understand where it comes from. Angelus was a brand that died in the seventies, along with most of the Swiss watch industry when the cheap quartz watch came along. Now the label has been revived by La Joux-Perret, the ingenious movement specialist that’s the sister company of Arnold & Son (both are owned by Citizen of Japan). Appropriately enough, its first timepiece takes over where the original Angelus ended – in the seventies. The U10 Tourbillon Lumière is equipped with a large, oblong case inspired by the watches and industrial design of that period – echoes of the early Beta 21 quartz watches are obvious. And to top it all off, the U10 Tourbillon Lumière has a dead seconds that ticks in one second steps, just like the quartz watches that decimated Angelus forty years ago. Instead of remaking some of its more famous vintage watches like the Chronodato (the first ever chronograph with date), Angelus has created the intriguing U10 Tourbillon Lumière. Visually it is pure seventies, with the case inspired by German industrial designer Dieter Rams’ creations for Braun. Measuring a large 62.75 mm by 38 mm, the case is made from BO-988, a steel alloy with higher corrosion resistance than the 316L steel typically used for watch cases. The movement was developed by the talented team at La Joux-Perret, the same people responsible for the recent complications from Arnold & Son. It’s a one minute flying tourbillon with the tourbillon regulator mounted on a titanium arm, seemingly floating in between two large sapphire crystals. That effect is enhanced by the matte black coating on the inside of the case around the tourbillon. Also made of clear sapphire, the aperture for the dial is also matte black on its inside. The seventies aesthetic continues with the bowl-shaped dial with a radial motif, modelled on the Doney 14 transistor TV designed by Sapper and Zanuso for Brionvega. The seconds hand ticks forward in one second increments, a feature known as the dead-beat seconds that La Joux-Perret has used extensively in Arnold & Son’s collection. This is meant to invoke the quartz watches of the seventies, a “little wink at – and snub to – history”, according to La Joux-Perret technical director Sébastien Chaulmontet. At 16.25 mm in diameter the tourbillon cage is larger than most, though it beats at a traditional 18,000 beats per hour. While most contemporary timepieces of this style feature titanium cages, steel is the material of choice here, in order to mirror polish and bevel the carriage to a sufficient standard. Another traditional material used in the movement is the German silver for the bridges and base plate, though they are decorated in a modern manner. A laser engraved crosshatch motif decorates the bridges, while the ratchet wheels are similarly engraved then filled with black lacquer. Two large mainsprings drive the large tourbillon, giving the movement enough torque for 90 hours (or nearly four days) of power reserve. The case has seven sapphire crystals, on the front, back and sides, each of which is bevelled and set slightly above the case. One of the crystals is curved at 90 degrees, wrapping around the to show off the tourbillon. And another is for the power reserve indicator, located at six o’clock on the side of the case. The Angelus U10 Tourbillon Lumière is a limited edition of 25 watches. Pricing will be announced at Baselworld.