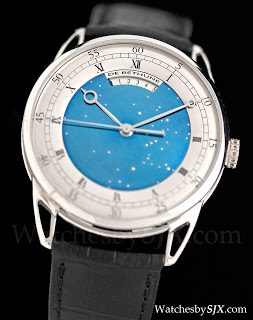 Denis Flageollet, the technical mind behind the brand, explained the DB25T is inspired by vintage pocket watches. That inspiration is especially evident in the sandblasted sterling silver chapter ring with Roman numerals, as well as the Breguet hands. Though the watch is large at 44 mm in diameter, it has an elegant and refined feel.

But there is still the trademark De Bethune flame blued titanium sky dial, set with solid gold stars. This is similar to the sky dial seen on the unique piece De Bethune made for Only Watch 2011. Over on the back the movement is both impressive and beautiful. The bridge is the familar De Bethune shape, but there is an additional escape wheel for the dead seconds mechanism. A clip of the dead seconds escapement in action

As is standard for De Bethune, the finishing is quite excellent, though not at Greubel Forsey standard. Note that the watch pictured is a prototype hence the roughness of certain parts. The 36,000 bph, 30 second tourbillon regulator is De Bethune’s patented titanium and silicon tourbillon cage with a silicon and platinum balance wheel. That means the tourbillon is ultra-light, weighing a mere 0.18 g. This is similar to the tourbillon first seen the the Dream Watch 3. As with all De Bethune watches this is a deeply compelling watch because it is inventive and well executed. The DB25T is a limited edition of 20 pieces in a platinum case, with a retail price of about EUR250,000.