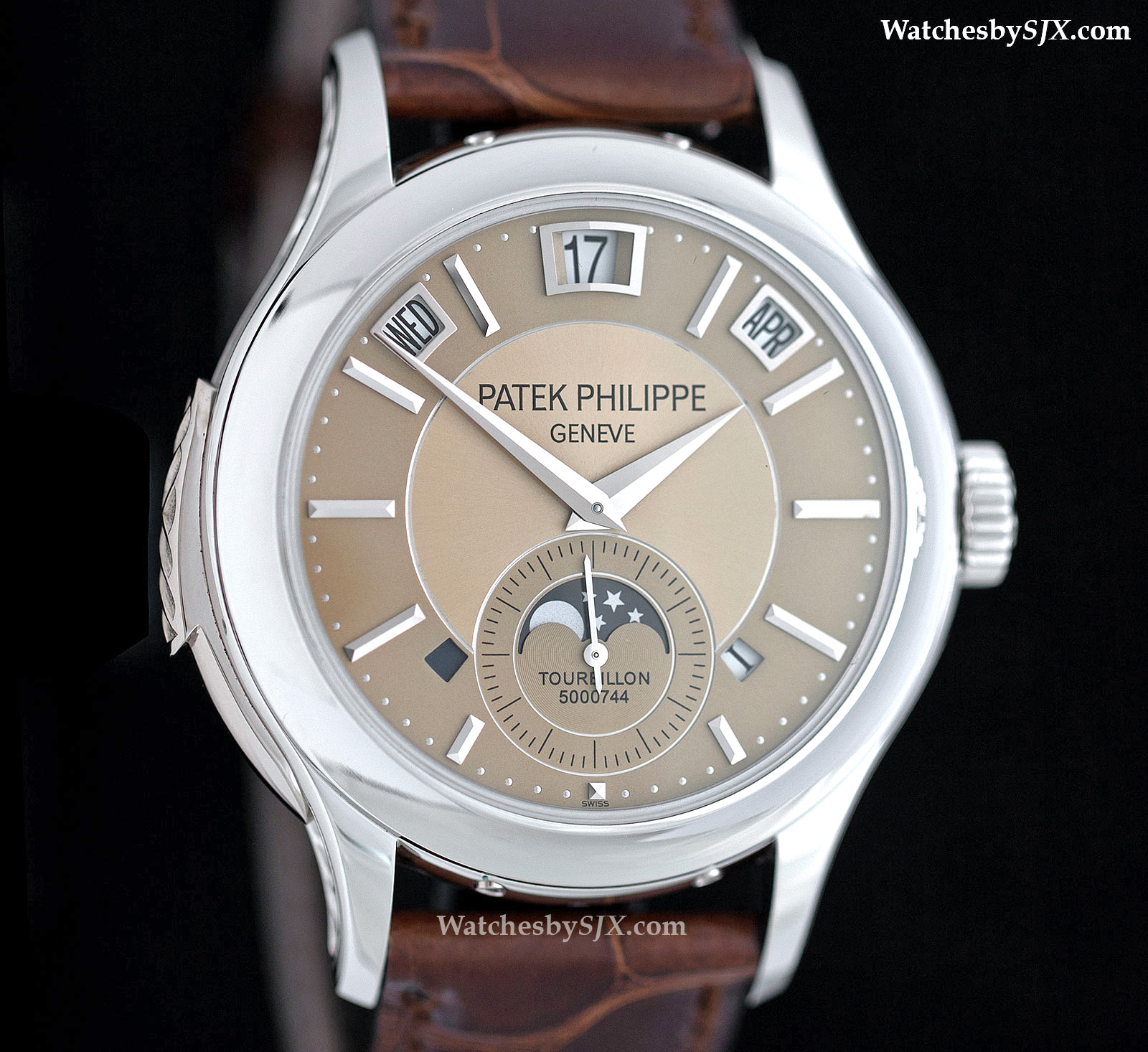 Patek Philippe‘s grand complications are arguably the best from any major watch brand, demonstrating superlative movement construction and finishing. One of the the Geneva watchmaker’s grandest complications is the Ref. 5207P. Equipped with a tourbillon, instantaneous perpetual calendar and a minute repeater, the Ref. 5207P is essentially an upgrade version of what was long Patek Philippe’s flagship wristwatch, the Ref. 5016.

Naturally several Patek Philippe wristwatches have superseded the Ref. 5207P in complexity since it was introduced at Baselworld 2008, the Grandmaster Chime for the brand’s 175th anniversary being a good example. But relatively speaking the Ref. 5207P is more subtle timepiece than most of its more complicated cousins. As repeater goes Patek Philippe is one of the best, and this is no exception. Though the platinum case (the metal is dense and heavy) mutes the sound ever so slightly, especially when compared with repeaters in gold cases, the 5207P still sounds magnificent.

It’s 41 mm in diameter and just over 16 mm thick, slightly chunky but not overly so. Made of 18k solid gold and galvanised with what Patek Philippe calls a “honey gold” shade, the dial is clean and modern, with large windows for the calendar indications arranged symmetrically around the top of the dial. On either side of the moon phase are small windows for the day and night function and leap year.

There is little ostentation on the front of the watch, but the case sides are heavily decorated with a relief engraving. In recent years Patek Philippe has favoured engraved cases for its complications – the Sky Moon Tourbillon is a good example of engraving gone mad – but in the 5207P the decoration is unobtrusive. This requires careful storing and management of the torque from the mainspring to ensure that the calendar changes correctly, without affecting the running of the rest of the watch. Because the movement has a tourbillon that requires more torque (due to the weight of the carriage) than a plain regulator, that is made slightly more challenging. Though the base movement is small, the display back reveals a disparity between the case size and movement, the calendar plate is just large enough so that the calendar displays sit on the very edge of the dial. Gripes about size aside, the movement is a spectacular example of high-end watchmaking. Every component is finished to the highest degree. Some of the components have such a smooth finish the finish resembles a liquid surface. One of the highlights is the centre wheel with its sinuously curved spokes, inspired by the large wheel of a topping tool, used in former times to cut teeth in gears. Made of solid 14k gold, the centre wheel requires 10 hours of work to achieve the lustrous finish that includes a mirrored surface and rounded spokes. Equally beautiful is the steel tourbillon bridge with a speculaire, or black polished, finish on the top, and a polished, bevelled edge all around. Black polishing requires several hours of painstaking polishing on a tin plate coated with an abrasive paste. The repeater hammers get the same speculaire finish, which is black when viewed from certain angles hence the name. Completing the finishing for pair of hammers for a minute repeater takes about eight hours.