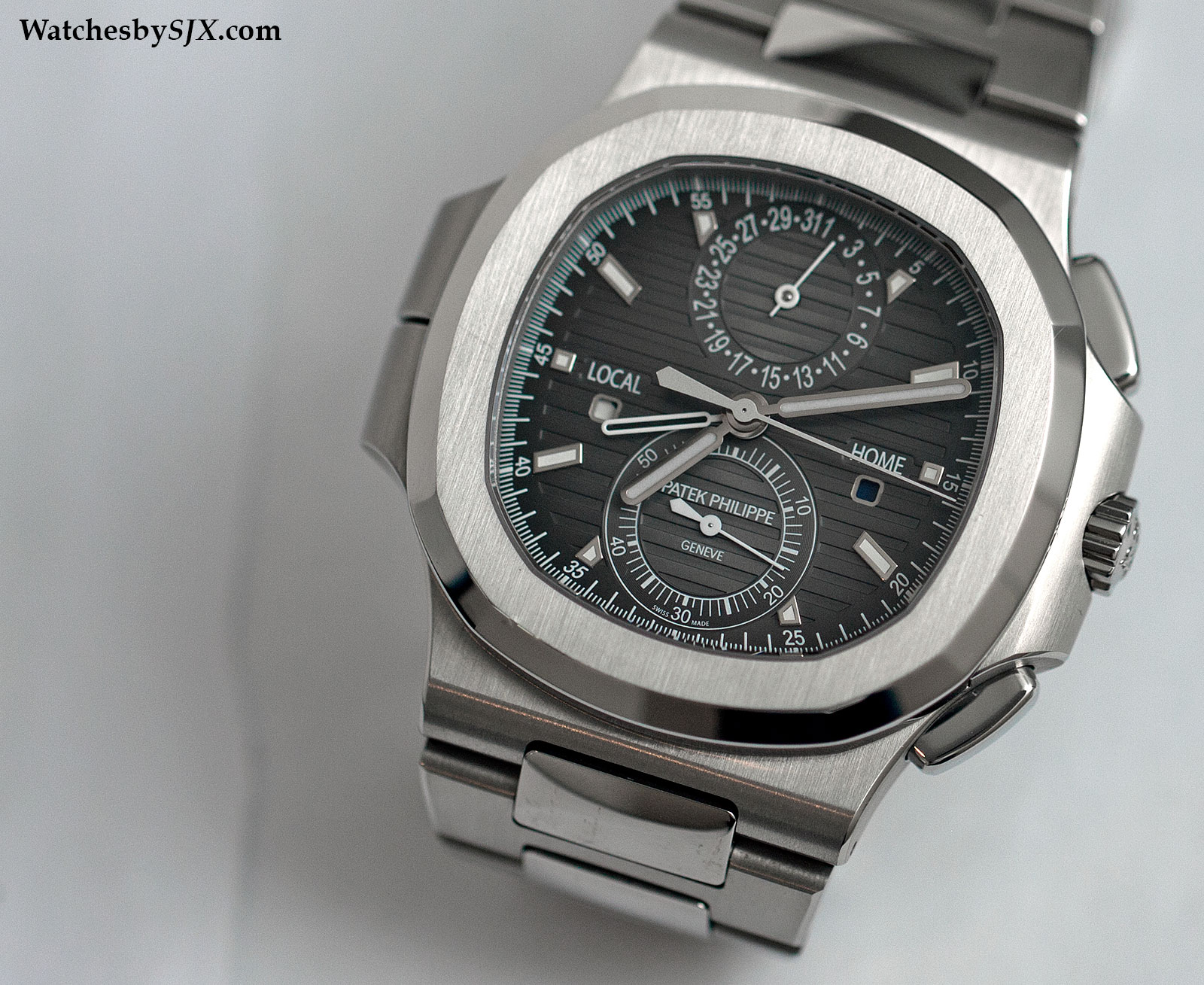 Patek Philippe presented the second generation of its sports chronograph at Baselworld 2014 with the Nautilus Travel Time Ref. 5990/1A. Very similar to the Ref. 5980/1A it replaces, the main difference of the new Nautilus chronograph is an added dual time function, though it also has other less obvious changes.

Despite the differences in function and design, physically the 5990/1A feels the same as its predecessor, for good reason as it is almost exactly the same size. At 40.5 mm in diameter and 12.53 mm high, the new Nautilus is practically identical to the 5980/1A. Interestingly, the 5990/1A is 0.7 mm slimmer, surprising given that it has the added Travel Time function.

A case for the dual time

Unlike earlier generations of the Nautilus wristwatch, the case of the 5990/1A is a conventional, three-part construction with a bezel, case middle and back, allowing Patek Philippe to cleverly camouflaged the buttons for the second time zone in the “ears” of the case. A of the signature of the Gerald Genta-designed case, the ears formed part of the bezel in the original design. As was the habit of Genta (the Royal Oak had a similar construction), the original Nautilus had a one-piece case with the ears of the bezel extending downwards to interlock with the case sides – these were secured in by lateral screws for water-resistance. Though the case construction differs, the new Nautilus is visually identical to the previous generations. The case finish is refined and well done, with well defined edges and surfaces, notably superior to those of the seventies through to the 2000s. That being said, the Nautilus case not quite as complex as that of the Royal Oak, the luxury sports watch that served as the impetus for Patek Philippe to create the Nautilus. The 5990/1A has the same base movement CH28 as the first generation, but with the dual time zone function first used in the Aquanaut Travel Time Ref. 5164A. It is simple to use and read, with two hour hands for each time zone.

The upper hour hand is filled with SuperLuminova and indicates local time. Two buttons at nine o’clock adjust the hour hand, moving it forward or backwards in one hour intervals. Below is the home time hand, which is hidden underneath the local time hour hand when not in use. Day and night indicators for both time zones are on opposite sides of the dial – white for day time and dark blue for night time – giving it a pleasing symmetry. The dial is decorated with a horizontal, embossed guilloche typical of the Nautilus. It is a graduated grey, turning progressively darker towards the edge of the dial. Unlike the 5980 which has a largish date window (the 5980 has been discontinued in steel but remains available in gold), the 5990/1A has a sub-dial for the date at 12 o’clock. While this layout maintains the horizontal and vertical symmetry of the dial, the date is less legible than that displayed in a window. Notably, though the base movement is the same as before, the 5990/1A can only record elapsed times of up to 60 minutes. The 5980 is capable of measuring times of up to 12 hours with both the minute and hour registers concentric in the sub-dial at six o’clock. While the 5990/1A is certainly more legible since there is less clutter in the sub-dial, its functionality is reduced for those who want to measure longer times. Viewed from the back the movement looks the same as on the 5980. The CH 28 is well finished, probably the most attractive decorative movement in a sports chronograph – admittedly a segment without significant high horology competition.

With an integrated chronograph construction, the calibre is certainly more sophisticated than the most obvious competitor to the Nautilus, the Royal Oak Offshore that has a modular chronograph. Additionally, the CH 28-520 C FUS is equipped with the Spiromax silicon hairspring that promises better long term reliability thanks to its non-magnetic and shock resistant properties.

One reason why the 5990/1A feels the same as the 5980/1A is the bracelet, which is unchanged. While it is well finished, with fine brushing and polished bevels on the edges, it is thin, with a simple, friction-fit clasp and stamped safety lock. For a watch as expensive as this the bracelet is quite ordinary in construction.