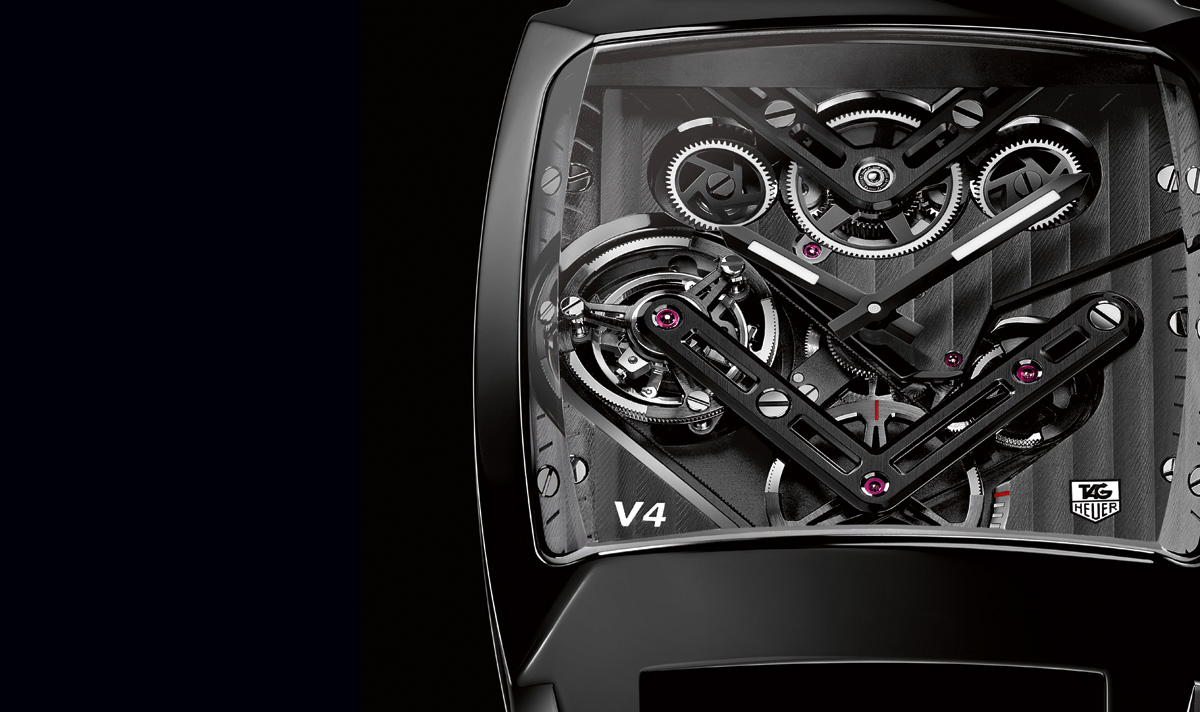 Ten years ago TAG Heuer presented the world’s first belt-driven watch, the Monaco V4. It had tiny belts to transmit the torque from the barrel, instead of conventional gears. It took six years to get to a working, commercially available wristwatch, but TAG Heuer has now integrated a tourbillon into the movement, creating the world’s first belt-driven tourbillon, the Monaco V4 Tourbillon.

With a movement comprised of 214 components, the Monaco V4 Tourbillon extends the belt transmission all the way to the tourbillon, with the tourbillon cage itself connected to a belt that drives it.

Four belts made of an elastic polymer are used in the Monaco V4 Tourbillon, three for the gear train and one to link the barrels. The smallest belt is just 0.07 mm in width, about the width of a hair. The Because of the tension in the belts, there is no play between the gears as in a conventional gear train. This eliminates the backlash present on a regular tourbillon which stems from the meshing of the teeth in its gears, which results in its ever so slightly jerky motion. In contrast, the Monaco V4 Tourbillon rotates smoothly, once a minute, due to the seamless motion of the belt transmission.

Another advantage of the belts is that they are lubrication free. Though a belt transmission has a marginally lower efficiency compared to a well-lubricated gear system at the very start, over time the belt transmission will maintain its efficiency, while a traditional gear-based mechanism will deteriorate due to the break-down of its lubrications.

On the other hand, a belt transmission system requires more numerous and larger gears, resulting in an enormous complex mechanism, which is why the first V4 took years to get from prototype to final product.

Like the original V4, the Monaco V4 Tourbillon is automatic. But instead of a regular oscillating weight, it has a tungsten mass that travels on a linear, double-track rail, moving up and down to wind the watch.

This novel but inefficient mechanism winds four barrels, arranged in pairs, which are each mounted on ball bearings, giving the watch a power reserve of 40 hours. These are set at a gentle incline of 13°, just like the cylinders of a car engine. Baselworld 2014: Presenting the Girard-Perregaux Tri-Axial Tourbillon, the Most Complex Tourbillon Ever from GP (with specs and pricing)