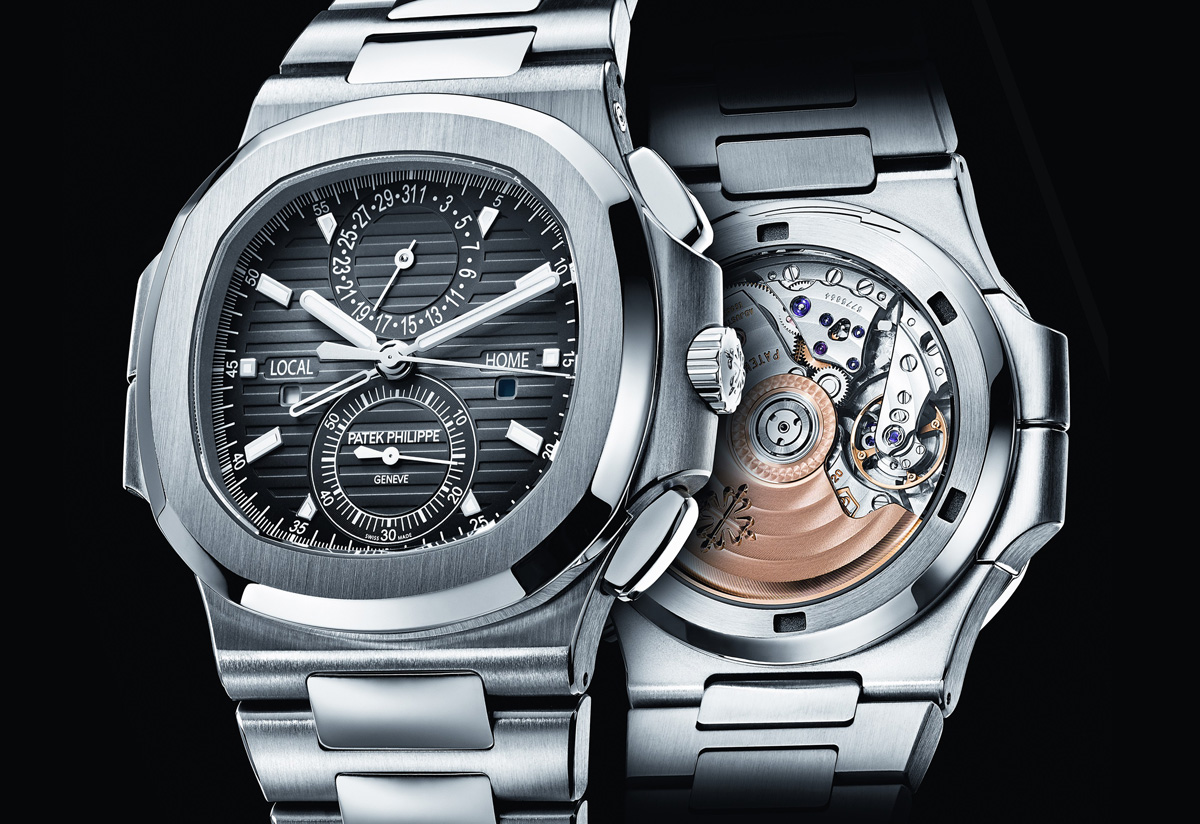 Patek Philippe has just unveiled the second generation of the Nautilus chronograph, the Nautilus Travel Time Chronograph Ref. 5990/1A, featuring both dual time zone function, day and night indicators, as well as a chronograph. A combination of the outgoing Nautilus chronograph and Aquanaut Travel Time, the new Nautilus Travel Time Chronograph Ref. 5990/1A combines both a stopwatch and a dual time zone display. The second new chronograph model Patek Philippe introduced at Baselworld 2014 (the first being the steel ref. 5960/1A), the Nautilus Travel Time Chronograph replaces the current steel Nautilus chronograph ref. 5960/1A, which was introduced in 2007.  Powered by the same base CH28 automatic movement as the first generation, but modified to accommodate the new functions, the ref. 5990/1A has a skeleton second time zone hand which can be adjusted in one hour steps via the two buttons integrated into the case at nine o’clock. When not in use the second time zone hand can be hidden underneath the hour hand. And two tiny windows on at three and nine o’clock indicate day or night for home and local time respectively.

The date is positioned at 12 o’clock, on a circular sub-dial, which is balanced by the 60 minute counter at six o’clock. The layout of the dial gives it a very tidy symmetry. Notably, though the Nautilus case remains visually identical as past generations, the case construction has changed. Earlier Nautilus cases had a unique case construction that was the reason for the signature protruding “ears” on both sides of the case.  They were actually part of the bezel, which that protruded downwards on each side of the case, forming the twin flanks that interlocked with the case sides, which were then secured by lateral screws. In contrast, the new Nautilus has a conventional three part case with a bezel, case middle and back, a necessity stemming from the pushers for the travel time. Water resistance remains 120 m, as has been the case (no pun intended) for successive generations of Nautilus watches.

The new Caliber CH 28-520 C FUS movement has a 55 hour power reserve, and is equipped with the adjustable mas Gyromax balance, as well as the Spiromax silicon hairspring. Baselworld 2014: Introducing the Patek Philippe Ref. 5960/1A in Steel with a Matching Bracelet (with specs and price)