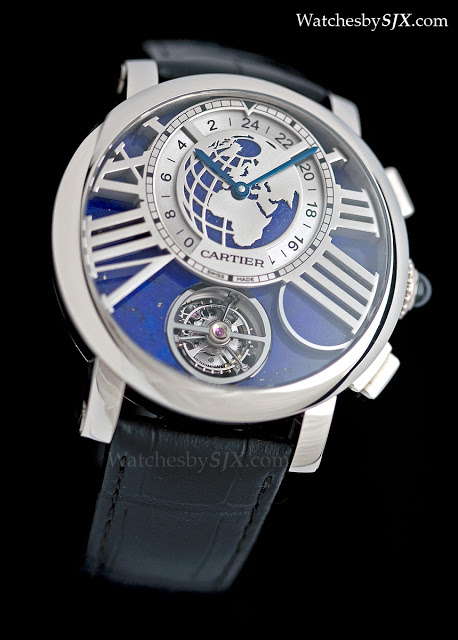 Whereas most new moon phase mechanisms are improvements in the accuracy of the moon phase, typically achieved by using gears with more teeth, Carole Forestier’s goal in developing this calibre was to offer an alternative to the traditional moon phase display.  Forestier, Cartier’s head of technical development, has a knack for creatively re-imagining conventional complications, with the new Astrocalendar being one example. In the Rotonde de Cartier Earth and Moon, the moon phase display is hidden, until called upon by means of a pusher at four o’clock. The aperture for the tourbillon functions as the moon disc, while the shadow of the moon is hidden underneath the dial at four o’clock. The pusher at four brings out the moon phase disc, which stops above the tourbillon, thus indicating the age of the moon.

Once the pusher is released, the moon disc hovers for a moment before sliding back into the recess under the dial. A damping mechanism ensures the moon disc travels swiftly yet smoothly.

The moon phase mechanism here comprises two parts, the first being the conventional moon phase mechanism with wheels, and the second being the memory component, which remembers the current age of the moon and then displays it on demand. Not unlike a chronograph mechanism, the moon memory relies on a cam to ensure the moon disc stops at the right point.

The moon phase is accurate to a day in 126 years, which is comparable to the informal industry standard of a day in 122.5 years. In addition to the moon phase, the watch also has a second time zone, indicated by a pointer at 12 o’clock. This is advanced in one hour increments by the pusher at two. Centred on an open-worked globe (hence the name Earth and Moon), the time display and second time zone are on the upper layer of the two level dial. Also on the upper layer are the oversized, skeletonised Roman numerals made of white gold and finished with a brushed top and bevelled edges. It is beneath the “IIII” that the moon phase disc resides when not in use. Below the Roman numerals is the lapis lazuli dial, in a rich blue colour flecked with gold. The decision to use lapis lazuli for the dial, and also the moon phase disc, was partly historical – Cartier used the stone extensively in its lavish clocks of the twenties and thirties. Comprising 362 parts, the 9440 MC movement is manual wind and has a three day power reserve. Like a few other complications from Cartier, the movement is manufactured by Renaud & Papi, which guarantees a high level of quality and robustness (and price) matched by few independent movement specialists. The bridges of the movement are open-worked in a radial motif, bringing to mind stars and comets. They feature a brushed finish on top and prominent, polished bevels all round, a style of decoration common in many Cartier Fine Watchmaking timepieces. Below the skeleton bridges the finish is similarly monochromatic and equally fine, all the wheels are circular grained, and where necessary the spokes and rims are bevelled and polished. At 47 mm wide with a platinum case, the Rotonde de Cartier Earth and Moon is a large and hefty watch. Combined with the blue dial, the watch is almost ostentatious in its appearance, which is atypical for Cartier. But that is not necessarily a bad thing, since most Cartier watches stick to a tried and tested design formula. This successfully departs from the norm. The Rotonde de Cartier Earth and Moon is a limited edition of 50 numbered pieces with a retail price of €230,000 before taxes (~US$315,000). An additional 10 pieces will be made with baguette diamonds on the case and bezel, with a price tag of €490,000 (~US$671,000). – SJX Hands-on with the Rotonde de Cartier Tourbillon Chronograph, Equipped with a Renaud & Papi Movement (with live photos and pricing)

Presented at SIHH 2014, the Rotonde de Cartier Tourbillon Chronograph is powered by an impressive movement from Renaud & Papi with an eight day power reserve.