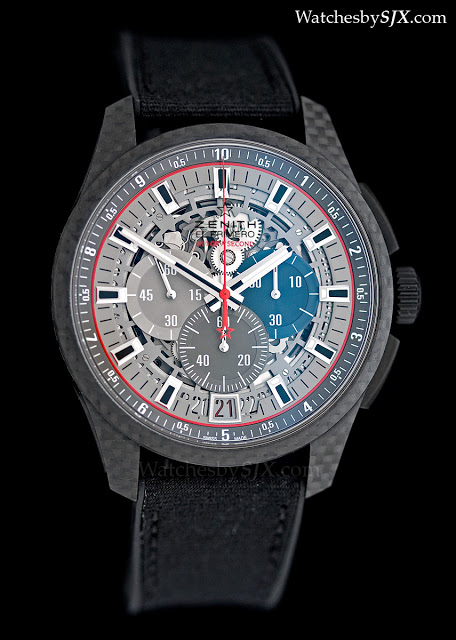 The title of the light automatic chronograph in the world now belongs to Zenith, with its new El Primero Lightweight. Cased in aluminium and carbon fibre, the major components of the El Primero movement are all titanium. Zenith recently announced its entry into the world of ultra-light sports watches, the El Primero Lightweight. The use of aluminium, carbon fibre and titanium has shaved off the ounces, giving the watch head a weight of 42.68 g. Despite its diameter of 45 mm, the case is feather light. It is composed primarily of two materials: ceramised aluminium and carbon fibre (or more accurately carbon fibre reinforced polymer).  Ceramised aluminium is basically aluminium with a thin ceramic coating, created by subjecting the aluminium to an electrochemical surface treatment which creates an oxide coating on the metal. This is similar to the material Panerai terms composite. The inner case and basic structure of the outer case is made of ceramised aluminium, and then carbon fibre is layered on the outside. And the lugs are hollowed out, to reduce the material necessary to the bare minimum. In addition to the aluminium and ceramic case body, the bezel and case back of the El Primero Lightweight are carbon fibre, while the crown and pushers are PVD coated titanium. Similarly, the movement has been modified to minimise its weight. All the large components of the movement, namely the bridges and the base plate, are made of titanium, not a common material for movements. Like other Zenith watches the movement is finished, but not elaborately so, with the titanium parts being evenly sandblasted and the steel chronograph levers brushed. And the chronograph wheel, escape wheel and pallet fork are in silicon (though this is the case for the regular Striking 10th movements as well). The result is a movement which weighs about a quarter less than the regular version, weighing in at 15.45 g.

The movement is no ordinary El Primero, instead this is a variant of the Striking 10th calibre which measures up to a tenth of a second.  The central red seconds hand makes one revolution every 10 seconds, a feat possible thanks to the 36,000 bph of the escapement. That frequency translates into 10 oscillations per second (36,000 per hour, 600 per minute and 10 per second). Though the El Primero is still highly regarded, and rightly so, some 44 years after its introduction, it lacks much of the technology available in rival movements. Zenith has done a superb job in rejuvenating the calibre, but at heart it is still an old workhorse. Weight too has been shaved off the dial, with most of it removed, leaving just the chronograph sub-dials and chapter ring. Even the date disc is open-worked. But the dial still retains the classic Zenith aesthetic, with the tri-colour sub-dials. Though attractive and distinctive, the sub-dials overlap, which means they cannot be read at certain times. The blue seconds sub-dial for example is obscured between 30 and 45 seconds. Zenith fixed that problem with the new Rainbow chronograph, but unfortunately it is still apparent here. In terms of weight the Zenith is middle of the pack. At just over 40 g sans strap, and nearly 74 g with the Nomex-covered rubber strap, it is heavier than the 55 g F. P. Journe Centigraphe Sport and it cannot hold a feather to the featherweight Richard Mille RM027-01 which weighs just 13 g without the band.  But as ultra-light watches go, the Zenith is modest. Retailing for US$22,000 in the United States and S$27,300 in Singapore with 7% tax, it is a fraction of the competition. The El Primero Lightweight is a limited edition of 100 pieces. – SJX