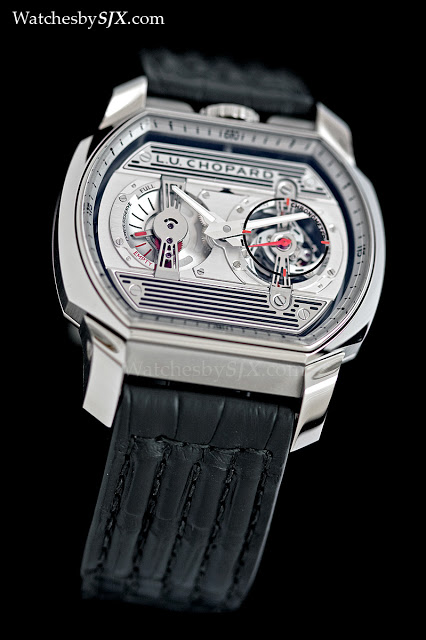 Just unveiled at Baselworld 2013, the Chopard LUC Engine One H tourbillon is inspired by automobiles, and undoubtedly the coolest LUC watch ever. Cool is an adjective rarely applied to Chopard LUC watches. They are typically fine, well-finished, and often staid, even boring. The LUC Engine One H tourbillon is a striking departure from the norm and it thoroughly deserves the title. Two years ago Chopard tried its hand at a cool, car-inspired watch, resulting in the Engine One. Fortunately, Chopard tried once again, and this time they succeeded. The Engine One H uses the same movement as its predecessor, but rotated counter-clockwise. This gives the Engine One H is a more distinctive character, as well as greater wrist presence. The titanium case is also well made and finished. Chopard has done justice to a relatively complex case, especially with the curve of the lugs. Though the Engine One H is not extremely large, measuring a moderate 44.5 mm wide and 35 mm long, the thick, sculpted lugs give it a sense of purpose. And because the watch is in titanium, it is lightweight and comfortable. Across at nine o’clock is the power reserve indicator, styled like a fuel indicator on a dashboard, reading “Full” and “Empty”. The power reserve display is concave, which together with the aperture for the tourbillon, gives the dial depth. Because of the automotive theme of the watch, the movement is suspended in the case by three struts, which from some angles leaves it seemingly floating inside the case. This is more evident from the back, where the three supports holding the movement are visible, and the gap between the movement and case is apparent. Notably, the movement finishing is good, but inconsistent, which is unusual for a Chopard LUC watch, which typically demonstrate exemplary finishing. For example, the bridges visible from the back have well bevelled edges – polished and rounded as they should be – but the raised and grooved portions of the bridges are less carefully finished. But overall this still earns high marks for its fit and finish. 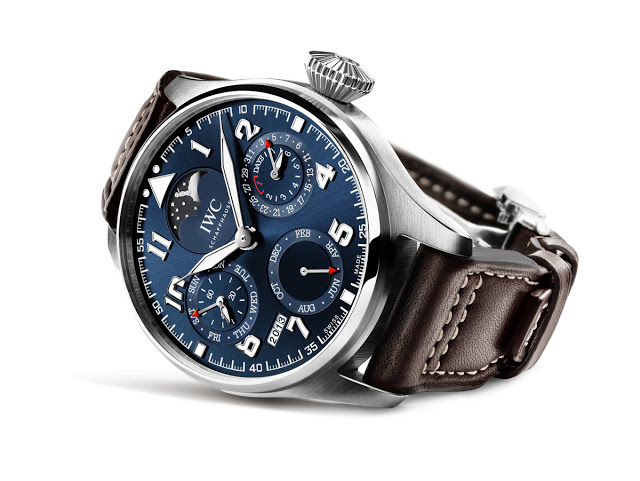 A unique IWC Big Pilot’s Perpetual Calendar Edition “Le Petit Prince” will be sold by Sotheby’s in Geneva, with going to funding construction of a school in Cambodia. IWC has created a one-of-a-kind Big Pilot’s Perpetual Calendar Edition “Le Petit Prince” in platinum for charity. The regular version of this watch is available in rose gold as a limited edition. The Big Pilot’s Perpetual Calendar Edition “Le Petit Prince” was created to mark the 70th anniversary of “The Little Prince”, the tale penned by author and aviator Antoine de Saint-Exupéry.  It has a midnight blue dial with a classic moon phase display in an aperture, the first time IWC has used this for a pilot’s watch. The movement inside is the automatic cal. 5000 seven day power reserve that is arguably IWC’s most accomplished calibre. Its rotor is set with a solid gold medallion depicting Saint-Exupéry character from the novel and engraved with “Unique Piece”. Along with the watch, the auction lot includes a limited edition reprint of the first English edition of “The Little Prince”, as well as a reproduction of the original French manuscript.

This unique platinum version of the watch will be sold by Sotheby’s at its auction in Geneva on 12 November 2013. The suggested retail price is SFr78,000 (~US$86,900). All proceeds from the sale of this timepiece will fund the construction of a school with a library in Cambodia. – SJX