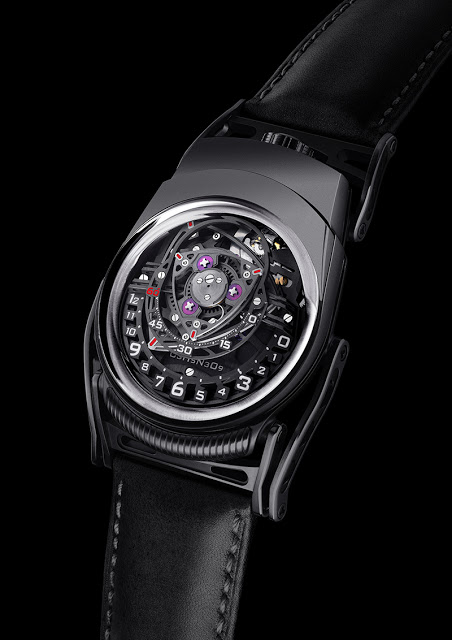 C3H5N3O9, otherwise known as nitroglycerin, a joint venture of MB&F and Urwerk, has just presented their second watch, the Experiment ZR012 Black. Last year MB&F and Urwerk took the covers off the ZR012, made under the label C3H5N3O9, which is the chemical formula for nitroglycerin. The watch was the result of MB&F taking care of the aesthetics (specifically, Eric Giroud penned the design) and Urwerk the movement. This year sees the launch of the second installment in the series, the ZR012 in black PVD coated zirconium. Unusually, the ZR012 was a striking timepiece sold exclusively online. But for their second watch, the partners have notably decided to go the traditional route – the ZR012 in black is available only at Singapore retailer The Hour Glass. The specs remain exactly the same as the first ZR012. As before, the time display is inspired by a Wankel engine, and the zirconium case measures 55 mm by 44 mm.