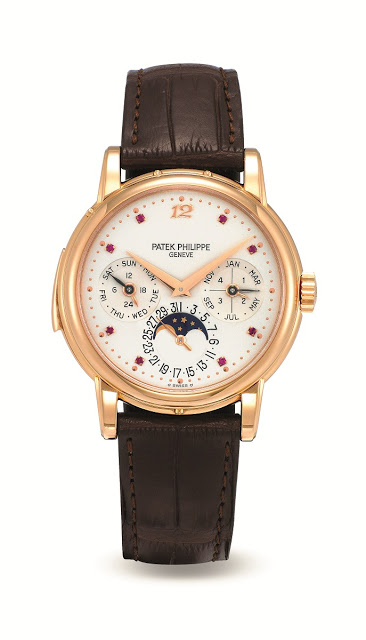 For its inaugural sale on Mainland China on 26 September, Christie’s has assembled a small but significant and entirely unique range of wristwatches, including a quartet of special Patek Philippe grand complications, and amongst them one-of-a-kind versions of the ref. 3939 as well as ref. 5016.

A few months ago Christie’s became the first Western auction house to secure the license to operate independently on the Chinese mainland. Its first auction in China will take place in Shanghai next week, with a mixture of paintings, wine and watches. A dozen watches will go under the hammer, including several unique Patek Philippes and a rare Cartier Crash with a burgundy dial. Though the Patek watches on offer include enamelled pocket watches and a cloisonne dial ref. 2481, the highlight of the sale is undoubtedly the four grand complications – comprising the refs. 3939, 3974, 5004 and 5016 – with matching, ruby-set silver dials and pink gold cases, presumably from the same owner. The first is the ref. 5004R split-seconds chronograph with perpetual calendar, with this particular specimen being only the second known piece with the ruby dial. CNY2,200,000 to CNY3,400,000 (~US$363,113 to US$561,174) is the estimate.

Another notable watch from the sale is the platinum Cartier Crash with a burgundy dial, estimated at CNY190,000 to CNY320,000 (~US$31,360 to US$52,816). Platinum is the rarest metal for this signature Cartier wristwatch, and the dial is a special order (the typical colour is silver). The auction will take place on 26 September 2013 and full sale information can be had from Christie’s. – SJX