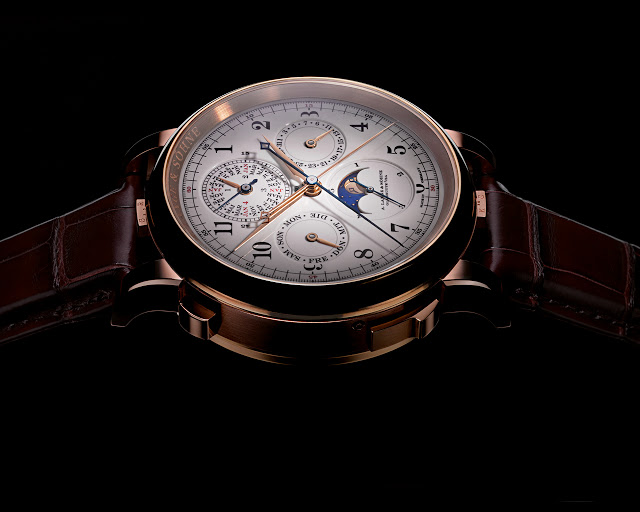 Announced but not publicly shown at SIHH 2013, the watch has a grand and petite sonnerie, minute repeater, a chronograph with rattrapante as well as lightning seconds and a perpetual calendar. It measures 50 mm – making it a pocket watch on a strap for all intents and purposes – and costs over €1.9 million.

Lange recently released a short interview with Anthony de Haas, the Dutchman who heads the brand’s movement development. In this interesting, enlightening as well as a tiny bit hyperbolic at times, piece, de Haas explains the background of the Lange Grand Complication.

What does the Grand Complication mean for A. Lange & Söhne?

With the development of the most complicated wristwatch ever built by A. Lange & Söhne – and in Germany – we entered uncharted territory in the domain of horology. The unique combination of seven, some very rare, complications is not only a tribute to the tradition of our brand, but marks above all the beginning of a new era in the history of A. Lange & Söhne. The building of this multiple complication with the most complex of chiming mechanisms that bears the distinctive signature of our unique Saxon watchmaking culture has expanded our knowledge and released a lot of creativity. It is not an exaggeration to say that this project has opened the gate to many new ideas and designs.

What was the biggest challenge in the development of the Grand Complication?

The project was an adventurous expedition into the universe of complexity where danger lurks on every corner. It imposed extreme requirements on the perfect interaction of many intricate mechanisms and hundreds of parts. To give an example, we had to avoid any loss of amplitude when at midnight all indications of the perpetual calendar are switching and the grande sonnerie is striking simultaneously. We succeeded in mastering this challenge and have even made it possible for the owner of the timepiece to operate the rattrapante mechanism at the same time.

What is required of watchmakers to assemble the movement of the Grand Complication and how long does it take them?

Assembly must adhere to exacting requirements in terms of precision and the perfect inter-action of intricate mechanisms. Only the most talented and experienced watchmakers will be able to master the challenges associated with assembling the movement and its 876 parts. Even the most experienced watchmakers will take about a year to accomplish the mission. It requires the highest level of concentration, experience and sensitivity – and a lot of patience. What happens during this rather long period of assembly?

The assembly time of one year includes above all elaborate and comprehensive test procedures. For example, the chiming mechanism is monitored day and night. In turn, this recording has to be evaluated to check whether the mechanism has been chiming correctly every single quarter. If not, it has to be dismantled, adjusted, assembled and checked again to see if it is functioning properly. ‘Free, with no shake’ is the mantra that governs the interplay between the moving parts of a chiming mechanism. Why did you choose 2013 to present this fundamental piece in the history of the manufactory?

This year is dedicated to our horological heritage. ‘Unique by tradition’ is the theme we have chosen for 2013. By tradition, A. Lange & Söhne is a unique brand that follows its own path and in doing so constantly tries to outperform its own achievements. The Grand Complication is the perfect embodiment of this idea. [Editor’s note: With 2014 being the 175th anniversary of Patek Philippe, speculation is that the Geneva brand will present a highly complicated timepiece next year.]

What is the message that A. Lange & Söhne is sending with the Grand Complication?

More than any other watch ever built by A. Lange & Söhne the Grand Complication manifests the endeavour of our product developers and master watchmakers to ex-tend the boundaries of fine mechanical watchmaking. And what is more, it contains a promise to our collectors: our ambition to never stand still will keep us committed to enriching the world of fine watch-making with meaningful contributions.

After the Grand Complication, what can we expect from A. Lange & Söhne in the future?

As a matter of principle, we do not comment on future developments. However, we are constantly working on a number of product development projects. There is an unrelenting demand for timepieces with sophisticated complications. We have responded to this trend in the past two decades with many exciting developments and we will have attractive new products to address it in the future. In other words: we will continue our product policy of watchmaking excellence and unmatched craftsmanship.

How does the Grand Complication compare to the pocket watch No. 42500 that Lange presented three years ago?

The Grand Complication is an independent development that opens new gates as regards technical and manual demands. The technical highlights are inspired by the tradition of horological complications that A. Lange & Söhne took to new levels in the late 19th and early 20th century. The pocket watch No. 42500 is perhaps the most prominent and sophisticated example. The know-how acquired during its restoration provided valuable insights and sparked new impulses. The same holds true for the development of the Grand Complication. [Editor’s note: A pocket watch with serial no. 42500 was a vintage, early twentieth century grand complication pocket watch (with movement based on a Swiss ebauche) which Lange restored in 2010. Subsequently Lange published a small book about the watch and the restoration process.]

How does the Grand Complication command its price of almost two million euros?

Looking at the price one has to bear in mind that it took our product developers seven years to master all of the technical challenges involved in the design of this exceptional timepiece and that the entire series consists of six pieces only. Is it true that all six pieces have been sold?

It is true that the number of serious A. Lange & Söhne collectors interested in the watch is higher than the supply. But it has not been decided yet which of the potential buyers will eventually receive one. Unfortunately, we cannot produce more Grand Complications as it would tie up capacities that we need for our new projects.