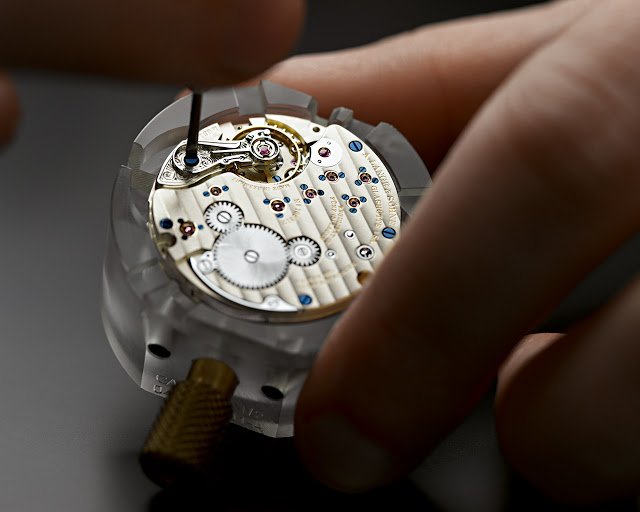 Lange has just issued a press release covering the new 1815 Up/Down (which we covered in detail recently), detailing what have now become the signature elements of Lange movements. None of these elements are in themselves particular to German watchmaking or Lange, but combined they are regarded as characteristically Lange because of the shrewd decision to use them when Lange was revived in 1994.

Most of these movement elements hark back to 19th century watchmaking, beginning with the English and then adopted by the Germans, but are now produced with 21st century technology, and finished carefully by hand. The result is a peculiar yet gorgeous movement. Here we explain the those elements which have become Lange hallmarks, illustrated with the beautiful photographs from Lange Uhren.

The three-quarter plate in German silver – Probably the most old fashioned way of constructing a movement, the three-quarter plate evolved from the full plate movement, in which the whole movement was covered and the balance wheel sat on top of it.  This style of construction was copied from English watchmaking, which Ferdinand Adolph Lange took as the template when he founded the watchmaking industry in Glashütte in the 19th century, when English watchmakers were dominant.

Because the going train must be positioned below on the base plate and then the three-quater plate must be fitted perfectly so each pivot rests in the upper bearing, a three quarter plate is harder to assemble than a bridge movement. But because it has one, rather than multiple bridges, it is easier to finish.  Interesting, vintage Lange pocket watches had frosted, gilt movements, instead of the uncoated German silver used today which gives the movements their distinctive hue. German silver, or nickel silver, looks much luxurious than gilt, which has a quiet, plain appearance.

Likewise the swan neck regulator is also taken from vintage pocket watches. But it is more aesthetic than functional, since regulation is largely done by adjusting the length of the hairspring, though the swan neck can be used for minor adjustments of the same. Finer adjustment is done by tweaking the adjustable weights on the balance wheel, or if the balance wheel is the simpler Glucydur balance then a laser will be used to poise it by removing bits from the underside.

Screwed balance – While on earlier Lange movements the balance screws were purely for aesthetics, to recreate the look of old pocket watches (as described above a laser is used to poise the balance), on the new 1815 Up/Down four of the screws are adjustable and used to regulate the watch.

And the top-end Lange movements now use the in-house balance wheel with adjustable weights on the inside of the balance instead of screws, which allow for a larger balance and more precise adjustment.

Blued screws – Blued by a small flame at about 300 degrees Celsius, these screws turn a rich shade of blue.

Explaining How Hairsprings are Made at A. Lange & Söhne

One of the most interesting processes at the Lange factory in Glashütte is the manufacture of hairsprings, a surprisingly labour intensive process for a small and seemingly simple part. Lange is one of only a handful of brands which are able to manufacture their own hairsprings.