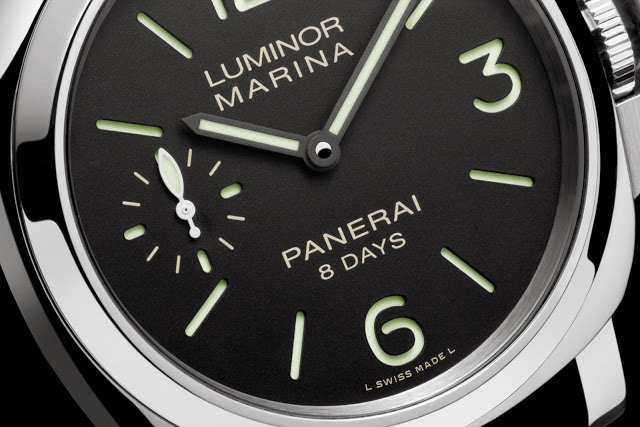 In addition to the Submersible heavy SIHH collection, another new model for 2013 is the Panerai Luminor Marina 8 Days 44 mm. Model numbers are PAM510 in steel and PAM511 in Oro Rosso or red gold, both of which have the same 44 mm Luminor case. This pair of manual wind watches join the Luminor 1950 PAM523 launched just a few months ago, which is the new entry level in-house automatic.

Most notable is the P.5000 movement inside. This is the first 44 mm Luminor I can think of with an in-house movement.

A Unitas replacement with a diameter of 15 3/4 ‘”, the P.5000 has eight days of power reserve thanks to twin barrels which unwind in series.

And the P.5000 has a three-quarter plate which covers the entire movement, save for a cut-out which reveals the centre wheel.

Both models have sandwich dials (luminous plate below and dial with cut-outs for the numbers above): black for the PAM510, while the PAM511 has a brown dial to match the red gold case. The PAM510 in particular marks a new price point for Panerai, never before has the brand made an in-house movement this accessible. This is only slightly more than the Unitas powered Panerai watches, which makes it a more compelling proposition. Conversely it makes the higher-end models seem pricey.