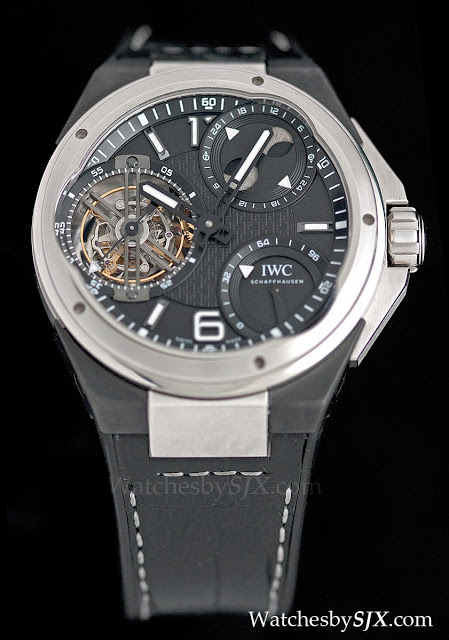 Originally a simple timepiece designed with engineers in mind, hence the name and the amagnetic properties of the earlier models. But this year IWC gave the line a reboot, and at the very top of the collection is the Ingenieur Constant-Force Tourbillon.

This is equipped with the tourbillon first seen in the even more complicated Portuguese Sidérale Scafusia, which is no ordinary tourbillon. It has a compact and clever constant force mechanism integrated into the tourbillon carriage. For the half of the 96 hour power reserve, the tourbillon rotates in one second increments, much like a dead seconds, thanks to the constant force mechanism. But once it reaches the halfway mark at about 48 hours, or two days, the constant force mechanism disengages and the tourbillon cage starts turning in 1/5 second intervals like a conventional tourbillon. Besides the tourbillon, the watch also has a power display at four o’clock, and IWC’s signature double hemisphere moon phase at two o’clock. Notice the texture of the moon disc that is modelled on the actual surface of the moon, complete with craters. And because the Ingenieur line has been reimagined as an automotive, rather than engineer-centric, watch, the movement of the Ingenieur Constant-Force Tourbillon is modelled after an engine block. This is visible through the display back – which means the watch is not amagnetic –  and though the bridges are laid out in an attractive manner, the finishing is efficient and clean. The 46 mm case is black ceramic, with the bezel, crown, crown guards, lugs and case back in platinum, giving this significant heft. It will not go unnoticed on the wrist.