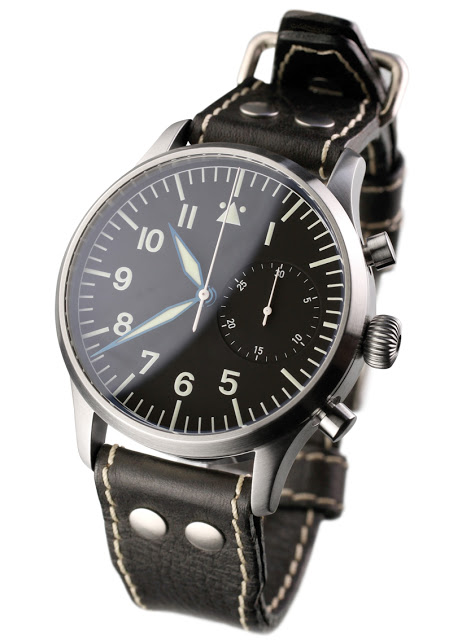 Stowa now offers hand-wound versions of its Flieger and Marine Chronos, using a modified version of the Valjoux 7753. Two years ago Stowa unveiled its minimalist Flieger Chronograph with an automatic movement, which only had two hands for the chronograph and another two for the time. Now Stowa has added a manual wind version of the Flieger Chrono, which is more in keeping with its bare essentials philosophy. The new manually wound Flieger Chrono uses a Valjoux 7753 movement modified by Stowa. The automatic winding mechanism is removed, and the bridge is customised with the Stowa logo in relief. The case remains the same as the automatic, at 41 mm wide but the slimmer movement means the case back is thinner. So the hand-wind version is 1 mm slimmer at 13.7 mm high. This retails for €1638.66 without VAT (or about US$2150), compared to €1386.55 for the automatic. The same manual wind movement is also used for the new Marine Chronograph hand-wound, which retails for €1680.67. Like the Flieger the Marine Chronograph was previously only available as an automatic. – SJX