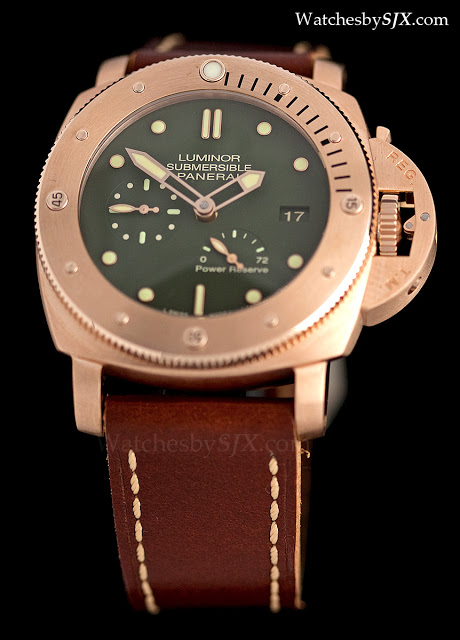 Two years ago Panerai unveiled the first Bronzo, the PAM382 Submersible. As expected for a Panerai with a unusual case material, demand was tremendous and outstripped supply. Unsurprisingly, Panerai has used the same marine bronze alloy once again for the Luminor Submersible Power Reserve Bronzo PAM507, which was launched at SIHH 2013. The new Bronzo PAM507 is nearly identical to its predecessors. The case is identical to the PAM382, a 47 mm, bronze Submersible case with unidirectional bezel. The most obvious change is the power reserve indicator at four o’clock. Also different is the case back lettering. The engraved text is now filled with gold, while previously it was untreated. The strap too is different from the earlier Bronzo, though that is probably only notable for die-hard Paneristi. Inside is the P.9002 movement with three days power reserve. The Bronzo pictured here is the prototype shown at SIHH. Being relatively new it still retains the bright, copper colour. A mild patina will quickly appear after a month, though it will still look largely similar in colour. Several months later the colour will have dulled significantly, and if the watch is used heavily and exposed to seawater it will look will a relic from a shipwreck.