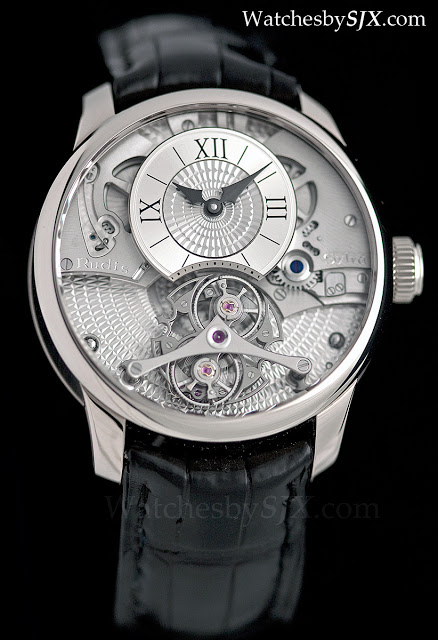 Rudis Sylva is a small independent brand that has one unusual product, the Harmonious Oscillator, most recently presented as the RS12 Grand Art Horloger.

The premise of the Harmonious Oscillator is simple: better timekeeping through resonance. But unlike the FP Journe Resonance which in theory operates through resonance in the small volume of air inside the watch case, the Rudis Sylva Harmonious Oscillator works on physical resonance. That because the balance wheels both have teeth on their rims, and importantly, they touch one another. In fact, one balance wheel drives the other. One balance wheel is linked to an escapement, and it provides the impulse to oscillate the other balance wheel. Each hairspring breathes in the opposite manner to the other, so when one is open, the other is closed. The result of that is each balance wheel averages out the error of the other, which results in a very flat timing curve. Furthermore the pair of balance wheels is mounted on a one minute rotating carriage, which means gravity-induced errors in the vertical position are eliminated as well, as in a tourbillon. In theory that is how it works; I do not know how the Harmonious Oscillator compares to the myriad other novel ideas – JLC Gyrotourbillon, Cartier Astroregulateur, Zenith Christophe Colomb, just to name a handful – that all offer solutions to the same problem. Nevertheless the latest version of the Harmonious Oscillator, the RS12 Grand Art Horloger is a beautifully executed timepiece. The finishing of all components is top rate. Naturally the twin balances and bridge feature prominently on the dial, and all of it is wonderfully decorated. Especially notable is the titanium, shuriken-shaped cage for the two balance wheels, with its razor sharp corners and beautiful anglage. In fact, the titanium cage has 28 sharply bevelled, inward angles. Achieving such a finish on titanium, which is harder to finish than steel, is quite an achievement. In addition to the usual movement finishing techniques, the RS12 also utilises other traditional metal decoration like guilloche, enamelling and hand engraving. Each of these is used in a subtle manner, rather than being plastered all over the watch as is often the case. Most of the movement components are made in-house, save for bits like the jewels, hairspring and escapement, because one of the Rudis Sylva’s shareholders also owns Swiss Finest SA, a component machining specialist. The brand’s other shareholder, Jacky Epitaux, is also its founder. Epitaux was formerly an executive at Zenith in its pre-LVMH days, and subsequently ran Rodolphe. After Rodolphe was sold to Franck Muller Watchland, he founded Rudis Sylva and based it in his hometown of Les Bois, where the firm derived its name. Rudis Sylva means “Rudi’s forest” in Latin, because Les Bois was founded by a farmer named Ruedin, some 600 years ago. This is a hefty watch – the case is 44 mm, and available in white or red gold. Note that the watch pictured here is a prototype, and the production pieces will have contrast colour dials as below.