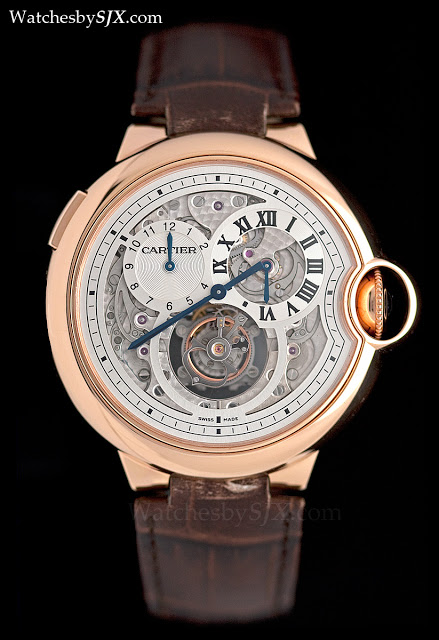 The most notable of the SIHH 2013 watches previewed by Cartier so far is without a doubt the Ballon Bleu de Cartier Tourbillon Double Jumping Time Zones. As the name implies, this is a flying tourbillon with twin, jump hour time zones.

Laid out in a regulator format, the dial is skeletonised, revealing the double jump hour mechanisms of racks, snails and springs. The calibre has the Geneva Seal and is finished appropriately. All of the wonderful anglage and perlage on the dial side is visible. The double jump hour module was added to the flying tourbillon movement (based on a Roger Dubuis calibre). Because of the thickness of the jump hour module, the tourbillon had to be raised by several millimetres in order to bring it level with the dial. Over on the back, however, the base movement looks inappropriately small inside the 46 mm case. The second time zone is advanced by the pusher at ten o’clock. One shortcoming of this as a travel watch is the lack of a day and night indicator for the home time. According to Carole Forestier, the decision to leave out the day and night display was to leave the dial free of clutter, so as to reveal as much of the mechanism as possible. Though that comes at the expense of practicality, the movement is indeed beautiful. This is limited to 50 pieces each in pink and white gold, with an expected retail price of about EUR90,000 and EUR96,300 respectively. A discussion on this watch can be seen on the Cartier forum. I moderate. – SJX