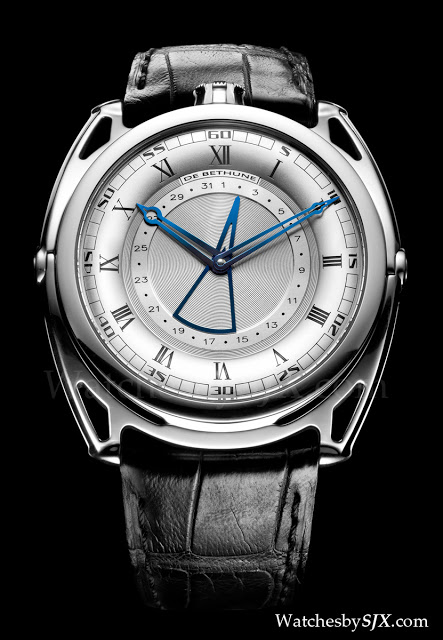 ﻿I saw this in Geneva when I visited De Bethune during SIHH but could not reveal it until now. De Bethune will officially present the DB27 Titan Hawk at Baselworld in a few days. This will be the brand’s entry level model, with a price of around CHF40,000, according to what David Zanetta told me in January.

Despite being more accessibly priced, the DB27 has an in-house calibre with several of De Bethune’s patented features.  The automatic S233 movement includes twins barrels with ruby plates inside the barrel to minimise friction, a silicon and white gold balance wheel, triple pare-chute shock-absorbing bridge for the balance, and a silicon escape wheel. The balance wheel is visible through a porthole in the case back. The dial centre is decorated with an ultra-fine concentric guilloche used on the Dream Watch 3 Tourbillon, and the hands are blued steel in the De Bethune style. The polished titanium case is 43 mm with De Bethune’s signature, spring-loaded floating lugs.

This is a beautifully executed watch and remains true to De Bethune’s standards of quality. It lacks the sleekness of the brand’s space-age designs like the DB28T Tourbillon, or the sheer watchmaking prowess of the DB25T Dead Seconds Tourbillon. But at this price point, which is about half the next most affordable De Bethune, it is a very compelling product.