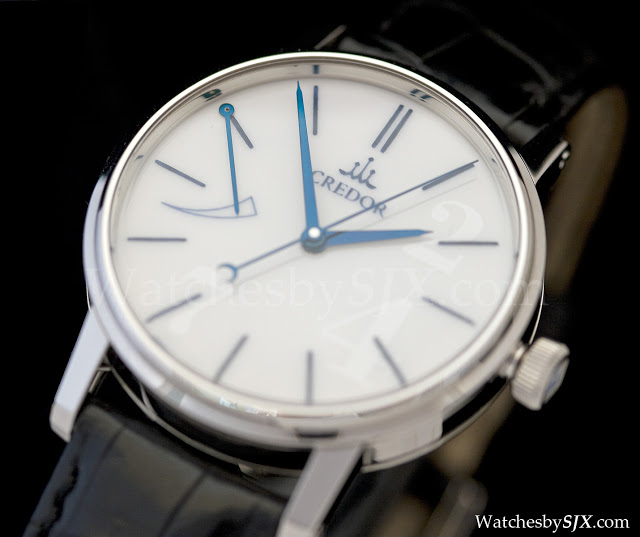 The idea for the Eichi was first put forward by Osamu Takahashi, manager of Seiko Epson’s Micro Artist Studio. Where Grand Seiko is a high-quality everyday watch, the products of the Micro Artist Studio, like the Credor Sonnerie of 2006 and the repeater of 2011, are extraordinary haute horlogerie, the very best quality products that Seiko can produce, at any price. Naturally that means the watches are extraordinary.

Takahashi-san wanted to create an exceptionally high-quality watch, an “heirloom” that can be “worn for generations”, in his words. He was inspired by the Seiko Lord Marvel, a Seiko wristwatch from the sixties that was the brand’s premium product at the time. His Lord Marvel still runs well, decades later. That is why the platinum case of the Eichi is just 35 mm in diameter, just like the Lord Marvel.

On its face the Eichi is a disarmingly simple watch. The dial is clean and shows only the time, as well as a simple power reserve. And at certain angles the numerals 2, 4 and 7 are visible. That is a signature design of the Credor line, an obvious reference to 24 hours and seven days a week. A pure, fragile white is the best description of the dial. It is porcelain by Noritake, the maker of fine bone china that supplies Japan’s imperial household. In contrast to the whiteness of the dial are the hand-painted indices and text, and the blued steel hands. The sheer white of the dial is a nod to the snow that blankets Shiojiri, where the Seiko Epson factory is located. There is also a tiny porcelain insert on the crown with the Credor logo. But what is truly exceptional about the Eichi is the 7R08 calibre. The level of finishing on the watch is outstanding.

(Note the photos show a prototype stored in the Micro Artist Studio so it is not as clean as an actual production piece.) Kenji Shiohara from the Micro Artist Studio sought out Philippe Dufour for advice on watch finishing when the Spring Drive Sonnerie was in development. And in typical Japanese fashion they took the advice and went even further. In a conversation with Mr Dufour a year ago, he expressed respect for Seiko’s fanatical dedication to quality.

Everything in the movement is finished to a near obsessive level. Even the interior of the barrel is polished to a mirror finish to minimise friction and wear, something I have never come across, even in other ultra-high end watches.

The dedication to finishing is illustrated by the fact that when the watchmakers from the Micro Artist Studio returned from visiting Mr Dufour, they brought back branches of the gentian tree, a plant found in Alpine regions around the world, which grows near Le Sentier. They did that so that they could replicate the wonderful polished finish on the bevels of the untreated German silver bridges. As can be seen from the photos there is already some patina on the bridges. Hence for several years, the final polish of the anglage of watches made at the Micro Artist Studio was done with the exact same wood Mr Dufour uses for his Simplicity. But after searching all over Japan a similar gentian plant was found in Hokkaido, not too long ago. So the watchmakers are proud to say their timepieces are now entirely Japanese.

The finishing of the Eichi is technically comparable to Philippe Dufour in my humble opinion. It might even be more perfect technically (look at the mirror finished barrel interior). But it lacks some of the warmth and charm of Dufour, the Eichi movement seems a bit colder. My opinion, however, is subjective. Objectively speaking the movement finishing is impeccable. Despite its eminently traditional high horology finishing, the Eichi is a Spring Drive movement. The Spring Drive is essentially a mechanical movement mainspring and gear train that is regulated by a flywheel instead of balance. The revolutions of the flywheel in turn are regulated by an electromagnet and integrated circuit with a quartz oscillator. The IC and electromagnet are powered by a tiny capacitor that gets it charge from the rotor. This means that the Spring Drive has far superior timekeeping than a pure mechanical, with a maximum deviation of 15 seconds a month.

In addition the movement has a clever torque return system comprising a ratchet wheel beneath the barrel that “recycles” excess torque generated by the mainspring. This extra power is used to rewind the mainspring to extend the power reserve.

Although the Eichi includes much innovative technology, what makes it truly special is its finishing. There are few other watches that are made with an almost outrageous emphasis on finishing, and none from any of the big brands.

The Eichi retailed for about US$74,000, a significant sum. But that is comparable to its few peers, and considering the incredible craftsmanship it is reasonable. That is a moot point anyway since production has ended and all pieces have either gone to end customers or retailers. Already a successor is in the works according to Seiko and that will be something astonishing as well. Enjoy the rest of the photos below. For its 100th anniversary Seiko has created a series of four, blue themed limited edition sports watches, amongst them the Monster SRP455K1.