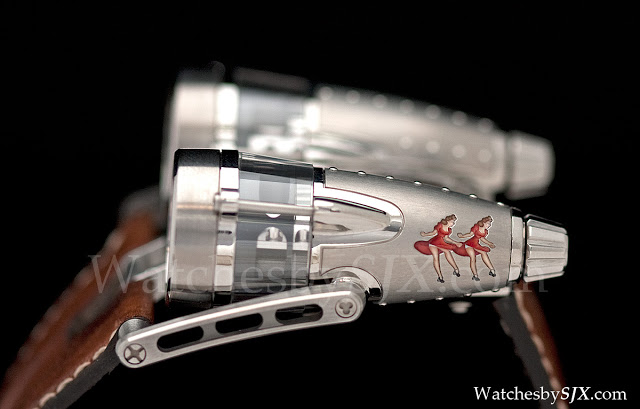 Both the Double Trouble and Razzle Dazzle are variants of the HM4. The case remains titanium but has individually applied titanium across the fuselage.

But the highlights are the painted figures on the case, inspired by the nose art of military aircraft. Painted by Isabelle Villa, the paintings are protected by clear lacquer but additionally the case has actually been machined out so the painting is flush with the surface.

To complete the military look the strap is made from leather requisitioned from vintage Swiss military gear – known as “ammo” straps – and the dials of the HM4 have faux patina. Of course all of that has been shrewdly used by a particular brand to great effect.

The rivets and nose art are absolutely perfect for the HM4. There is no doubt about that. But this decoration makes the HM4 seem more like a toy than it already is. But then again that’s the point of such a watch. Both the Razzle Dazzle and Double Trouble are each a limited edition of eight pieces. And there are 16 people in the world who will want this on their wrist. This is the third variant of the HM4, the second being the piece unique HM4 for Only Watch 2011. – SJX