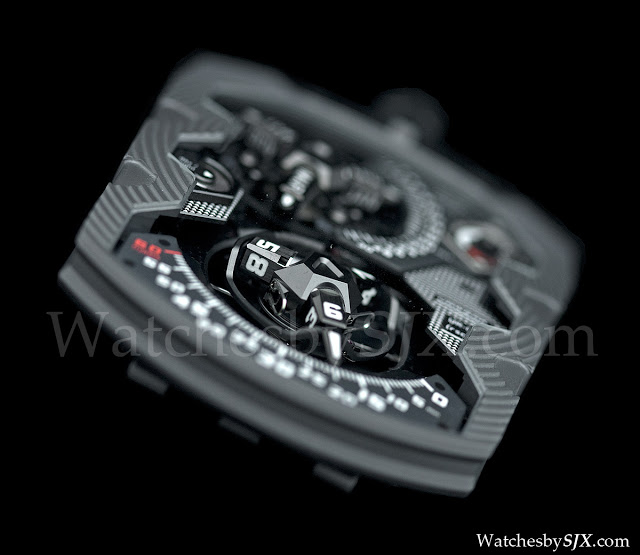 Felix Baumgartner of Urwerk was just in Singapore to present the UR-1001 Zeit Device – the “mothership” as he calls it. That is a most appropriate name. It looks like a spaceship and up close its lines and details are reminiscent of something from a sci-fi film, almost like a city of the future. Other Urwerk creations also give that impression, but none more so than this. After four years of development, the Zeit Device was just unveiled a few days ago and Singapore is Felix’s first stop on a world tour.

It is actually quite large, a bit smaller than an iPhone but hefty at 420 g (about a pound). The case is AlTiN (ALuminium TItanium Nitride, a hard ceramic coating) coated steel and titanium; most of the weight comes from the ARCAP base plate and main plate, according to Felix. Eight pieces will be made in this material and Felix revealed additional versions will be introduced in the future. Priced at about CHF350,000 it is extremely costly, even for what it is, but an uber-cool toy. And there surely are more than eight people in the world that will want one, and can afford one. Functions

On the front, the UR-1001 indicates the time, along with an annual calendar. Both are indicated by satellite displays – rotating cubes that tell the hour or month. The time display also has a retrograde minute hand, like that on the Harry Winston Opus V. Felix, quoted in the press release, explains the calendar mechanism: “At the end of 30 day months — April, June, September and November — the date advances automatically to the 1st of the following month. The date wheel has 93 teeth and goes around in three months carrying the three-armed carousel. Mounted on the date wheel are three Maltese crosses, each corresponding to a satellite of four months at the opposite end of the date wheel. At the end of the short months, a finger on a Maltese cross intervenes to make the date wheel advance two days to the next month.”

And hidden below the calendar satellites is a seconds hand. Also on the front are the power reserve and day-night indicator. Flip it over and it opens to show the movement. The back shows the “oil change” service indicatior (once every five years) and a 100 year counter in decades.

Across from that is the millennium indicator, indicated in centuries. Below sits the reverse of the flying time platform (anchored on only one side like a flying tourbillon), revealing all the wheels and springs that animate the display. The UR-1001 has an automatic winding mechanism and is delivered with a customised winder that gently swings the watch like a pendulum every 15 minutes.

Felix explained that much of the components for the movement, including the parts of the satellite display like springs and carrousels, are manufactured in-house by Urwerk. That, he rightly says, is unusual for an independent watchmaker and a significant point of difference.

With its colour, shape and texture, this is a very powerful looking object. The weight only adds to that impression.

The UR-1001 demonstrates a much higher level of finishing than previous Urwerk creations. Both in terms of decoration like Cotes de Geneve and perlage, but also in its detailing, like the Clous de Paris on the plates. While the decoration is not quite traditional haute horlogerie standard, it is an improvement for Urwerk and still fits in with the aesthetic of the watch. Similarly the case is beautifully machined with ribbed finish on the front and a smooth finish on the back. Combined with its heft, the tactile feel is excellent. The crown and crown guard are also massive yet precisely machined. Even the hinge for the back cover is massive and beautiful to behold. And it is delivered with an equally massive chain.